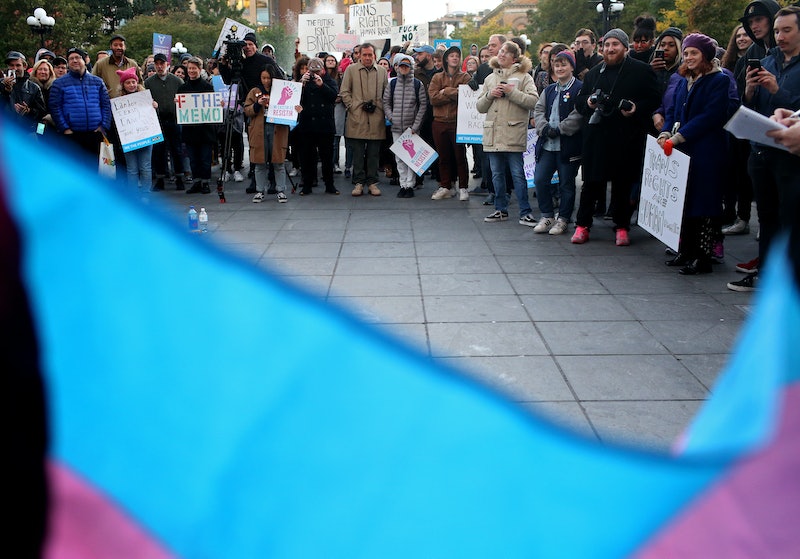 Activists are responding to the death of a woman who was reportedly removed from the United States after attempting to seek asylum. The victim — identified by the LGBTQ newspaper Washington Blade only as Aurora (and sometimes Camila) — was a transgender woman who reportedly died after being deported back to her native country, El Salvador.

Details of her death are currently unknown, although the Blade report indicates that she was attacked outside of San Salvador, the country's capital. She had originally migrated to the United States through one of the migrant caravans that traveled north last year, per the Blade.

“She migrated to the U.S. because of threats that she had received, but she was deported because they didn’t believe her,” independent LGBTI advocate Aislinn Odaly's told the paper of Camila's death.

The advocacy group Asociación Aspidh Arcoiris Trans told the Blade that Camila had gone missing at the end of January. After looking for her at various medical centers, the group reportedly learned that she had been admitted to a hospital. She died on Feb. 3, per the Blade. Gay Star News reports that she was 29 years old. She had reportedly been in El Salvador for four to five months before her death.

Camila is the second trans person known to be killed in El Salvador in the last month, according to reports. The first victim was a trans woman named Lolita, who the Blade reports was killed with a machete on Feb. 8. She was 20 years old, reports Gay Star News. Advocates who spoke with the Blade said that they were demanding that their deaths be investigated.

“It is unfortunate that although we have articles in the penal code that [allow for the classification of] crimes committed against trans people as hate crimes, they are not put into practice,” Miss Trans El Salvador 2018 Tatiana Molina, who is also an activist, told the Blade. “Such is the case of all the crimes that have occurred in recent years and specifically the cases of Camila and Lolita. That is why we are demanding justice and the prompt investigation and prosecution of these cases.”

El Salvador has one of the highest murder rates in the world, according to Amnesty International. The nonprofit has also said that the country is one of the most dangerous places to be a woman because of the prevalence of gender-based violence.

“We want justice and that these cases are investigated and the reformed penal code procedures to be applied when those who are responsible are found,” Ambar Alfaro, projects coordinator of Asociación Aspidh Arcoiris Trans, told the Blade. “Although we have begun the year badly, we hope these crimes establish precedents for there to also be a positive legal framework that regulates the situation of trans people, especially the situation of violence and insecurity.”

The Blade reports that El Salvador's judicial system does not have a reputation for consistently investigating alleged hate crimes. It's not clear whether there is an investigation into either Camila or Lolita's death.