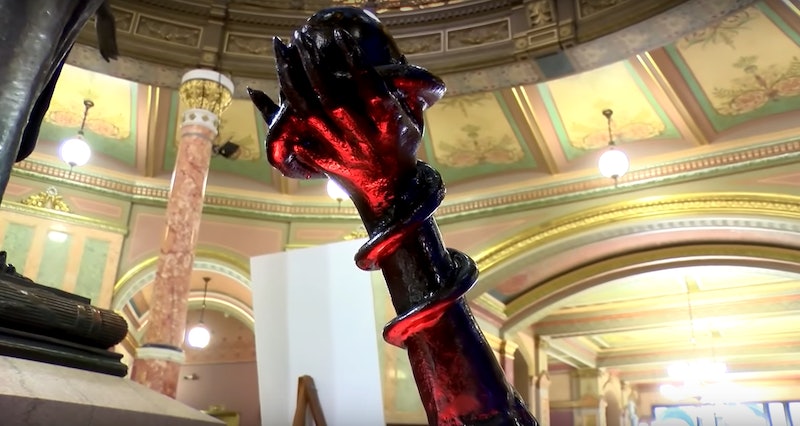 Don't look now, but there's a Satanic statue in Illinois' state capitol, and it's on display right next to the Christmas tree, nativity scene and menorah. The Chicago chapter of the Satanic Temple put up the display, which depicts an outstretched hand holding an apple as a serpent snakes its way around the wrist. "Knowledge is the greatest gift," a plaque at the base of the statue reads.

"Our attorneys felt that there’s no question that it’s a First Amendment issue, and this group had a right to express their thoughts," Dave Druker, the press secretary for the Illinois secretary of state's office, told NBC News. In a separate interview with KCBY, he explained that because the capitol building is public space, the state can't censor the contents of any privately-funded displays that are placed there.

Although its name might bring to mind a devil-worshipping cult, the Satanic Temple is a nontheistic organization that "does not forward supernatural theories of the universe," its website makes clear. In fact, it's as much a progressive activist group as it is a religious organization, and is quite politically active. Its mission, according to its website, is to "encourage benevolence and empathy among all people, reject tyrannical authority, advocate practical common sense and justice, and be directed by the human conscience to undertake noble pursuits guided by the individual will."

In 2015, the temple filed several lawsuits in Missouri to overturn the state's abortion restrictions, arguing that the laws violated the religious freedoms of a temple member ("One’s body is inviolable, subject to one’s own will alone" is one of the temple's seven tenets). Those cases are still making their way through the courts, but one of them has already succeeded in ending mandatory ultrasounds in Missouri abortion clinics. When anti-abortion groups in Detroit planned protests outside of Planned Parenthood in 2015, the Satanic Temple held counter-protests.

The temple announced its plans for the statue in November, writing on Instagram that it was "bringing a message to the Illinois state capitol that religious freedom means freedom of representation for ALL religions...not just the ones that don't offend Christians."

The reaction to the display, which will stay up until Dec. 29, was mixed, according to local reports.

"I don't see a problem with it," one local told WMBF. "It seems like it's a part of the freedom of speech and it doesn't project a bad message." Another local, however, said that she thinks the display is "inappropriate because it's not something that should be displayed for a lot of people to be offended by."

This isn't the first nontraditional holiday display to go up in the Illinois capitol. In 2008, a man erected a metal pole in honor of Festivus, the secular holiday popularized in a 1997 episode of Seinfeld, in the rotunda. There's also at least one explicitly anti-religious display in the building, according to NBC News: a sign put up by the Freedom from Religion Foundation, which reads, "Religion is but myth and superstition that hardens hearts and enslaves minds."