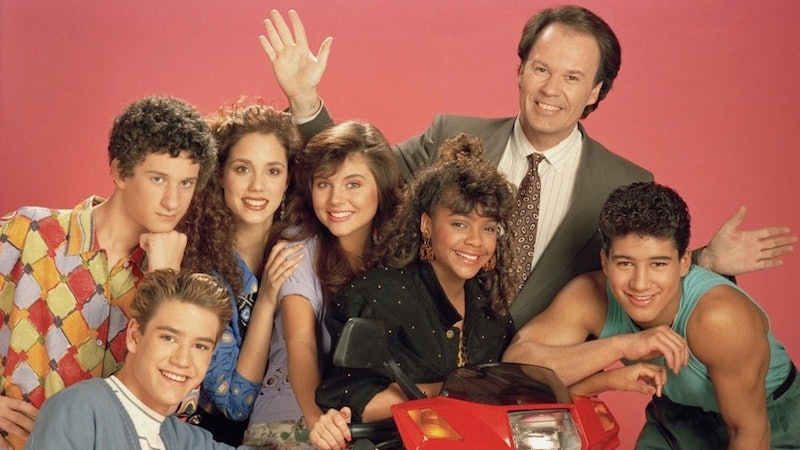 If you loved watching Zack Morris, Kelly Kapowski, and A.C. Slater get into all sorts of trouble and adventures from 1989 through the early '90s, then you're going to need to pop a squat for this news. A Saved By The Bell reboot is happening on NBC's upcoming streaming service. The Wrap reported the news on Sept. 17, revealing that a couple original members of the cast are already signed on to return.

The Saved By The Bell reboot will launch on NBC's new streaming platform, Peacock. And though the show does not yet have a premiere date, it does have a synopsis:

When California governor Zack Morris gets into hot water for closing too many low-income high schools, he proposes they send the affected students to the highest performing schools in the state — including Bayside High. The influx of new students gives the over privileged Bayside kids a much needed and hilarious dose of reality.

Seems like a nice plot combo of Netflix's Élite (probably without all the crimes and murder) and Bring It On, sort of. But either way, Bayside High is going to be revisited, this time with a new set of kids navigate life at that high school. This will be the second return to Bayside High since the original show. A spinoff, Saved by the Bell: The New Class, also followed new students in the iconic school over the course of seven seasons, airing from 1993 to 2000.

According to The Wrap, the new show will be executive produced by Tracey Wigfield, who will also be writing for the series as well. Wigfield has produced and written for shows such as 30 Rock, The Mindy Project, and Great News. Peter Engel, who developed and produced the original, will be coming back to the reboot, along with producer Franco Bario. These two are both more than familiar with these kids and the world of Bayside, considering they also went to work on the spinoffs Saved by the Bell: The College Years and The New Class.

So which of your favorite Bayside students is coming back this time around? According to The Hollywood Reporter, Mario Lopez and Elizabeth Berkley will reprise their roles as A.C. Slater and Jessie Spano, respectively. Considering they were an item on the show back when it aired, it's possible this reboot could be their happily ever after. And considering the plot involves Zack Morris, fingers crossed that Mark-Paul Gosselaar will make an appearance. Though nothing with Gosselaar has been confirmed, THR reported that sources say "talks" are happening.

Gosselaar, who is starring as Bow Johnson's father, Paul Johnson, in the upcoming black-ish spinoff, mixed-ish, recently talked to Entertainment Tonight Canada about a possibility of returning to Saved by the Bell for a potential reboot. "I don't know the involvement that we can have," he said in a clip released Sept. 16. "I'm an ABC/Disney employee, so I don't know how much I can do. But I would love to be a part of it in some capacity." So, it sounds like there are some obstacles if NBC wants Zack Morris to be more than just a name mentioned on the show, but clearly there's still hope.

The new Peacock streaming service will launch in April and already has an impressive lineup. Other reboots to look out for from Peacock are Battlestar Galactica and Punky Brewster. Not to mention the over 15,000 hours of content that will be available on the site, including all seasons of Parks & Recreation. There are so many reboots and streaming services to keep up with now, but considering the timeless classics and hilarious comedies the channel has up its sleeves, it might be worth a look.