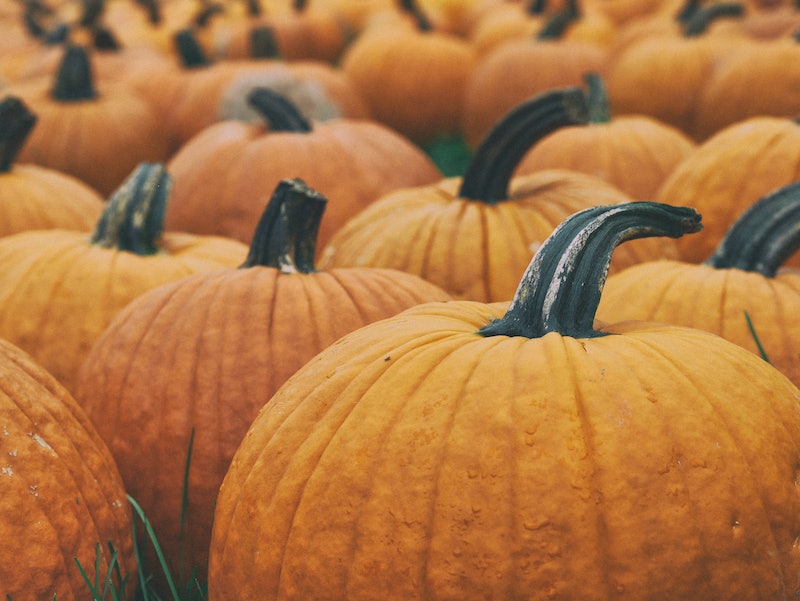 You guys, we need to talk. The pumpkin spice craze has gone too far. People are drinking it, eating it, rubbing it on their bodies, and using it to perfume the air, which apparently is not a pleasant scent. A strange smell caused a school in Baltimore to evacuate its students the afternoon of Oct. 5. As officials attempted to track down the source of an offensive odor, it turned out to be a pumpkin spice plug-in air freshener, according to the Washington Post.

In fact, the smell was so strong that some students and teachers struggled to breathe, and a few were even taken to the hospital as a precaution. "The Baltimore City Fire Department, quickly arrived to assess the safety of our students and the building," Cristo Rey Jesuit School said in a statement. "Emergency medical technicians evaluated several staff members and students, some of whom were treated on the scene. Five members of our community were transported to area hospitals as a precautionary measure."

This situation is basically my worst nightmare. I would have been the first one fleeing the school when an offensive odor wafted into the room because these air freshener thingies that are designed to smell like pumpkin spice or ocean breeze actually smell like toilet bowl cleaner more often than not. And, those fake smells give me migraines, which in some cases can mean a trip to urgent care or the ER.

In this case, thanks to the the unwelcome pumpkin spice scent, classes were canceled for the rest of the day, and students resumed school Friday, Oct. 6 in a pumpkin spice-free environment. WBAL-TV reported that despite the smell not being life threatening, Baltimore Fire Chief Roman Clark said the school did the right thing by calling them to investigate the pungent pumpkin spice smell.

"It's always best to take precaution, call 911, let us — we are the experts — come in and make sure that everything is safe, so we have no problem with them making this call," Clark told WBAL-TV. "I know it's a lot of equipment that you see around here, a lot of firefighters that are working on this incident. However, we want to make sure that these students and teachers are all safe."

With fall in full force, it's not surprising that students and teachers might want to bring a little pumpkin spice to school. "From an emotional standpoint, pumpkin spice evokes the comfort of a cozy kitchen and good things baking in the oven," Eliza Cross, author of the Pumpkin it Up! cookbook, told 10Best. "More than any other flavor, I think pumpkin spice encompasses the sweet comfort of being home."

However, it might be time to admit that we have a pumpkin spice problem. Because, everything in moderation, right? I'm sorry to tell you that pumpkin spice lovers might be letting their affection for this fall favorite get a little out of hand. Martha Stewart, and other celebrity foodies, have dismissed the pumpkin spice trend, with Stewart calling it "basic" on Watch What Happens Live with Andy Cohen last month.

Additionally, E! News reported that on a recent episode of Jimmy Kimmel Live, "Kimmel had a frank discussion with this viewers about an issue that could 'affect our lives and many generations to come.' It was so important to him that he encouraged them to 'call your congress people and tell them to put a stop' to this epidemic." Kimmel was indeed referring to the pumpkin spicing of America.

On a more serious note, while the Baltimore Fire Department deemed that the air freshener was not an immediate danger, for people like me who are allergic to certain smells, it could have meant an afternoon in the hospital hooked up to an IV. Even if you're not allergic, some studies have found that artificial air fresheners are actually pretty terrible for you.

"Chemical sprays, plug-ins and gels for home perfuming are hugely popular but investigators warn that they can include an array of hazardous substances which may cause lung damage and tumors, interfere with our hormones and cause such lifelong problems as asthma," the Daily Mail wrote in 2015.

The article went on to say that a study involving Public Health England's Centre for Radiation, Chemical and Environmental Hazards cautioned that plug-in air fresheners produce "considerable" levels of formaldehyde: described by the U.S. government's National Toxicology Program as a known "human carcinogen," which has been linked with cancers of the nose and throat, and can also cause sore throats, coughs, scratchy eyes and nosebleeds.

So, if you must partake in the pumpkin spice spectacle, perhaps you should limit it to food and drinks. Let's avoid the artificial smelly stuff that could cause the evacuation of a public place, or at the very least make people stop hanging out with you because they can't breathe in your overly pumpkin-spiced apartment.