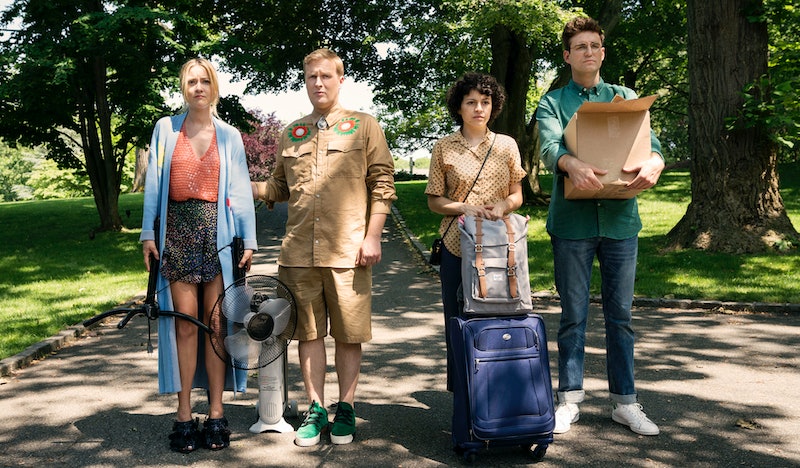 Search Party Season 1 followed a dissatisfied millennial named Dory (Alia Shawkat) trying to track down her old NYU acquaintance, Chantal (Clare McNulty) who went missing. After killing a P.I. named Keith Powell (Ron Livingston) in the Season 1 finale, the second installment followed Dory and her friends messily trying to cover up their tracks. But since the show aired in late 2017 on TBS, here's the Search Party Season 2 recap you likely need before Season 3 premieres June 25 on HBO Max.

It should be noted that Dory, Drew (John Reynolds), Elliott (John Early), and Portia (Meredith Hagner) do an absolutely horrendous job of covering their tracks. First they buy a pink zebra print suitcase (it was cheaper), which is decidedly too small for Keith's body. So they proceed to break his legs and shove the corpse into the luggage, digging a shallow hole in the woods next to a tree with a woman's face on it. We later learn that a strange man calls it his wife and discovers the body while he's having sex with the tree (because of course). They proceed to leave Keith's cellphone on a train headed to a far-off location in Canada and park his car at the station to make it look like he left Montreal.

After the four of them return to the States with Chantal in tow, the series follows each character grappling with Keith's murder. Dory suffers from panic attacks, while Elliott breaks out in hives and starts losing his hair. After showing up manic at his book editor's house, the pathological liar is checked into a psychiatric facility. During the two days that he's there, Elliott tells his therapist what he and his friends did, using the thinly veiled metaphor of a murdered seal (who has a surviving seal daughter).

Drew focuses all his energy on trying to nab a job that just opened up in Shanghai, concocting a sex scandal involving his boss (series co-creator Michael Showalter) to ensure he'll get the job. It predictably backfires. The vulnerable Portia, meanwhile, becomes involved with a creepy theater director named Elijah (Jay Duplass), who insists on calling her North Star. She, too, confesses everything to him.

Eventually, Keith's ex-wife Deb (Judy Reyes), notices her former spouse's radio silence and reaches out to Dory, who was his purported girlfriend. She in turn makes up a story about someone named Fat Franky, whom she says was threatening Keith. Later, Dory breaks into the P.I.'s apartment and sends an email to Deb and their daughter. Then, Drew buries the murder weapon (an obelisk-shaped design trophy) in an open field under five inches of sod. This, too, backfires.

Then there's Chantal, who tells everyone that she went to a dirty motel in New Hampshire (inspired by a terrible poem she wrote, which she was convinced was "going to do the rounds online") instead of the Quebecois mansion she was actually holed up in. But the affluent 20-something doesn't stop there, claiming that she was kidnapped, which piques freelance journalist Julian's (Brandon Micheal Hall) interest. He writes an article framing Chantal as a liar, and everyone becomes upset at him for questioning an allegedly abused woman's story (which, fair).

All of this, paired with Drew and Dory's sweaty alibi, convinces Joy Hartman (Tymberlee Hill), a detective investigating Keith's murder, that the four kids are guilty. But before she can arrest them, Deb's partner Crystal visits Joy at the police station and divulges that there are actually five mobsters named Fat Franky (but don't ask her how she knows that, because her brothers' lives are hard enough as it is!!), one of whom has dealings in Canada.

While Detective Hartman is there following Crystal's lead, she accidentally murders Fat Franky, next shooting herself in the arm so it looks like there was a struggle. Joy returns to New York claiming that the Mafioso confessed to Keith's murder before he died. This is, of course, a lie, and Joy knows that the kids are responsible, since Chantal confessed that they weren't in New Hampshire at all, but in Montreal, where Keith's body was found.

To further complicate matters, Drew's neighbor April overhears the four friends freaking out from her apartment and records their murder confession on a Talkgirl cassette tape recorder. She leaves Drew several threatening messages before blackmailing all four of them for $60,000, later upping the amount to $100,000 after she catches Dory and Drew breaking into her apartment for the tape, because it turns out she has an identical twin named June, whom Elliott and Portia were following instead of her!

While all of this is happening, Dory and Julian begin working on Mary Ferguson's (Succession's J. Smith-Cameron) Senate campaign. The politician soon begins sexually harassing Julian, and he asks Dory what to do after Mary sends him suggestive photos.

She decides to use Mary's inappropriate behavior as leverage, offering the photos to April in exchange for her incriminating confession tape. They meet on the Staten Island Ferry to swap evidence, but after April promises Dory that she's never going to leave them alone, she impulsively pushes her neighbor overboard. Dory then attends Mary's election party, where she is arrested for the murder of Keith Powell. What happens after Dory's arrest will surely be plenty of fodder for Search Party Season 3.