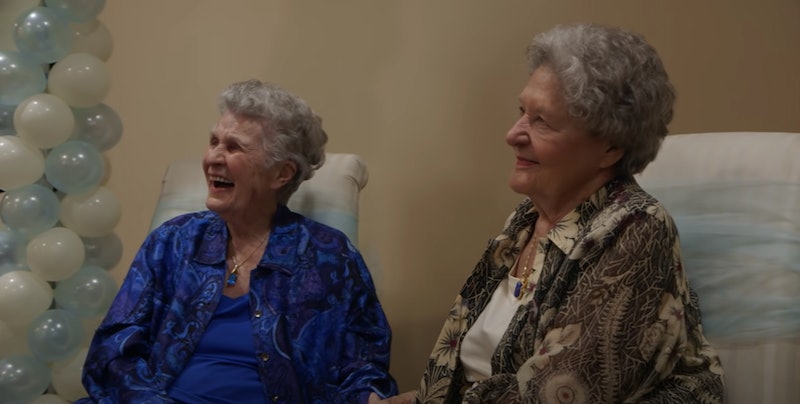 Though there is still considerable risk living as an out-and-proud member of the LGBTQIA community to this day, it's important to remember that things were very different not too long ago. Such is the story behind A Secret Love, a coming out documentary (on Netflix now) that focuses on an elderly couple who kept their relationship a secret up until just a few years ago. The real life couple in A Secret Love, Terry Donahue and Pat Henschel, were together for 71 years, and each lived quite a life.

A Secret Love — which was directed by Donahue's great-nephew, Chris Bolan — follows Donahue and Henschel after they came out to their families in 2009, spotlighting their final years together as a now-public couple. According to Refinery29, Donahue and Henschel met in 1947. At the time Donahue was 22 and a catcher playing in the All-American Girls Professional Baseball League, which inspired the 1992 classic A League of Their Own. Donahue met Henschel that year while in Canada during her off-season.

As TIME reports, they became inseparable, with Henschel traveling around the country to watch Donahue in all of her games. "We always wore dresses, makeup, the whole thing," Donahue shared in the doc's trailer. "Anybody who was not me, they simply didn't know." They eventually moved in together in Chicago, where they would settle down and even work together at an interior design firm, according to The Chicago Tribune. But they continued to keep their relationship a secret until they were in their eighties.

After facing a series of health challenges — mainly Donahue's diagnosis with Parkinson's disease — they decided to come out to their family. "She didn’t want to go to the grave feeling like she’d lived a lie," Bolan told TIME of Donahue's decision to come out. The pair moved back to Canada to be closer to their loved ones, where they remained until Donahue's death in 2019, at the age of 93.