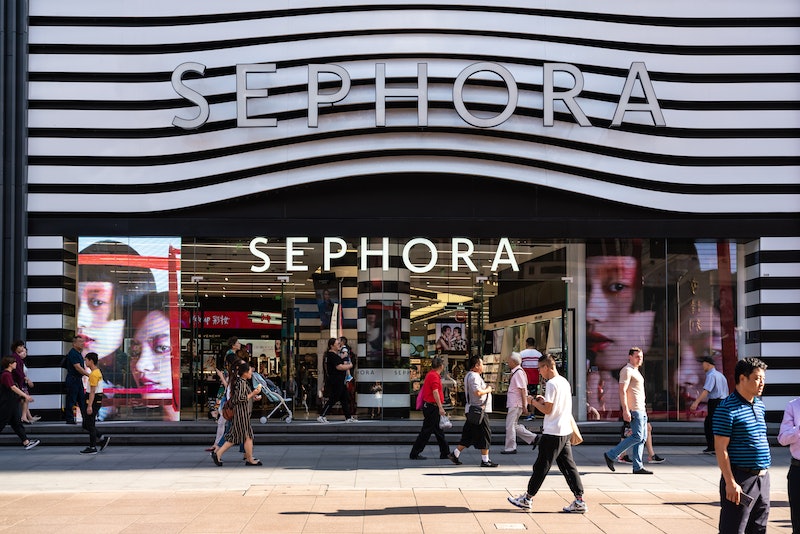 Sephora employees are just trying to do their jobs. But if you've walked into a store in hopes of just grabbing your items and checking out, sometimes, you just don't want someone to ask you if they can help find your perfect shade of red. Enter Sephora's color-coded shopping baskets. Twitter user Cami Williams posted a photo of every introvert's dream shopping experience, and the internet is in love.

In her tweet, Williams posted a photo from a Sephora store which featured two different types of shopping baskets: one red, one black. Signs above the containers explained that red baskets are for those looking for assistance while the black baskets are for customers who'd like to shop solo. Williams captioned the photo, "There is a fellow introvert on the Sephora customer experience team who deserves A RAISE RIGHT NOW."

As of press time, Williams' tweet has over 200,000 likes and over 46,000 retweets. Other Sephora shoppers have declared the color-coded baskets as the "most beautiful thing" they've ever seen and that they'd "throw handfuls of money" at a store who adapted a similar model to the one in Williams' picture.

As for where you can find this Sephora shopping experience, Williams did not share the location, but Bustle reached out to the retailer for comment on the sales model. Turns out, the baskets are a European-only program.

However, Bustle also asked Sephora if the color-coded baskets would ever make their way to the United States. As of press time, the retailer has not responded to the request for comment. But introverts, a lack of an answer is not a no. You can still hold out hope for your future Sephora shopping experiences.

Sephora responded to Bustle's request for comment with the following: "Sephora’s around the world pilot new opportunities. We’re watching to see the consumer response to this!”

According to users on the thread, the idea of color-coded shopping baskets isn't unique to Sephora. The Daily Dot reported in 2016 that a Reddit user uploaded a similar image from an Innisfree store, a Korean-based skin care and makeup brand with locations in several East Asian countries. Just like Sephora's shopping options, the Innisfree location allowed customers to decide whether or not they wanted assistance or to shop alone.

Could Western stores catch up to the ideas of Innisfree and Sephora's European locations? For introverts and solo shoppers, let's hope so.