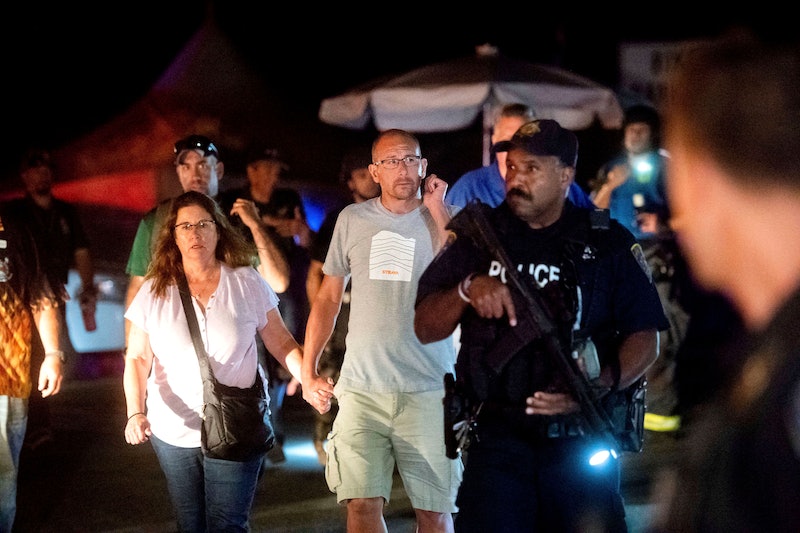 At least three people were killed and more than a dozen others were injured late Sunday in a shooting at a food festival in northern California. Reports of a shooting at the Gilroy Garlic Festival began around 5:41 p.m. local time, Gilroy Police Chief Scot Smithee said in a news conference, and a suspect was ultimately shot and killed by police. An investigation is ongoing.

"It's sort of a nightmare that you hope you never have to live in reality, but unfortunately we find ourselves in circumstances where we have to live this today," Smithee said.

The Gilroy Garlic Festival, founded in 1979, is described on its website as "the world's greatest summer food festival." The three-day event takes place at Christmas Hill Park in Gilroy, California, which is about 30 miles south of San Jose, and the shooting occurred toward the end of the final day of festivities.

A 6-year-old boy, Steven Romero, was among the three people killed in the shooting, his family members confirmed to news outlets. The other two people have not yet been identified.

"My son had his whole life to live and he was only 6," Alberto Romero, Steven's father, told NBC Bay Area. "That's all I can say."

The suspect cut a fence in order to gain access to the festival grounds without going through security, according to Smithee. Police engaged the suspect in less than a minute after there were reports of shots fired, he said, and the suspect was shot and killed.

Festival attendees described a chaotic scene as the suspect opened fire. Cynthia Saldivar, who was working the festival, told CNN that at first she thought she heard fireworks.

"All of a sudden, around I think it was 5:30, co-workers and myself heard what sounded like fireworks," she told the news outlet. "And we looked toward the area that it was coming from and everyone stood still for a second, and realized it was gun shots. Everyone started running out towards us, up the hill to the street to be safe. Then I saw some people shot, some doing CPR on others."

Taylor Pellegrini, 25, also told The Los Angeles Times that she thought she heard firecrackers before realizing what she actually heard was gunshots.

"People were yelling 'active shooter, active shooter,' and some people tripped and stayed on the ground so bullets didn't hit them," she told the newspaper.

Singer Jack van Breen's band, TinMan, was starting an encore performance when the shooting began, according to the Associated Press. He told the AP that the band dove under the stage when they saw the gunman fire into the food area and their audience began screaming and running.

Van Breen also told the AP that he heard someone shout at the gunman, “Why are you doing this?” and heard him reply, “Because I’m really angry.”

How Many Suspects Are There?

Police have yet to publicly identify the gunman who was killed or share any information about a motive. Smithee said in the news conference that the gunman was carrying "some type of a rifle," while the City of Gilroy described the weapon in a statement as "an assault-type rifle."

Witness Julissa Contreras told NBC News that she saw "your average white guy," who she described as looking like "he could work private security," wordlessly firing a weapon. Ryan Wallace, a vendor at the festival, told NBC that he saw the gunman dressed in a police-like uniform and described him as "walking like a police, like he wanted to get stuff done."

Smithee said that in addition to the suspect who was killed, there may have been a second suspect. He said police didn't know if any second individual participated in the shooting or supported the first suspect in some other way.

"We believe based on witness statements that there was a second individual involved in some way,” he said in the news conference. “We just don’t know in what way.”

Police continue to investigate the shooting, including the possibility of a second suspect. Authorities will hold a press conference at 10 a.m. local time Monday, according to Gilroy Mayor Roland Velasco, who added in a Facebook post that "there won’t be a lot of new information but rather setting the expectations for what the investigation will look like during the day."

Meanwhile, those injured in the shooting were being treated at St. Louise Regional Hospital, Santa Clara Valley Medical Center, and Stanford Hospital, according to CNN. At least five people who were injured were treated and released, according to the Associated Press.

"It's been a long and sad day," Velasco wrote on Facebook.