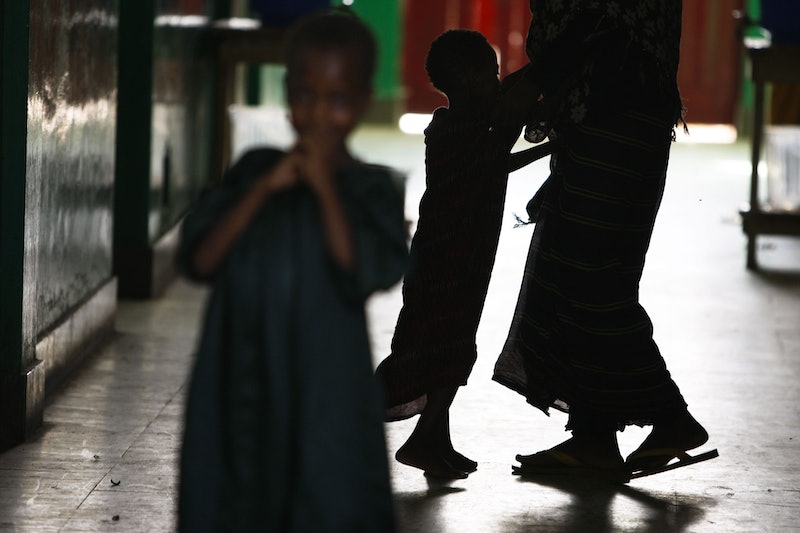 Activists are hoping the death of a 10-year-old Somali girl who hemorrhaged after female genital mutilation surgery may help raise awareness about the dangerous health risks associated with the ritual in a country where 98 percent of women and girls are cut. Deeqa Dahir Nuur bled to death earlier this week after being subjected to female genital mutilation in one of Somalia's few reported FGM-related deaths.

Activists said Nuur died of a hemorrhage at Dhusmareb hospital on Monday, two days after her family had taken her to a cutter for female genital mutilation in Olol village. "The circumciser is suspected to have cut an important vein in the course of the operation," Hawa Aden Mohamed, the director of a local women's right group known as Galkayo Education Center for Peace and Development (GECPD) told Reuters. But by the time Nuur's family realized they wouldn't be able to stop the bleeding by themselves, it was too late.

Nuur's death is one of only a few female genital mutilation-related deaths to have ever been reported in Somalia, a country with the world's highest rate of FGM practice. But activists have said that just because FGM-related deaths aren't reported doesn't mean they aren't happening.

"It is difficult to estimate the number of girls who die due to FGM per month or per day because they are [sworn] to secrecy, particularly in rural areas," Mohamed told The Guardian. "We only get to hear of the few cases of those bold enough to seek medical treatment in towns. But from the stories we do hear, they could be in their dozens."

The World Health Organization estimates that 98 percent of women and young girls in Somalia are subjected to female genital mutilation, with the majority of them undergoing the procedure between the ages of five and nine. In fact, Somalia's high rate of female genital mutilation has continued despite a ban on the ritual being included in the country's constitution six years ago.

Despite the constitutional ban, policymakers in Somalia have yet to pass legislation that would enable legal recourse against those who perform the ritual. Because of this, activists have said that Nuur's death is unlikely to result in any prosecution or punishment.

"The woman who performed the operation has not been arrested but even if she was, there is no law that would ensure she is punished for the act," Mohamed told Reuters. "This is just one among many cases happening on a daily basis across Somalia."

But activists are hoping that, if Nuur's death won't inspire legal action, it might at least help better educate others as to the dangers of female genital mutilation.

"It is really important that this is a confirmed case, as pro-FGM lobbyists sometimes put forward the nonsensical view that it is not harmful," Brendan Wynne of Donor Direct Action told The Guardian. "This is completely untrue. It often has lifelong medical and psychological consequences – and, as we have seen, [can lead to] death. We have no more time for any debate on the harms of FGM and this case, like many others, proves that."