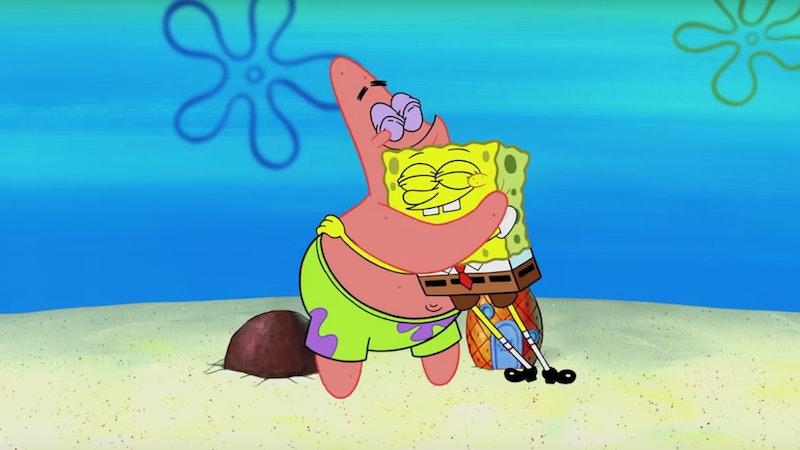 Before SpongeBob SquarePants lived in a pineapple under the sea, he spent his summers at a sleepaway camp. As per a Deadline exclusive, an upcoming SpongeBob Squarepants prequel is in the works on Nickelodeon and it will reunite fans with their favorite sponge. Nickelodeon has officially greenlit a SpongeBob SquarePants spin-off prequel with the working title Kamp Koral, an animated series that will follow a 10-year-old SpongeBob during his time at summer camp. SpongeBob SquarePants veterans Marc Ceccarelli and Vincent Waller will executive produce the prequel, which follows a young SpongeBob and his fellow camp friends as they “spend the summer building underwater campfires, catching wild jellyfish, and swimming in Lake Yuckymuck at the craziest camp in the kelp forest” of Kamp Koral. OK but, tell us more about underwater campfires.

Deadline reported that Nickelodeon has placed a 13-episode order for Kamp Koral. Unlike the original SpongeBob Squarepants — which debuted in a “classic 2D cartoon” format — Kamp Koral will debut as a computer-animated series, so don’t be alarmed if the series looks a little… different. While a release date has yet to be set for the prequel, Kamp Koral is slated to begin production this month in June. In the revered words of everyone’s favorite burger-flipping, jellyfish-catching sponge himself, “I’m ready!”

Kamp Koral's announcement comes during a monumental time for the series: Next month, SpongeBob SquarePants will celebrate its 20th anniversary on July 17. Created by Stephen Hillenburg, SpongeBob SquarePants serves as the longest-running animation series on Nickelodeon. The series debuted on the network in 1999. Ramsey Naito, Nickelodeon’s EVP Animation Production and Development, told Deadline of SpongeBob’s global impact and the Kamp Koral prequel,

“SpongeBob has an incredible universe to expand upon and the greenlight for Kamp Koral is a testament to the strength and longevity of these characters known and loved by generations of fans around the world.”

Additionally, Kamp Koral won’t be the first time SpongeBob creators have dabbled in CG animation for the beloved series. The SpongeBob Movie: Sponge Out of Water, which saw our favorite sea critters hitch a memorable ride on David Hasselhoff’s toned abs, hit the big screen in 2015 in computer animation. A follow-up film The SpongeBob Movie: It’s a Wonderful Sponge is slated for a May 22, 2020 release.

While the animated series has introduced children and adults alike to its beloved sea critters — ditzy Patrick, morose Squidward, southern Sandy, and money-enthusiast Mr. Krabs — SpongeBob SquarePants has also taken on a life of its within internet culture. The characters have inspired countless memes across the interwebs — the sleeping Squidward meme, the savage Patrick meme, and, most recently, the SpongeBob traveling the world meme. Honestly, there’s just too many to account for in one article.

With no premiere date set just yet, fans can tide over their Kamp Koral excitement with the never-ending influx of SpongeBob memes that exist on the internet. And of course, there’s always the 2020 release of The SpongeBob Movie: It’s a Wonderful Sponge. Here’s to hoping David Hasselhoff reprises his role in some capacity.