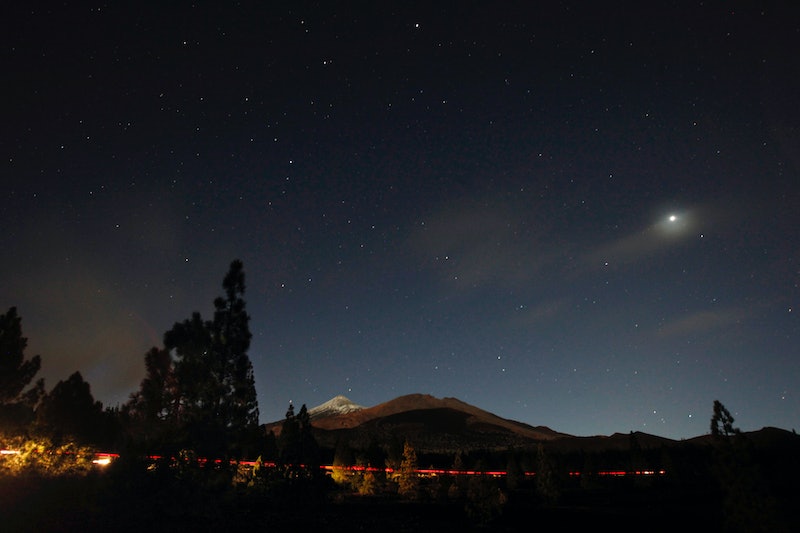 Is it just me, or have the skies been particularly exciting as of late? Perhaps I've just been paying more attention, but it seems that during our lifetime, we're being treated to some highly impressive cosmic events. And now, an upcoming star collision that might be visible to the naked eye is set to make things even more exciting. OK, by "upcoming" I mean it's actually six years away, but hear me out — there are a few reasons why we should bookmark that year for star-gazing. Allow me to explain.

According to Science Alert, astronomer Larry Molnar and his team from Calvin College in Michigan have been keeping track of a binary star called KIC 9832227 — and this is what's predicted to cause a cosmic explosion in our skies. A binary star is actually two stars orbiting each other; in this case, these stars are known as a contact binary, where they share parts of the same atmosphere.

Right now, the stars are getting closer and closer and are set to collide in 2022 — a "one-in-a-million" occurrence, according to researchers. Seasoned star-spotters will know that this merging of stars is what's known as a "red nova," where excess gas causes resulting from the explosion is what may be visible from Earth — and this one is set to be pretty spectacular. As Science Alert reports, the resulting explosion would cause a 10,000-fold increase in brightness, meaning it will be visible from Earth for up to six months.

What also makes this whole thing super interesting is that scientists have never been able to predict a red nova before. Ever. But Molnar believes that this particular event will be “a very specific prediction that can be tested, and a big explosion.”

Science Alert notes that Molnar and his team have a previous example to from which they can draw their predictions. In 2008, another team observed the star V1309 Scorpii explode into a red nova and much like KIC 9832227, the orbital period between the two individual stars started reducing drastically as the collision approached.

Molnar and his colleagues have noticed the same thing happening now, meaning the time taken for the stars to circle each other is shrinking and that if all goes to plan, the collision should occur in 2022 — although there's no word on what month yet, so we'll have to keep checking in as the year grows nearer.

"Bottom line is we really think our merging star hypothesis should be taken seriously right now and we should be using the next few years to study this intensely so that if it does blow up we will know what led to that explosion," said Molnar in a press release from Calvin College.

Remember, though: If this star explosion is visible in 2022, the light we will see from Earth will be an astonishing 1,800 years old.