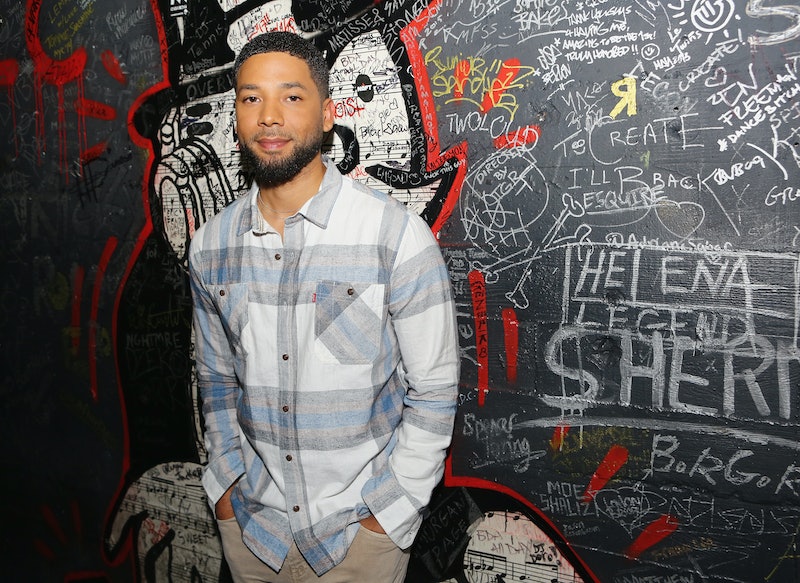 Two days after he was attacked in Chicago, actor Jussie Smollett's family released a statement condemning the "violent and unprovoked attack" on their son. In a statement issued on Thursday, the Empire star's family referred to Smollett as "a warrior whose light cannot be dimmed," and described what happened to him as "a racial and homophobic hate crime."

According to ABC News, Smollett — who is black and openly gay — was walking in Chicago early Tuesday when someone allegedly shouted racial and homophobic slurs at him. Citing the Chicago Police Department, ABC News reported that two men allegedly attacked Smollett by pouring "an unknown chemical substance" on him and wrapping a rope around his neck.

Smollett reportedly told police that his attackers had shouted "MAGA country" during the incident. His music manager, who was reportedly on the phone with him during the attack, told Variety that he "clearly" heard the words "MAGA country" being used, as well as a racial slur. According to TMZ, the two men who allegedly attacked Smollett were both white and wearing ski masks.

Chicago police are reportedly investigating the attack as a "possible hate crime," Politico reported, and have identified two persons of interest, per ABC News. The attack on Smollett swiftly sparked widespread outrage, with celebrities and lawmakers alike expressing solidarity. Singer Cher condemned the attack as an example of "villainy, racism, and homophobia," while California Rep. Maxine Waters slammed the "homophobic haters" who attacked him.

On Thursday, Smollett's family released the following statement, in which they expressed their gratitude for his safety and called for his attackers to be brought to justice:

In the early hours of Tuesday morning, our beloved son and brother, Jussie, was the victim of a violent and unprovoked attack. We want to be clear, this was a racial and homophobic hate crime. Jussie has told the police everything from the very beginning. His story has never changed, and we are hopeful they will find these men and bring them to justice. Our family thanks everyone for their prayers and the huge amount of love he has received. We are thankful to our village for your immense support during this trying time. We are so grateful that God saw him through this cowardly attack alive. Jussie is a warrior whose light cannot be dimmed. We want people to understand these targeted hate crimes are happening to our sisters, brothers and our gender non-conforming siblings, many who reside within the intersection of multiple identities, on a monthly, weekly, and sometimes even daily basis all across our country. Oftentimes ending fatally, these are inhumane acts of domestic terrorism and they should be treated as such. They will continue to occur until we hold each other accountable. Make no mistake, words matter. Hateful words lead to hateful actions. Radical love is the only solution, but passivity will be our downfall. We, as a family, will continue to work for love, equity and justice until it reigns supreme in our nation and all over the world.

Following the attack, the Chicago Police Department released photos of two persons of interest, and have requested the public's help in identifying them.