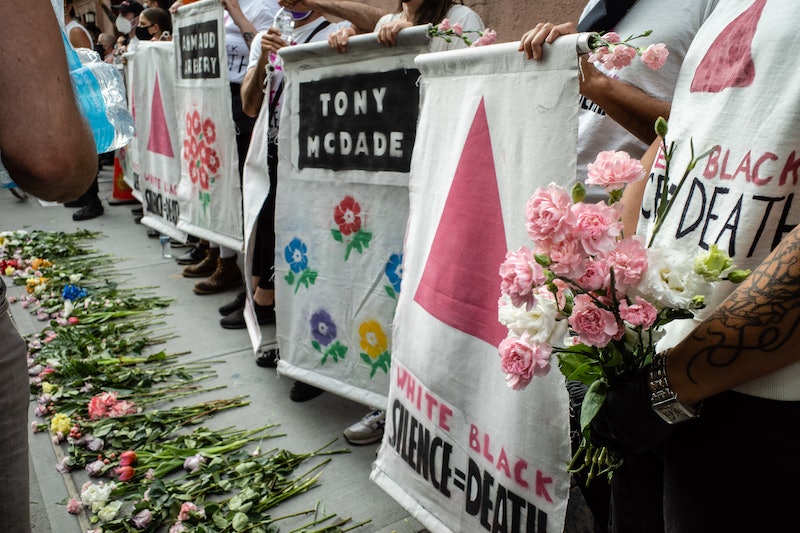 Mark Segal, 69, was 18 years old when he went dancing at the Stonewall Inn one night. He later found himself in the middle of a riot that made LGBTQ history and sparked his lifelong commitment to activism. A journalist and founding member of the Gay Liberation Front, a collective of LGBTQ activist groups that emerged after the Stonewall Riots, he says the anti-police brutality demonstrations sweeping the country today remind him of what he experienced 51 years ago. Though he has been unable to march since he is high risk for COVID-19, he has been proudly watching his neighbors in Philadelphia take to the streets, organizing relief supplies for protestors, and speaking out in solidarity. “If you appreciate what happened at Stonewall, you appreciate all movements for social justice,” he tells Bustle.

Here, Segal describes the similarities between the Stonewall Riots and today’s movement for Black Lives Matter.

When Stonewall happened, the LGBT community was totally invisible. We were considered the lowest form of society. If you were LGBT, you were not allowed to be a doctor, a lawyer, a garbage person — you could be fired, and without anti-discrimination laws, you’d have no recourse. If you were gay, the government criminalized your sex life. You were known to be immoral by the church. Medical society considered being gay an illness to be treated. That was what our oppression was.

All that turmoil from 1968 [the Tet Offensive during the Vietnam War, the assassinations of Martin Luther King, Jr. and Robert F. Kennedy] had spilled over into June of 1969. We had a president that we considered illegal [due to his expansion of the unauthorized war in Vietnam]. In that way, it was very similar to today.

The LGBT community was totally under the thumb of the police department on Christopher Street in New York City. The police would walk the street and they would use their billy clubs on us, they would shout insults, they would arrest people for no reason. It was against the law for a bar to serve alcohol to a suspected homosexual. Stonewall was an illegal bar in that sense. But it was the only place we could be ourselves. For an 18-year-old, that was everything.

The night of the riots, the police raided the bar looking for bootlegged alcohol and people violating the state’s “gender-appropriate clothing statute,” [or cross-dressing]. It was hot outside and we just weren’t going to take it anymore. We decided to take the street back. As they led people outside the bar, there became more of us outside the bar than in it. We made sure the police were barricaded in the bar. They called for reinforcement, and that turned into what is now known as the Stonewall Riots.

We organized for several days. Every single night we stayed out, we challenged the police. I remember marching outside the house of detention on Greenwich Avenue to free Angela Davis. That was a Black rights march, but like-minded civil rights organizations were there because we were all fighting for civil rights justice.

We have shown that the American public wants change.

If you appreciate what happened at Stonewall, you appreciate all movements for social justice. That’s the big connection between Stonewall and the George Floyd demonstrations — we were going up against the police, saying the police had overused their power. I am delighted by what I am seeing in the streets these past nine days. I am so happy to see so many LGBT signs in the crowds, speaking out against police brutality. Because of COVID-19, I worry now also for everyone out there who has marched, especially those who have hugged one another for comfort while marching.

At Stonewall, we were in a position where no elected officials cared about us, so we had to build a movement. That’s why we were out demonstrating every single day. We needed visibility. The numbers out there right now sends a message to every elected official and every police department in the country that change must be made. And now they understand what it means to have their actions and policies put under a spotlight. We have shown that the American public wants change.

To everyone out there getting arrested for protesting today, I say, wear your arrest as a badge of honor. Remember that no one person has control over the word patriot. Our government was born out of a revolution. A revolutionary is a patriot. It’s time to take back that word.

More like this
What The UK Blocking Scotland’s Gender Recognition Bill Means
By Sam Ramsden
The UK Government Is *Finally* Banning Conversion Therapy
By Sophie McEvoy
Gen Z Are Twice As Likely To Identify As Queer, According To New Data
By Sam Ramsden
How Ovulation Affects Your Sense Of Smell, Libido, & More
By JR Thorpe and Lexi Inks
Get Even More From Bustle — Sign Up For The Newsletter
From hair trends to relationship advice, our daily newsletter has everything you need to sound like a person who’s on TikTok, even if you aren’t.