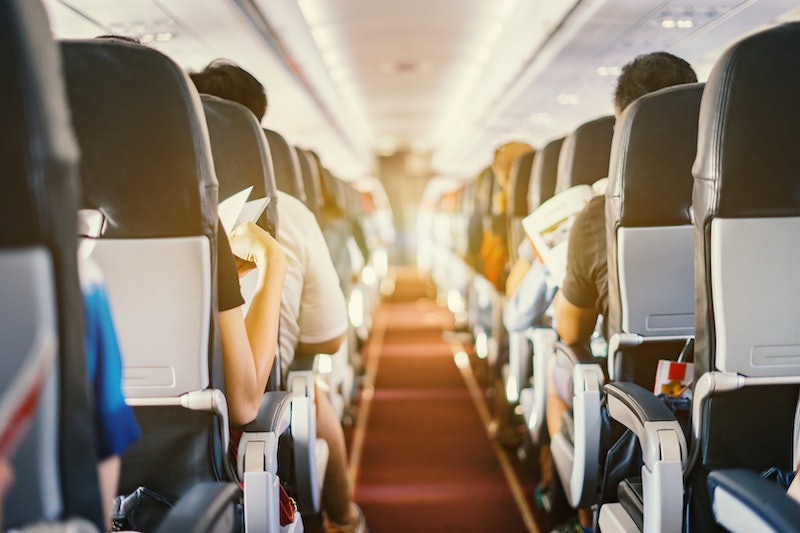 If you've ever gotten off a plane and felt the tingle of a cold coming on, there's a good explanation: airplanes are notoriously germ-y and, especially during the holiday season, increasingly crowded. These are the dirtiest places in an airplane, just in time for your holiday flight home. Don't worry, you still have plenty of time to stock up on hand sanitizer.

For those of us living and working far away from our hometowns, a hallmark of the holiday season is the inevitably, uh, horrible trek home. Crazy highway traffic, long lines at the airport, delayed flights — there's a reason so many Christmas movies feature travel disasters as central plot points. It's a wonder any of us make it home to see the unwrapping of presents.

This year, 6.4 million Americans will take to the skies between Dec. 23 and Jan. 1, according to a recent report by AAA. It's the fourth consecutive year of holiday air travel growth. So, no, you're not imagining things: those security lines really are getting longer. And, according to TravelMath, dirtier.

The travel-centric website recently sent a microbiologist to five different airports and onto four flights, where they collected a total of 26 samples. After sending off the germ-laden tests to a lab, they analyzed the number of colony-forming units (CFUs) per square inch. CFUs, by the way, are individual colonies of bacteria. So when I say that your cellphone harbors an average of 27 CFUs per square inch, I'm not talking about 27 individual germs. I'm talking 27 communities. Neighborhoods. Apartment buildings. Of bacteria.

The results prompted what I feel is a fair question: Where can one purchase a last-minute Hazmat suit and can one wear said Hazmat suit upon a flight?

Studies have estimated that up to 20 percent of commercial airplane passengers develop a respiratory infection within a week of flying. It is a wonder that number is not 100 percent.

Now, the good news is that all 26 samples were negative for fecal coliforms like E. coli, which are not only contagious but carry the potential for far more serious infections than a head cold.

OK. Alright. You got your Lysol spray ready? Are you prepared to see the results? Let's dive in.