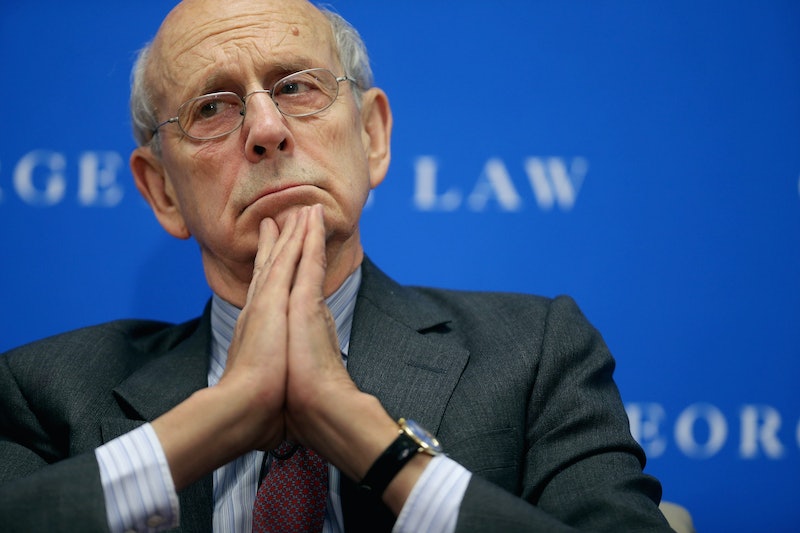 One of the guiding principles of American law is stare decisis, or the idea of precedent. According to this principle, decisions made in previous cases should stand unless there is a very compelling legal reason to overturn them. Justice Stephen Breyer's latest dissent, then, led some to speculate that the SCOTUS justice was warning that Roe v. Wade is in danger because of how some of his fellow members of the court dealt with precedent in the case at hand.

Citing Planned Parenthood v. Casey in his dissent in Franchise Tax Board of California v. Hyatt, Breyer explained potential reasons that could lead to a precedent being overturned:

It is one thing to overrule a case when it “def[ies] practical workability,” when “related principles of law have so far developed as to have left the old rule no more than a remnant of abandoned doctrine,” or when “facts have so changed, or come to be seen so differently, as to have robbed the old rule of significant application or justification.”

"It is far more dangerous to overrule a decision only because five Members of a later Court come to agree with earlier dissenters on a difficult legal question," Breyer wrote. "The majority has surrendered to the temptation to overrule Hall even though it is a well reasoned decision that has caused no serious practical problems in the four decades since we decided it."

"Today’s decision can only cause one to wonder which cases the Court will overrule next," Breyer's dissent finished. "I respectfully dissent."

Several commentators on Twitter took Breyer's remarks on precedent as a "red flag" for supporters of reproductive rights who have expressed concern about the court overturning Roe v. Wade. Some specifically pointed to the line in Breyer's dissent in which he wrote about wondering "which cases the Court will overrule next."

But legal experts tell Bustle that neither the majority's decision nor Breyer's dissent point to anything particularly new or surprising.

"The conservative majority has been overruling many precedents in recent years," Maya Manian, a law professor at the University of San Francisco, tells Bustle. "This is a discussion in this dissenting opinion that could be applied across a wide range of issues, as a sort of hint towards many different legal rules that this five-justice conservative majority seems to have its sights set on."

While some on Twitter were quick to note that Breyer's dissent cited Casey, another landmark case for reproductive rights, Manian emphasizes that that doesn't necessarily tell us anything about what Breyer thinks will happen with Roe.

"[Casey] is well known for its extended discussion of the principles of stare decisis," Manian says.

Drexel University law professor David Cohen tells Bustle that "what we saw today is just the justices fighting about something they always fight about."

Cohen argues that the decision about whether to overturn Roe won't come from precedent; the justices are always going back and forth on precedent and how they apply it, he suggests, depending on the case at hand and their own personal ideologies.