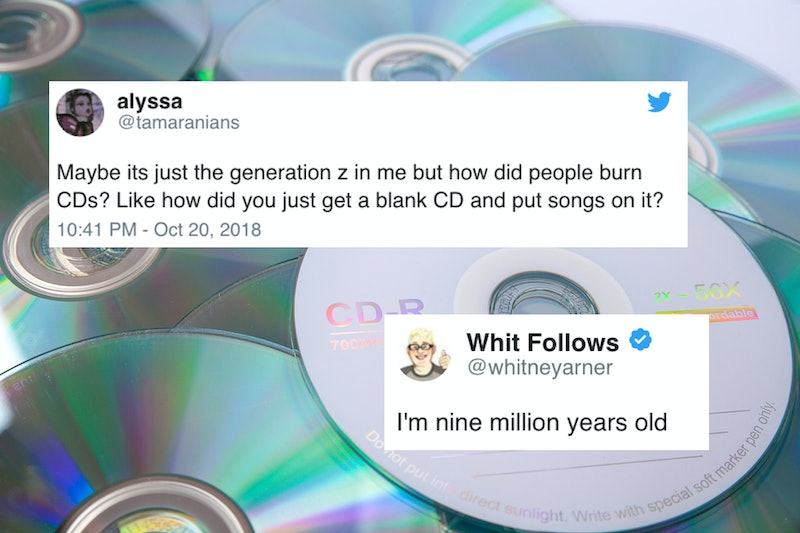 My fellow millennials, hold on to your brittle bones and graying hair, because Generation Z is here to tell us that we are officially Old™. Today’s reminder of your ever-depeleating youth comes from this teen confused by how people used to burn CDs. “Maybe [it’s] just the generation z in me but how did people burn CDs?” Twitter user Alyssa (@tamaranians) asked. “Like how did you just get a blank CD and put songs on it?” If you heard something, that was just the sounds of thousands of millennial crumbling into a pile of old, old dust.

In an interview with BuzzFeed News, 17-year-old Alyssa Lucas (the teen who sent the tweet that launched the rapid aging process of millennials everywhere) clarified that she had seen and even owned CDs before. However, as someone who listens to music primarily through streaming services, Lucas was confused by the process of burning a CD. Lucas told BuzzFeed News that she was at Best Buy and overheard a couple people talking about “how everyone used to burn CDs and make mixtapes.” Thus, she took to Twitter to ask a question she believed to be innocuous. If the over 2,300 comments are any indication, the tweet was far more polarizing than Lucas thought it would be.

Perhaps that most shocking part of the whole situation is that Gen Z still goes to Best Buy.

The majority of the comments of quote-tweets fall somewhere between “oh my god I’m so old” and “OH MY GOD I’M SO OLD!!!!!” Millennials across the Twittersphere likely felt that pang of old age that we gave to generations before us when we asked about record players and floppy disks. “I'm nine million years old,” tweeted Whitney Reynolds, co-host of the podcast ‘I Haven’t Seen That’, to which the millennial internet responded, “Hard same.”

While most of the responses have turned into mid-20-somethings writing their will, lest they fall over and die at any moment, a handful of people gave helpful answers and explained how burning CDs used to work long, long ago in the 90s and early ’00s. “You basically put a blank disk in the cd drive of the computer and add the songs to the disk,” one Twitter user explained, comparing it to how you would add files to a USB drive.

If you’re a teen (hello, teens) and want to take a peek inside the life of a teen circa 2005, gather ‘round the warmth of phone charger and listen close. Before Spotify and Tidal, but sometime after cassette tapes and the initial hayday of record players, young people would pop a CD into their shared family desktop computer as the first step to sharing music. The CD would download to iTunes, Windows Media Player, or a similar music computer program. Then, after ejecting the original CD and inserting a blank CD into the computer, you could copy those downloaded music files onto a second CD, also known as “burning a CD.”

From this was born the now-archaic art form of creating a perfect mix CD, complete with an 80-minute max playlist of downloaded songs from different CDs or illegal music downloading software like LimeWire. It was both a simpler time and much, much more complicated. Imagine having to limited your Spotify playlist to just 80 minutes.

“I can definitely say after all of this, I know how to burn at least 100 CDs if I wanted,” Alyssa Lucas told BuzzFeed News. “I still prefer modern ways of saving music. It’s much easier to just go on Spotify and save whatever I want.”

Despite their nostalgia for doodling on blank CDs and newfound affinity for school Gen Z on the early aughts, most millennials would likely agree.