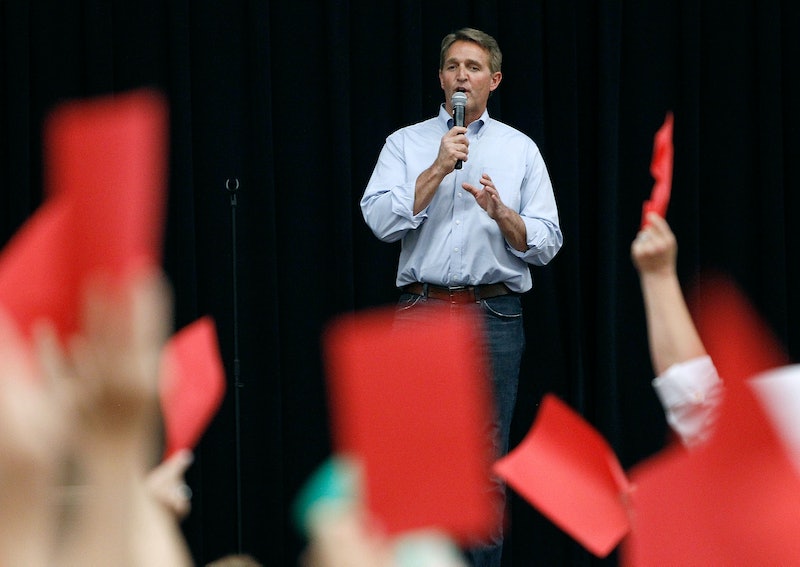 On Thursday, H.J. Res 43 was signed by President Donald Trump. The bill will allow states to block organizations like Planned Parenthood from receiving the Title X funds they currently use to cover the cost of cancer screenings, birth control, and STI tests for low-income patients. Fresh from helping Senate Republicans pass this bill, Arizona Sen. Jeff Flake held a town hall meeting Thursday in Mesa, Arizona, to hear from his constituents.

And hear from them he did. On the same day President Trump signed the bill overturning an Obama-era rule prohibiting states from withholding Title X family-planning money from health care centers and organizations that offer abortion services, a teenager schooled Sen. Flake on Planned Parenthood's importance.

Flake's decision to support legislation enabling states to block health care organizations which provide abortion services — like Planned Parenthood — from being able to receive Title X family-planning money made him a target for criticism for many of his constituents. Among those outraged constituents was 16-year-old Arizona resident Deja Foxx, who taught the senator a few lessons about women's health care and the importance of Title X-funded health centers.

"I just want to state some facts," Foxx said after taking the microphone at Flake's town hall. "I'm a young woman; you're a middle-aged man. I'm a person of color, and you're white. I come from a background of poverty, and I didn't always have parents to guide me through life; you come from privilege."

While cheers from the crowd make the end of Foxx's question inaudible, her message was clear: Why was Flake supporting legislation that would ultimately have major repercussions for women both in Arizona and across the United States? In Arizona alone, the Title X program helps roughly 36,000 people (82 percent of whom are women) each year, the Phoenix New Times reported.

"I'm glad to hear of my privileged childhood," Flake responded, telling Foxx he grew up in a family with 11 children and had been made to pay for his own college education.

"Privilege comes in many forms," Foxx said, to which Flake agreed.

"I've had a lot of advantages that others haven't," he conceded. "What I want is to make sure that everyone can realize the American Dream. That's why I support the policies that I support."

Yet something in Flake's answer wasn't matching up for Foxx. "Why would you deny me the American Dream?" she asked, pointing out to Flake that Planned Parenthood provides services which help her, and other young women like her, be successful and reach for higher education goals. Foxx raised an important point. According to the Arizona Family Health Program, Arizona's teen pregnancy rate would likely jump by 22 percent if Title X-supported services were taken away. The state's rate of unintended pregnancy, unplanned birth, and abortion would likely increase 27 percent.