Texas' health department announced it moved to terminate its contracts with the Heidi Group, demanding the Texas anti-abortion group repay the state after it failed to serve the tens of thousands of women it had promised to, according to The Texas Observer. Along with having to repay more than $29,000 in incurred costs, the Heidi Group, which had been tapped to replace Planned Parenthood as a women's health care provider in state programs, also faces an investigation into its billed costs.

"We worked with the Heidi Group over time on its performance, and we have determined that the Heidi Group is unable to meet the standards of a successful contractor with us," Carrie Williams, Texas Health and Human Services Commission's chief press officer told The Dallas Morning News in an emailed statement. "Contract termination was in the best interest of the state and the clients we serve."

The state agency said it was cancelling the two contracts it had with the Heidi Group — one for its Family Planning Program and the other for its Healthy Texas Women program — as of Dec. 11, The Texas Tribune reported. Bustle reached out to the Heidi Group for comment.

According to Williams, Texas' state health department attempted to work with the Heidi Group to get things back on track through reviews and site visits. But, ultimately, the organization routinely failed to measure up in areas like contract compliance, service administration, or financial and administrative management. 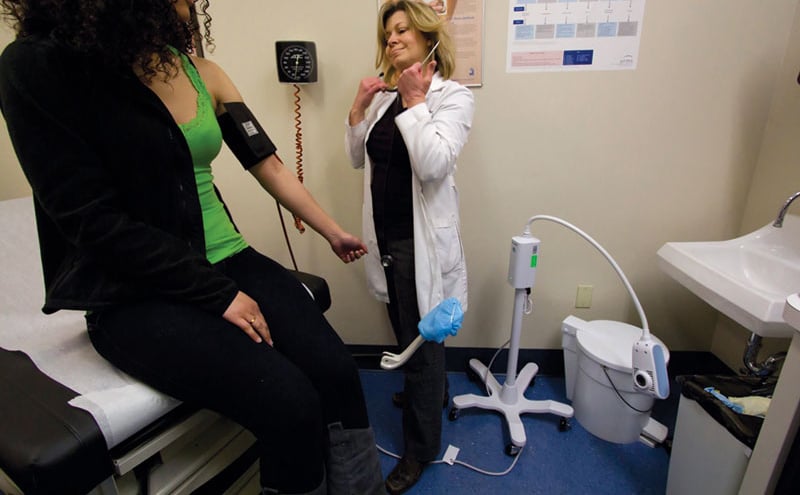 Late last month, Texas Observer reporter Sophie Novack found that the Heidi Group had failed to serve the thousands of women it had promised to after being tasked with replacing Planned Parenthood in Texas' low-income women's health program. (According to The Observer, the state had banned Planned Parenthood from the program in 2013.) In fact, data obtained by The Observer showed that, in 2017, the Heidi Group had served less than 5 percent of the patients it had promised the state it would cover.

While the Heidi Group had vowed to serve roughly 70,000 patients during the fiscal year of 2017, it had in actuality provided care to a little more than 3,300, Novack reported.

Despite this failure, which Novack reported the Texas Health and Human Services Commission were aware of, the Heidi Group's contracts with the state were renewed for a third year. New contracts for fiscal year 2019 began Sept. 1, The Dallas Morning News reported. They're now set to be terminated on Dec. 11.

The Texas Health and Human Services' Office of the Inspector General is currently investigating the Heidi Group for $1.1 million in billed costs to determine if the anti-abortion group owes the state additional money. For now, however, the Texas Health and Human Services Commission has ordered the group pay the state back for $29,431 in incurred costs.

Reproductive rights groups have long been critical of the Texas Health and Human Services' decision to award taxpayer funds to the Heidi Group, which they felt lacked the experience to be a reputable provider. "The Heidi Group was never remotely qualified to provide reproductive health care to tens of thousands of Texans in need," Aimee Arrambide, the executive director at NARAL Pro-Choice Texas, said in a statement released Friday. "Family planning dollars should go directly to medical providers who have experience providing family planning and preventive care services, not anti-abortion organizations that aim to coerce and manipulate."

"We encourage the Legislature to remove the restrictions on qualified providers from participating in these programs in order to prevent this sort of waste in the future," she added.