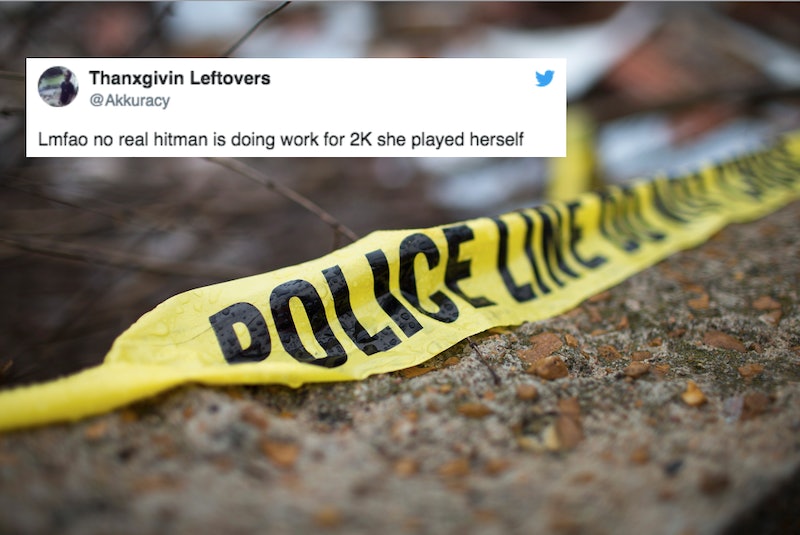 There's really only one solution when you find out your wife has hired a hitman to kill you: Set her up by taping her incriminating conversations, then fake your own death to get maximum evidence. That is exactly what 50-year-old Texas boxing coach Ramon Sosa did when he found out his wife of six years, Maria "Lulu" Sosa, 43, had tried to have him killed for a cool $2000.

OK. Buckle up for this story, folks, because it's a pretty wild ride from here on out.

Basically, Maria wanted to divorce Sosa, but rather than waiting for it to become final, she ordered a hit on her husband, according to ABC 13. Of course, Sosa had a stroke of serious good luck, because when his wife went shopping for a hitman, she ended up approaching a man named Gustavo — who was once a boxing trainee of Sosa's. With just one month left till their divorce would be legally finalized, Maria wanted him to help organize a hit on Sosa, and offered to pay him $2,000 for the job. Instead, Gustavo went straight to his former coach.

"At first, when he called and said he needed to see me, because someone ‘wanted to kill me,’ I thought he was joking," Sosa was quoted as saying in the Daily Mail. But, "Gustavo told me she was clearly serious and had held her fingers to her head, in a gun-firing gesture."

Now that Sosa was a step ahead of Maria, he and Gustavo cooked up a plan: Gustavo would contact Maria and arrange a meeting. At that meeting, he'd act like he was accepting the job, and knew two hitmen who would take care of Sosa. And the whole time, he'd be wearing a wire — to gather more evidence for the police.

Their plan went off without a hitch. "After recording his meeting with her, where Gustavo pretended to know the two hitmen, we took the tape to the police, who were shocked — but came up with a great plan," Sosa explained. "They asked me to pretend to be dead, so we could show the pictures to Lulu."

With concrete proof on hand, the pair approached Houston cops, who involved the FBI and Texas Rangers. To fake Sosa's death, Texas Rangers painted him to look as though he had been shot in the head, then had him pose in a shallow grave. Getting the ultimate proof was nerve-racking for Sosa, though. "Lying in the dirt, pretending to be dead, was terrifying," he reported to the Sun. "When I first met Lulu, I certainly didn’t expect our relationship to end like that."

For those who think staging a murder is a little extreme, "You want to try to take it as far as you can, 'cause you want to show the true intent of this person was to make sure that their spouse or their boyfriend or their business partner was dead," Montgomery County assistant district attorney Kelly Blackburn told ABC.

After Sosa had been "killed," an undercover cop, posing as a hitman Gustavo had hired, met Maria in a parking lot to show her the photos. A hidden camera video showed Maria laughing at the photos, believing the job had been carried out. This ultimately proved to be enough evidence to find Maria guilty of solicitation of murder, and she was sentenced to 20 years in prison in Oct. 2016, as the Houston Chronicle reported. (The story is coming to light once again after a new interview with Sosa was posted by the Daily Mail on Nov. 7.)

The entire tale is almost outlandishly wacky, which is likely why it's resurfaced around the one-year anniversary of Maria's sentencing. And while folks should not need a refresher course on the fact that it's, you know, bad to put out a hit on your significant other (or anyone), if you do need a reminder, here it is.