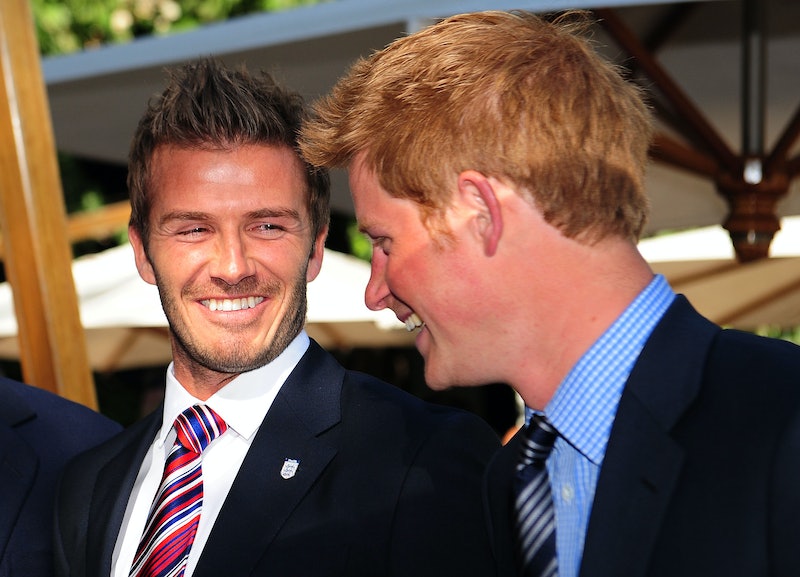 Being friends with the royals is a sign you've really hit the celebrity big time. Although their circle is small, the royals have the creme de la creme of A-list friends. One of Prince Harry, Duke of Sussex's most high profile friendships is with football legend David Beckham. And because we have to know how this unlikely bromance came to be, here's a timeline of Harry and David Beckham's friendship.

It looks like the bromance began back in 2010 at an FA reception that Prince William also attended. William said at the time "When the guys went into the changing room they were fairly upset with how they played, but by the time we finished, we’d laughed and joked. Harry and I behaved like idiots. We tried to get David in on the act as well, and the three of us tried to raise some spirits." Sounds like the beginning of a wonderful friendship.

It looks like things went from strength to strength between the princes and the Beckhams after their first meeting, as in 2011 the couple got the call up for the Prince William and Kate, Duke and Duchess of Cambridge's wedding which was undoubtedly the event of the year. And, as Harry was best man, I imagine there was plenty of catching up at the reception.

December 2011 - Partying At The Arts Club

It's not a true friendship unless you can really let loose around each other. And in December 2011, Prince Harry and Beckham did just that. According to The Telegraph, Prince Harry went to the Arts Club in Mayfair with Beckham, and the two weren't spotted leaving until 3 a.m. Sounds like a pretty good night to me.

The duo were photographed a lot during the 2012 Olympic Games, and Beckham even spoke about the friendship between himself and the princes. He told Esquire "It’s a very normal relationship. With Harry as well. They’re very easy to get along with. They love their sport. William loves Aston Villa, unfortunately, which obviously I give him a bit of stick about."

In 2015, Prince Harry met the youngest of the Beckham clan, Harper at a football match for UNICEF organised by Beckham. Meeting your friends' children is a pretty big deal, and while he had already met the Beckham boys, this was a first for Harper.

December 2017— Meghan and Victoria Beckham reportedly strike up a friendship

In 2017 it was reported by The Sun that Victoria Beckham and Harry's then fiancée Meghan Markle had become friends. Apparently the two bonded over beauty tips as Victoria gave Megan, Duchess of Sussex a list of the best places to go for facials and blow dries in the UK. As well as being beauty fans, they also share a love of fashion, with Meghan wearing designer Victoria's clothes on several occasions, including to the 2018 Christmas Day church service in Windsor.

May 2018 — The Beckhams become neighbours with Harry & Meghan

In 2018, Harry & David's friendship reached new heights, as it was reported by Vanity Fair that Meghan and Harry would be moving very close to the Beckhams' country house in the Cotswolds. A source told the Daily Mail, "they chose it [the Cotswolds] knowing the Beckhams would be next door." I would love to live next door to my best friends — jealous.

The ultimate stamp of Harry & David's friendship was the Beckhams' invite to the Royal Wedding in 2018. You can really tell just how close people are by whether or not they are invited to each others' weddings. For a long time people thought that Rihanna and Prince Harry were close friends until she wasn't invited to their wedding. Ouch. But the Beckhams certainly were in attendance.

Not only was Beckham invited to the Invictus Games in 2018, Harry also asked him to be an ambassador. The Prince founded the Games in 2014 with the aim of using "the power of sport to inspire recovery, support rehabilitation and generate a wider understanding and respect for wounded, injured and sick Servicemen and women." At the time Beckham took to Instagram to announce his new role. He wrote: "I’m incredibly proud to announce I will be an Ambassador for this year’s Invictus Games in Sydney. The entire Invictus Games team, led by the Duke of Sussex, has achieved remarkable things in such a short space of time, using sport as a powerful force to rehabilitate and unite and I can’t wait to be part of the energy and the excellence of the Games this year."

The most recent display of the pair's friendship was of course when Beckham congratulated Harry and Meghan on the birth of their first child Archie. He took to Instagram stories to say, "huge congratulations on a beautiful baby boy @sussexroyal. Those smiles on being a mum & dad for the first time." Victoria also took to social media to post a photo of the family of three with the caption. "Congratulations to the Duke and Duchess of Sussex #PrinceHarry and #MeghanMarkle on their baby boy!"

With a friendship that's been going strong for nearly 10 years, and partners who are reported to be good friends too, it looks like David Beckham and Prince Harry's friendship is here to stay.

More like this
Jennifer Coolidge Slid Into Ariana Grande’s DMs In The Most Iconic Way
By El Hunt
Gemma Atkinson & Gorka Márquez Are Strictly The Sweetest Couple
By El Hunt
Rita Ora Finally Opened Up About Marrying Taika Waititi & Their "Perfect" Wedding
By Sophie McEvoy and Catharina Cheung
Twitter Can’t Get Over This One Part Of Lily Allen & David Harbour’s House
By El Hunt
Get The Very Best Of Bustle/UK
Sign up for Bustle UK's twice-weekly newsletter, featuring the latest must-watch TV, moving personal stories, and expert advice on the hottest viral buys.