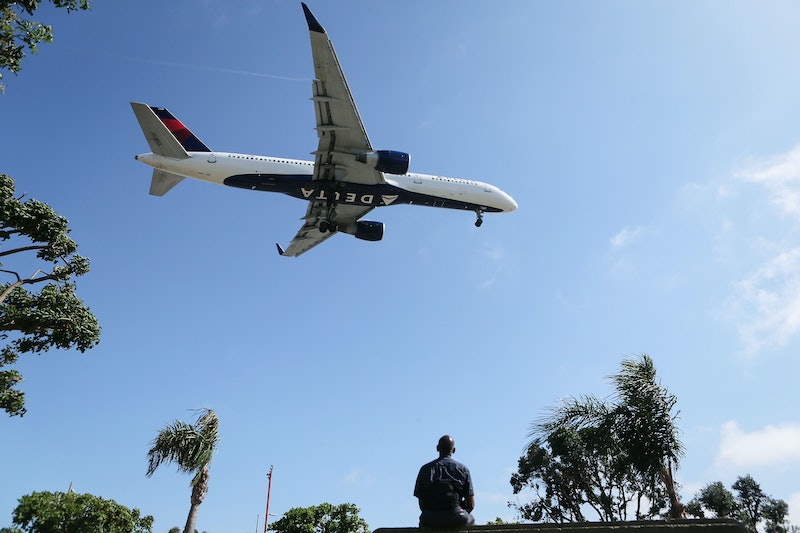 No one actually enjoys going through airport security, but there's one group of people for whom it tends to be especially humiliating and, sometimes, invasive: the transgender and genderqueer community. And just this week, another incident took place that proved why new bills for trans safety on planes are so extremely necessary.

CBC recently reported that gate agents publicly outed Lenore Herrem, a transgender woman who was trying to fly from Calgary to Saskatoon in Canada on WestJet. Herrem told CBC that the gate agent was confused when Herrem's ID card said male and had a picture of her when she had still been presenting as a male. After a colleague of the agent tried unsuccessfully to smooth the situation over, Herrem told the gate agent she was transgender, and that was why the ID looked different. She was allowed to board the plane, but according to CBC, the gate agent then came onboard and demanded to see Herrem's ID again.

"She said something like, 'Oh, that's not the name I remember seeing on the computer when I looked at it,' and she started spouting off different, other women's names that were not mine," Herrem told CBC. "She rolled her eyes at me and said, 'Are you sure it wasn't your girl name that was on the computer?' … She outed me in front of the whole airplane."

"WestJet's inclusive culture is a point of pride for WestJetters and our goal has always been to create a safe and inclusive environment for all," WestJet said in a statement, according to the CBC. "We have extended our apologies to the guest and are reviewing the matter as we are continuously assessing and evolving our practices and policies to maximize inclusiveness and celebrate diversity."

"I felt unsafe, vulnerable, belittled," Herrem said. "I was in shock, it was quite traumatizing having someone, especially the way she did it so loudly and in front of everyone, it was really unprofessional."

This is far from the only way that transgender individuals have a more difficult time while traveling, though. According to the Georgia Voice, there's another issue at airport security, because TSA workers have to mark each person who comes through as male or female to go through a scanner. When someone doesn't quite fit into the gender binary, TSA has to flag them as an "anomaly" and then give them what is often a very intrusive screening.

Democratic Rep. Kathleen Rice of New York, though, has just introduced legislation that would change that system. According to a press release from her office, the Screening with Dignity Act of 2018 would compel the TSA to change their guidelines to be more accepting of — and less openly suspicious of — transgender and non-binary people.

“No one should have to go through airport security scared that they might be humiliated, discriminated against, or outed,” Rep. Rice told the LGBTQ news website Them. “But unfortunately, many transgender and gender-nonconforming individuals worry about this every time they get in line at a TSA checkpoint.”

Rep. Rice actually introduced this bill for the first time in December of 2016, but it didn't make it through either house of Congress. It could still have a difficult time making it to President Donald Trump's desk, but Rep. Rice is dedicated to the cause.

“The transgender community deserves to be treated with fairness and respect in all aspects of life, including travel,” Rep. Rice said, according to the press release. And if you look through the stories that go along with #travelingwhiletrans on Twitter, you'll see why Rep. Rice's work is so necessary.