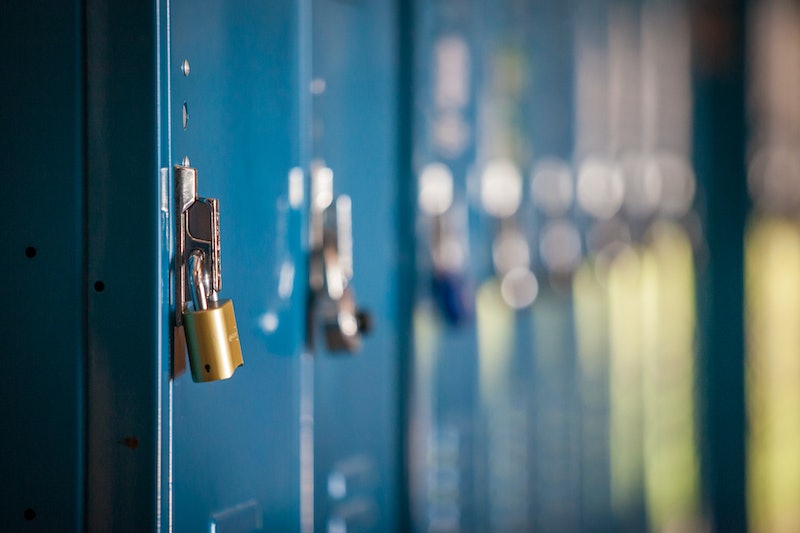 During a recent safety drill, a transgender middle school student was allegedly barred from sheltering in a locker room in a Virginia middle school, according to local news channel WUSA9. On Oct. 3, local LGBTQ rights group Equality Stafford made a public Facebook post about the incident. The post alleges that after the start of the drill, which was designed to prepare students for emergencies like shootings, students in the middle of a physical education class took shelter in the locker rooms nearest to them.

According to the post, a transgender student in the class was stopped from entering the boys’ and girls’ locker rooms while teachers allegedly debated where she should take shelter. While the teachers were allegedly discussing where to place the student, she was allegedly told to sit in the gym bleachers with a teacher until after the drill. She was then moved to the locker room hallway, separated from her peers, according to Equality Stafford's Facebook post. Bustle has reached out to Equality Stafford for comment, and we will update this post when we hear back.

In an official statement about the incident sent to Bustle, Stafford County Public Schools said that it wouldn’t comment on individual student cases for confidentiality purposes. The statement continues: “However, the new superintendent has requested a review of all protocols and procedures including safety to ensure that all children are treated with dignity and respect. We take such matters very seriously and they will be addressed. The welfare of all students is of the utmost importance for SCPS.”

"During an event that prepares children to survive an attack by actual assailants,” the post from Equality Stafford stated, “[the student] was treated as if she was so much of a danger to peers that she was left exposed and vulnerable.”

The post ends with a call for concerned parents to show up to an upcoming Stafford County School Board meeting to voice their thoughts on the incident, though the group was careful to address that the teachers were not to blame, as they were “without guidance in a county without guidance for these issues.”

When asked if the student should have taken shelter in the girls' locker room since she identifies as a girl, SCPS spokeswoman Sherrie Johnson told WUSA that all the schools’ policies, practices and safety procedures are currently under review.

This incident is one in a string of hurdles for transgender students caught in school systems that are often ill-equipped to accommodate them. Last month, the New Jersey Department of Education announced new guidelines for the state’s schools to help provide better environments for transgender students. School faculty were instructed to recognize a student’s gender identity without parental permission, and transgender students are also allowed to dress in a way that matches their gender identity. Notably, the guidelines list that the students must have access to bathrooms and locker rooms that match that gender identity, though some groups, including the New Jersey Family Policy Council, oppose the new guidelines and argue that decisions about who uses which school bathroom should be made at a local level rather than a state level.

The topic of school bathroom and locker room access for transgender students is a heated subject: last year, the Trump administration rescinded protections for transgender students in public schools that allowed them to use restrooms and locker rooms that aligned with their gender identities. Nearly 150,000 American teenagers aged 13 to 17 years old (or one in every 137 teens) would identify as transgender if survey takers asked, according to The New York Times. Students of all gender identities depend on their school systems to protect them in the event of emergency and otherwise.