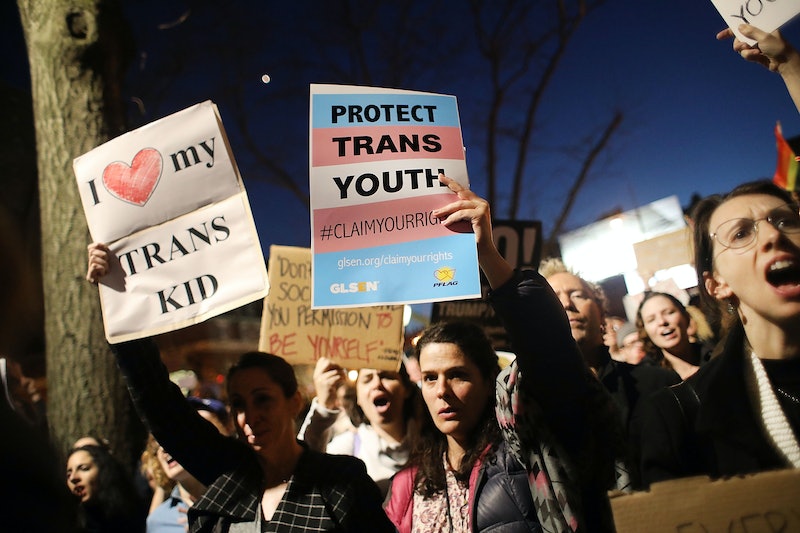 Less than a week after the beginning of the fall semester, Oklahoma's Achille school district was forced to cancel classes in order to guard against potential protests and demonstrations. Stemming from an angry Facebook post, threats against a transgender Oklahoma middle schooler encouraged violence because adults were upset about which bathroom the 12 year-old girl used during the first week of school.

"Achille Schools will be dismissing classes on Monday and Tuesday (August 13th and 14th )," the school district's website reads as of Tuesday afternoon. "Classes Will reconvene on Wednesday (August 15th ). Thank you." Bustle has reached out to the Achille Public Schools for comment.

According to reports, the controversy began when a parent from the school district named district Jamie Crenshaw learned that the middle schooler in question had used the girls' bathroom. The pre-teen has been openly trans for years, her mother told news outlets, but she had historically used the staff bathroom when in school. This was a new building that had recently reopened, however, and she didn't know where the staff bathroom was. When she needed to go, she used the girls' room.

Crenshaw reportedly learned about the bathroom usage and took to an Achille parents Facebook page to express her outrage. Commenters left violent threats in response. Crenshaw's post has since been deleted, though screenshots of it have circulated social media and news reports.

"Heads up parents of 5th thru 7th grade girls," Crenshaw wrote in the Achille ISD Parents Group, according to The Washington Post. "The transgender is already using the girls bathroom. We have been told how the school has gone above and beyond to make sure he has his own restroom yet he is still using the girls. REALLY . . . Looks like it’s gonna be a long year."

Crenshaw said that there were "school board meetings over this situation last year but nothing seems to be changing."

"This is the same kid that got an [sic] trouble as soon as he transferred two years ago for looking over the stalls in the girls bathroom," she reportedly wrote. "Enough is enough."

Commenters on the post reportedly to the girl as a "thing," The Washington Post reported, and some encouraged violence.

"If he wants to be a female, make him a female," one commenter wrote, according to NewsOk. "A good sharp knife will do the job really quick.”

"Just tell the kids to kick ass in the bathroom and it won’t want to come back," another commenter reportedly wrote.

Achille superintendent Rick Beene told news outlets that the comments were left by parents from other parts of the state, as well as Texas. Only the original post was penned by an actual Achille parent, he said, according to the Post. Still, he said, he chose to temporarily close school per recommendation of law enforcement.

"The thought was, for law enforcement, that you can have an opposing group that might be here and that could lead to problems,” Beene said. "When you get into a small town, you don’t have to get a permit to demonstrate, therefore the problem with that is you don’t know who’s showing up, you don’t know what time they’re going to show up or anything like that."

There's no word on whether the school will take extra precautions to protect its LGBTQ students when doors reopen. School is expected to be back in session Wednesday morning.