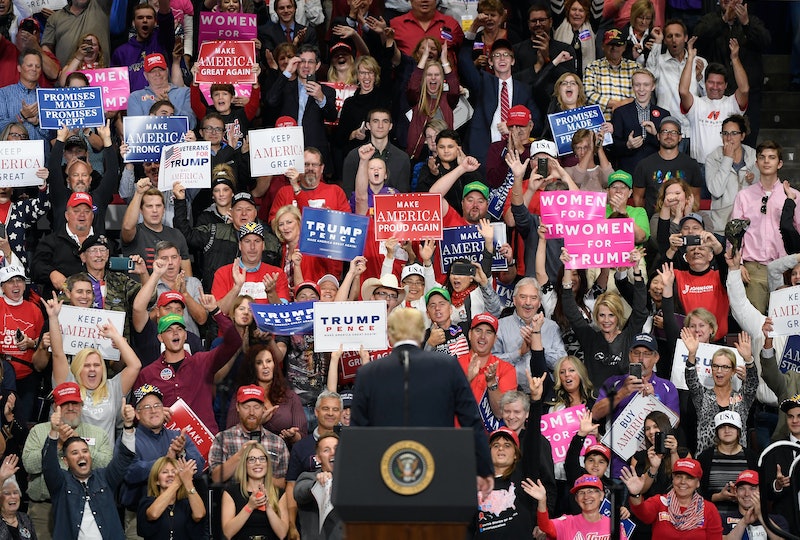 Standing on the White House lawn earlier this month, the president claimed it's "a very scary time for young men in America." A recent survey would suggest his base agrees. A poll released by The Economist/YouGov reports almost half of Trump voters polled think men face more discrimination than women, LGBTQ+ people, African-Americans, Mexican-Americans, and immigrants in general.

The poll surveyed 1,500 Americans from across the country a range of questions between Oct. 14 and 16. The data is broken down into percentages of voters that feel a certain demographic faces "a great deal," "a fair amount," "not much," or no discrimination. Eighteen percent of Trump voters think men face "a great deal" of discrimination and 31 percent believe they face "a fair amount." Combined, that's 49 percent, or nearly half of all Trump voters that feel men are more than a little discriminated against (if you were curious, 34 percent said men face "not much" discrimination, and another 18 percent said "none at all").

On the flip side, however, there are a few groups that Trump voters acknowledge as being more discriminated against than men. Fifty-three percent of the group said Arab Americans face discrimination, and 63 percent said "people with [my] religious beliefs" are discriminated against. It's worth noting here, however, that a majority of Trump voters are at least somewhat religious, and most of those who report attending church weekly or more often identify as Christian. A Public Religion Research Institute poll conducted in August and September reported that 71 percent of white evangelical Christians continue to support Trump's presidency.

This is certainly not the first time that polling has suggested this type of controversial opinion among Trump voters. In August, The Washington Post reported that the concern for "reverse racism" — discrimination against white people — is a common sentiment among Trump voters.

The 2016 election results also mirror the Economist/YouGov poll somewhat. Trump won 52 percent of men, a full 11 points ahead of Hillary Clinton, and twice as many white men voted for him as did for Clinton.

The subtext of the "male discrimination" question is especially striking following the Kavanaugh hearings. The hearings represent a particularly fraught segment of the #MeToo era in which prominent Republican men were criticized for showing more concern for damage to Kavanaugh's reputation as a result of Dr. Christine Blasey Ford's allegations, rather than the allegations themselves.

"I thought [Ford] was handled respectfully. I thought Kavanaugh was treated like crap," Sen. Lindsey Graham said at The Atlantic Festival this month. When the audience booed in response, he replied, "Yeah, well, boo yourself."

The perceived victimization of men — and particularly white men — is also an increasingly common theme in the Trump presidency. "I’ve got boys and I’ve got girls, and when I see what’s going on right now, it’s scary," Donald Trump Jr. said in an interview in late September. Asked whether he felt more concern for his sons or his daughters, Trump Jr. said, "Right now, I’d say my sons."