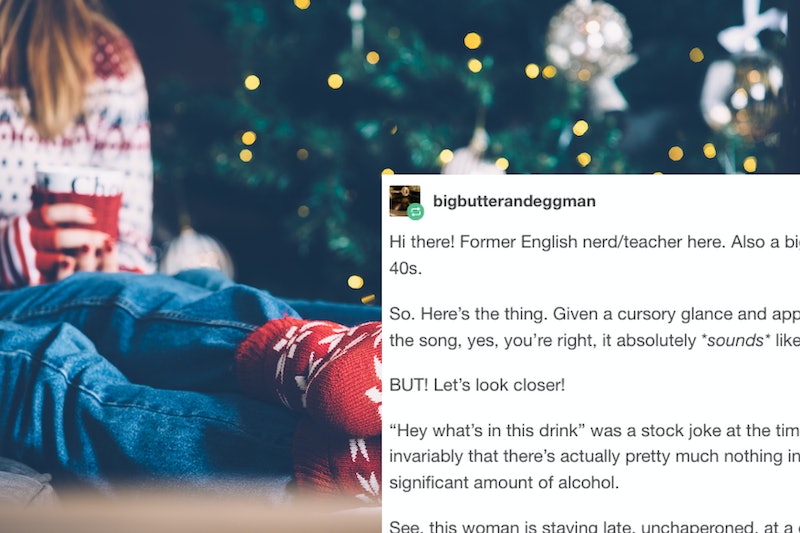 Forget Christmas lights and fruitcake. The holiday season doesn't truly start until everyone starts to point out that "Baby, It's Cold Outside" is, er, problematic. Ragging on the Christmas classic is practically a seasonal tradition, but if you secretly love it anyway, this feminist defense of "Baby, It's Cold Outside" will give you an excuse to put the song back on your holiday party playlist. Even if you're one of its many critics, the post is worth a read. It might just change your mind — or maybe it will end up strengthening your argument against the song. You won't know until you read on.

For the uninitiated, "Baby, It's Cold Outside" is a call-and-response duet, traditionally sung by a man and a woman, written by Frank Loesser in 1944. On first listen, it's a jaunty little holiday tune you would never imagine to be at the center of a culture clash. Pull up a lyrics sheet, though, and the reason for the controversy becomes much clearer. The song takes place at the end of a date, when the (traditionally) female singer is trying to head home as the male singer pleads with her to stay. After all, as he points out repeatedly ,"it's cold outside."

Some listeners find certain lyrics — particularly "I really can't stay" and "Hey, what's in this drink?" while the male singer barrels over her protestations — to paint a problematic picture of consent. Maybe they were unremarkable in the '40s, but in the modern day, they're a tad more sinister.

But you probably know all this already. Each year, before the Thanksgiving turkey has been put in the refrigerator, people start sharing critiques of the song online. Funny or Die even did an "honest performance" a few years ago that ended in Carey Wilson hitting Scott Aukerman over the head with a poker before fleeing the premises.

This year, though, "Baby, It's Cold Outside" supporters may have their own post to share. In a 2016 Tumblr post, a self-described "former English nerd/teacher" and "big fan of jazz" points out that the song is way less creepy when you consider the historical context.

First up is the most disturbing line: "What's in this drink?" By modern standards, it's a pretty clear reference to date rape, but the author of the post writes that it was a standard joke when the song was created. "The punchline was invariably that there’s actually pretty much nothing in the drink, not even a significant amount of alcohol," they write.

This led to the post's major argument, that the woman feels like she has to protest staying the night. It's not that she wants the date to end; it's that she's worried about what the rumor mill will have to say if she does.

"The woman in the song says outright, multiple times, that what other people will think of her staying is what she’s really concerned about. ... But she’s having a really good time, and she wants to stay, and so she is excusing her uncharacteristically bold behavior (either to the guy or to herself) by blaming it on the drink — unaware that the drink is actually really weak, maybe not even alcoholic at all. That's the joke."

The post suggests the lyrics actually give the woman agency, allowing her to "use the drink for plausible deniability" if anyone questions her decision to sleep with her date — which they very well might. Back in the '40s, the Tumblr user claims, this song-and-dance was expected. Even if they were interested, women were supposed to put up at least a token protest against male advances, and men were supposed to offer excuses for them to stay if they wanted.

"At the end of the song they’re singing together, in harmony, because they’re both on the same page and they have been all along," reads the post. Rather than being about rape, the user argues that it's about a woman "finding a way to exercise sexual agency in a patriarchal society designed to stop her from doing so."

Of course, all this still pushes the boundaries of consent, and the post acknowledges these flaws. While the author believes that "Baby, It's Cold Outside" gives women agency, they admit that it is a product of rape culture. "It’s a song about a society where women aren’t allowed to say yes…which happens to mean it’s also a society where women don’t have a clear and unambiguous way to say no," they conclude.

If you're still on the fence about the holiday classic, you can read the post in its entirety on Tumblr... then watch the aforementioned Funny or Die skit to remind yourself of what a literal interpretation of the song looks like.

Or you can just stop stressing about the soundtrack to your holiday season and drink some hot chocolate.

More like this
25 Inspiring Quotes From Black Women To Celebrate Black History Month
By Kyli Rodriguez-Cayro and JR Thorpe
Pret & Costa’s Coffee Is The Strongest On The High Street, According To Which?
By Sam Ramsden
Ashamed Of Your Screen Time Stats? Here's How To Change That
By Alexis Morillo
Learning To Love, Not Judge, The Lunchbox Wives Of TikTok
By Esther Zuckerman
Get Even More From Bustle — Sign Up For The Newsletter
From hair trends to relationship advice, our daily newsletter has everything you need to sound like a person who’s on TikTok, even if you aren’t.