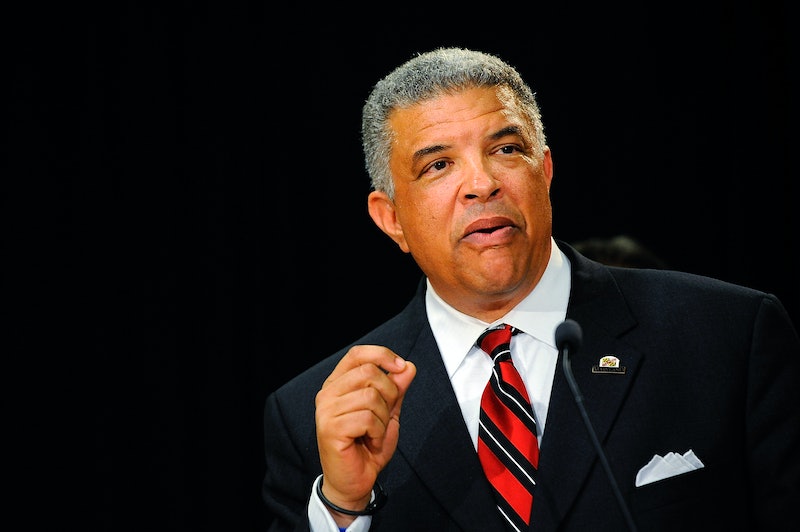 At the University of Maryland, new details are emerging about a sexual assault case from last year that could indicate mishandling by a staff member. UMD Athletic Director Kevin Anderson used the school's money to hire a lawyer for the accused, the university said on Thursday in a statement, a decision that it considers to involve "a serious lack of judgment."

Beginning in June 2017, UMD investigated two student football players who were accused of sexual misconduct, according to The Washington Post. While the school would not release the outcome of the investigation, three sources told The Post that one student was cleared of wrongdoing and left the school, while the other was expelled.

Few details about the case are known, but the athletic department's handling of it has come into the public eye this week. A source told The Post that the department sometimes inhibited the investigation by being "unresponsive to requests, insisting on submitting irrelevant evidence, [and] putting forth football teammates as witnesses." Of particular concern are the actions of Anderson, the former athletic director who resigned in April after a six-month sabbatical. It followed reports that he'd been fired, which the university quickly denied.

Anderson used funds from boosters, not public money, according to The Washington Post. A UMD spokesperson on Thursday said that NCAA schools are allowed "to pay for legal counsel for proceedings that might affect a student-athlete's eligibility to participate in intercollegiate athletics."

But UMD also says that his actions constituted "a serious lack of judgment in a sexual misconduct case, given the university's commitment to a fair and impartial handling of all such matters." According to the school, Anderson was told to stop employing the lawyer and declined to do so.

According to NCAA rules, adopted in 2014, member schools are not supposed to "manage, direct, control or interfere with college or university investigations into allegations of sexual violence."

UMD insists that, despite Anderson's interference, the case was ultimately handled "independently, impartially, and without favoritism." UMD's student newspaper The Diamondback published a seven-part series on the university's treatment of sexual assault cases in the spring of 2017. Per The Diamondback, student complaints are investigated by the Office of Civil Rights and Sexual Misconduct and reviewed by a small committee of students and staff members. UMD uses a preponderance of the evidence standard, meaning that the accused can be found guilty if it is "more likely than not" that they committed a violation.

Catherine Carroll, then head of UMD's Office of Civil Rights and Sexual Misconduct, told The Diamondback in January that the school considers hiring a lawyer for just one side in a sexual misconduct case to be an equity violation.

"The university never is paying for any of that [legal representation]," she told the paper. "We do provide referrals to both parties."