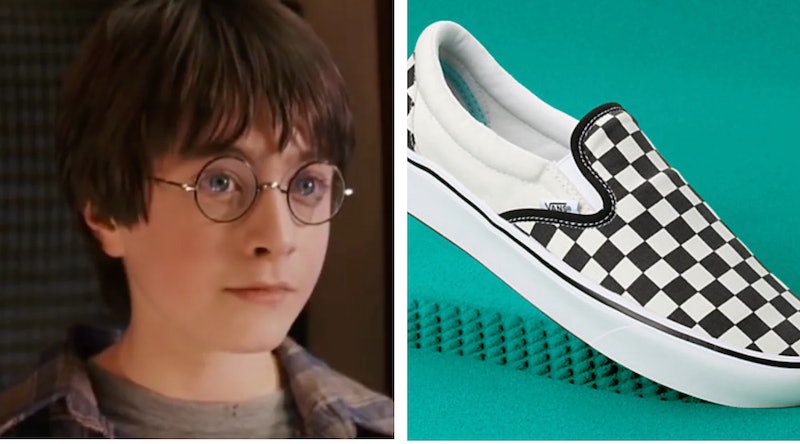 Vans is known for its epic collaborations with other pop culture dynamos, such as Disney, Star Wars, David Bowie, Marvel, Hello Kitty, and beyond. But the beloved lifestyle and sneaker brand is taking things to the witches and wizards with its latest partnership. A Vans x Harry Potter collaboration is actually happening and it might leave you wondering why such a magical mash up hasn't happened much sooner. Regardless, it's never, ever too late to infuse your wardrobe with some Harry Potter-themed pieces and to display your fandom on your feet.

Vans confirmed the Harry Potter collection on social media but there are no further or concrete details about the actual items, the release date, or the prices. The Instagram and Twitter posts revealing the news featured a spinning graphic with the colors of each of the Hogwarts houses. The caption of the social posts simply read as follows: "Something magical coming soon," along with a link. When you click the link, it takes you to a landing page where you can sign up for alerts about this much-anticipated and highly coveted range. The message read as follows: "Vans and Harry Potter collaborated to conjure up a magical collection of footwear, apparel, and accessories for witches, wizards, and muggles alike."

So, it will be an expansive range that includes shoes and beyond. It's also safe to assume that the collection will feature the colors and crests of the houses. There was a Hogwarts combat boots collection a few years back that did the same.

Bustle reached out to Vans PR for further information about this collection.

While details remain somewhat scarce, that didn't stop Vans devotees and the Harry Potter faithful from chattering online about what to expect. Fans are clamoring for more. Many have already pledged to purchase, sight unseen. Ultimately, the tease was well played by Vans because the digital buzz has reached a deafening roar.

Whoever is running the Vans Twitter account surely had a grand ol’ time responding to the fans who were inquiring about this collection. Here are some of the best responses to the news.

Vans was being quite coy and "on brand" regarding the details. It only served to further stoke the fires of excitement.

The Vans x Harry Potter news was tailor-made for memes.

This simple tweet encapsulated what so many fans are feeling. It was only a matter of time before these two titans of fashion and pop culture collided like this. Fans cannot wait to slip into what they think and hope will be Ravenclaw, Hufflepuff, Slytherin, and Gryffindor-themed Vans.

It's best to sign up for the email alert now and keep your eyes fixed to the Vans social media feeds so you don't miss the drop or any of the associated details leading up to it. While the film franchise has long since wrapped, the passion and nostalgia fans feel for it will never die. One can never have enough socks and one can never have enough Harry Potter Vans.