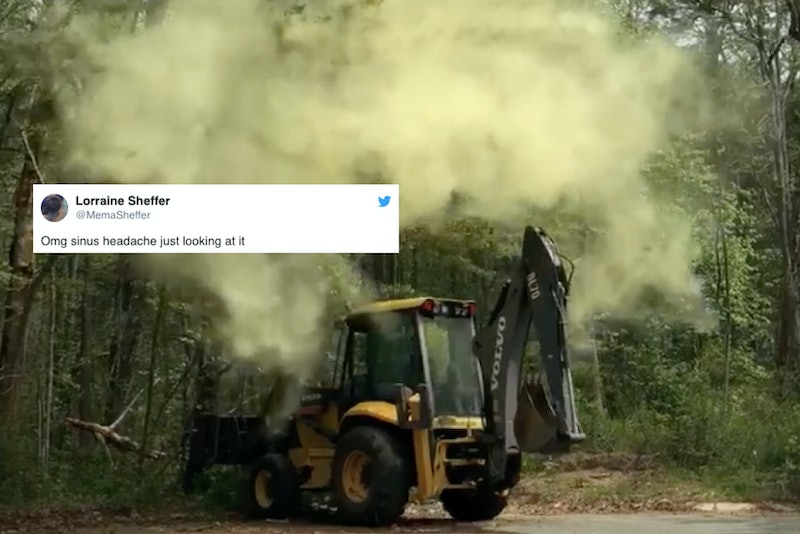 Jennifer Henderson/Facebook
By Ayana Lage
May 10, 2018

Spring is easily my favorite season, but I've been having a hard time loving it this year. Every time I check the weather, there's a warning about high pollen levels in my area — which is bad news for seasonal allergy sufferers. I don't even deal with seasonal allergies, but a viral video of pollen exploding from a tree is making me itchy — and I'm not the only one. The video had garnered about five million views on Facebook by Thursday morning, and once you watch the 20-second clip, you'll understand why it's spread so quickly: It's the stuff of nightmares.

A New Jersey woman, Jennifer Henderson, shared the video with the caption, "When my husband said the pollen’s bad, I probably should’ve taken his word for it. Crazy!" The video shows someone — presumably her husband — poking at trees with heavy machinery until a pollen cloud puffs into being. As horrifying as it looks, I can't stop replaying it. I half-expected the pollen cloud to spell out a secret message because it seriously looks otherworldly. My husband doesn't get freaked out by scary movies, but he has seasonal allergies — and his reaction to this video was pretty much me after seeing a horror flick.

To truly understand the horror we're seeing in the above video, it's important to know why pollen makes us all so miserable. Plants release pollen year-round, and it's what allows plants to reproduce. One Science article calls pollen plant sperm, which is easily the best thing I've ever heard. But if you're one of the 50 million Americans with seasonal allergies, your body will treat pollen like an invader, and you'll have itchy eyes, a runny nose and near-constant sneezing as a result. WebMD says over-the-counter medications and prescription antihistamines can help alleviate symptoms, but if you're unexpectedly hit with a lot of pollen in the air and haven't taken medication, you'll have an unpleasant time.

So back to this nightmare pollen cloud. According to the Asthma and Allergy Foundation of America, tree pollen is finer than other types of pollen, which means it can be carried for miles. I'm not gonna lie — if I lived next door to the pollen cloud folks, I would be pretty annoyed. But not every tree has pollen that's likely to irritate your lungs and throat, which means that this pollen could've caused less of an itch-fest than we're all assuming. Still, the reactions to the video on Twitter were the same as mine: I wanted to look away but couldn't.

The bad news is that allergy season is nowhere near over. Right now, tree pollen is the biggest culprit for triggering allergies, but summer will bring grass pollen and fall is when weed pollen gets bad. Allergy season will be here for several months, so it's just a matter of coping with it. New York City-based allergist and Flonase spokesperson Dr. Tania Elliott, MD, says that one way to beat allergies is to avoid bringing pollen into your home. That means leaving your shoes outside and showering right when you get home — and if you have pets, be aware that there's a chance they're covered in pollen after being outside.

The other option is to stay inside until allergy season ends. It's probably not the most realistic choice, but after watching that video, I'm wondering whether leaving the house is ever worth it. If you venture outside in a high-pollen area and have allergies, you could decide to stay far away from trees. They do a lot from the environment, but the horrific pollen cloud is a reminder that nature can be pretty scary.