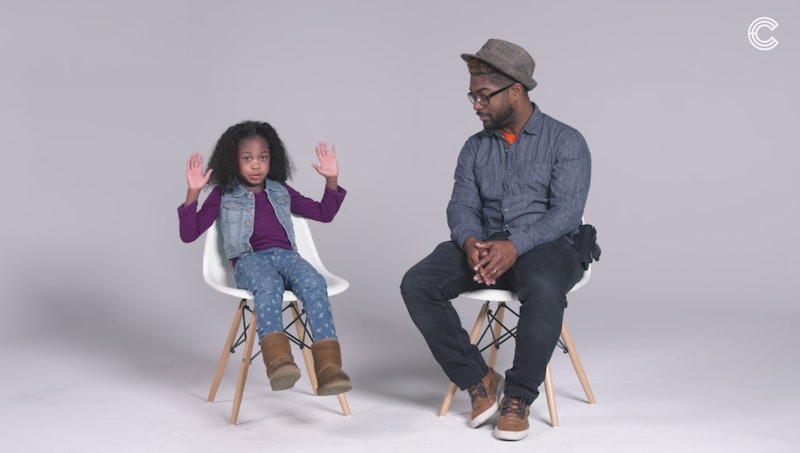 This one is really hard to watch. A video of Black parents talking to their children about how to handle police violence has come under renewed attention since it was originally shared in February, and it's nothing short of heartbreaking. The video from Cut was originally posted on YouTube nine months ago, but has gone viral online over the past month since being reshared on Oct. 15.

In the video, four parents talk to their children about what to say and do if they are stopped by police, and they recount their own terrifying experiences with law enforcement. It's difficult not to tear up while watching Arielle, a little girl featured in the interview, begin to sob as her father explains to her he's been tasered by the police. In another moment, a teenager in the video begins to cry out of fear for her cousin's life, saying, "I'm worried about Donovan... I don't want him to die. I don't want him to go to jail."

Lex Scott, the founder of the civil rights organization United Front Party, and Utah’s Black Lives Matter chapter, tells Bustle, “It is deeply disturbing that people of color must have these talks with our children. We should not have to behave any differently than anyone else. People need to realize that the police are supposed to protect and serve everyone in the community.” Though the video is heartbreaking, Scott reiterates it is sadly commonplace for people of color in America to have conversations with their children, even young children, about how to deal with law enforcement.

Even among white people who understand that racism in law enforcement exists, many do not comprehend how early systemic discrimination begins. In fact, negative encounters with the police can start as early as elementary school. Black children as young as six years old (yes, six) have been handcuffed and taken to the police department for behavior that would never be criminalized for white children — in that example, the six-year-old was "throwing a tantrum." Unfortunately, this creates the need for parents to have a dialogue with their children about how to manage an encounter with the police starting at a very young age.

Additionally, though longstanding research has confirmed that racial bias in law enforcement is very real and poses disproportionate danger to Black Americans, white people still do not fully grasp the reality of racism in the United States. A three-year poll, released by the Public Religion Research Institute in Feb. 2017, shows that 87 percent of Black Americans believe people of color face a lot of racial discrimination in the United States, while only 49 percent of white Americans believe racism is a serious issue.

So, how do white people begin to fully understand racism? The key may actually lie in videos and conversations, like the one Cut produced, that invoke empathy. A 2013 study conducted at the University of Milano-Bicocca proved there is a racial empathy gap, which simply means white people do not adequately process physical or emotional pain in Black people like they do in other white people. Moreover, a 2016 study found one of the best ways to reduce racial bias is through having empathetic conversations.

“We have seen that police profile Black people, pull us over more [in routine traffic stops], and we see video after video of the brutalization of Black people by police,” says Scott, “but we will continue working towards change.” The video is yet another reminder of the reality of racism in our country, and gives white Americans more perspective on the fear or pain people of color face daily in the United States — even when dealing with the people who are supposed to protect them.

More like this
10 Thanksgiving Alternatives You Can Celebrate This Month
By Katie Mitchell
Iran Has Issued A Death Sentence Over Mahsa Amini Protests
By Catharina Cheung, Darshita Goyal and Maxine Harrison
Amanda Gorman Shared A Powerful Message On Meghan Markle’s Penultimate Podcast
By Darshita Goyal
Wimbledon Alters All-White Kit Rule Amid Candid Period Discussions
By Catharina Cheung and Rachel Mantock
Get Even More From Bustle — Sign Up For The Newsletter