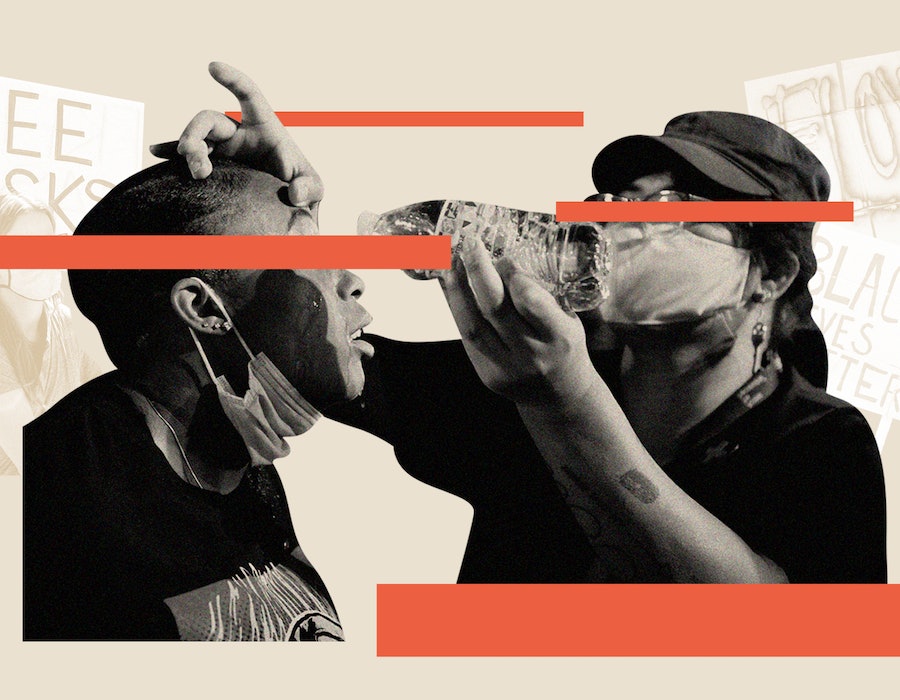 On May 25, George Floyd died after a police officer, Derek Chauvin, pressed his knee into Floyd's neck for 8 minutes and 46 seconds. On May 26 and through the week, protesters, angry about Floyd's death and other acts of police brutality, took to the streets in Minneapolis, Brooklyn, Washington D.C., Atlanta, Louisville, and other cities across the nation, all against the backdrop of a pandemic.

The fact that people are risking exposure to COVID-19 speaks to the level of hopelessness and anger that centuries of oppression have caused. But both the virus and police violence pose serious health risks to protestors. Volunteer medics emerged on the frontlines of these protests to help manage these risks, despite being targets of police violence themselves.

Bustle spoke to Sarah, a Lebanese human rights technologist who volunteered to care for protestors at the demonstration in Brooklyn, New York.

I figured that being a medic would be the best use of my skills right now. I’m certified in Hostile Environment and First Aid Training (HEFAT), and I participated in the October Revolution in Beirut, so I have experience with these kinds of protests. I even helped write a guide for Americans based on those protests in Beirut, including first aid tips.

As medics, we're not licensed medical officials like doctors or nurses. We are there as volunteers, giving first aid to folks who were pepper-sprayed, maced, or teargassed. We didn’t have licensed doctors in our group at the Brooklyn protest, so we used first aid as much as possible, and then got folks to an actual hospital, as the HEFAT trainings instruct.

Obviously, it's stressful in a lot of ways. We’re doing first aid on folks on the ground who got maced, with burning skin and eyes. And there's the threat of COVID-19, with so many of us side by side. If people can keep protesting with masks, that's already helpful in lowering the risks of COVID-19. Carrying extra masks around with them is great, too. But we're never going to eliminate the risk of getting sick. It’s a question of minimizing risk as much as possible. We've set up mutual aid funds for donations to buy medical supplies like bandages or masks because there's definitely going to be more protests happening in the next week.

My friends and I were marked very clearly as medics. We all had backpacks and white hats with a red cross on it. We were carrying supplies, a lot of saline, water, milk to help people who were pepper-sprayed, and bandages. Despite being labeled as medics, we were still targeted by police specifically, just like some journalists have been. On Friday, other medics were on their knees helping other people who had been beaten by police officers. One of them turned around to the cops and was like, "Well, what are you going to do? Kill me?" And the police officer was like "Yeah, I would like to." He then turned to my group and said he was going to make us choke on the milk we were carrying to help people. Then he asked for information on other medics and protestors.

One of the medics in my group got tackled by a police officer and arrested. They weren’t provided with any masks while in detention, where there were around 20 people in a cell. He told us later that he specifically asked for a mask again and again, and the police officer said no. (Bustle reached out to the New York Police Department for comment, and we will update this article when we receive a response.)

As a medic, I take a break from the news and social media when I can for self-care. I take a walk in nature or put down the phone, especially in the evening so I don’t go to bed full of adrenaline. But in the past few nights, I’ve only had a few hours of sleep because tensions and emotions were so high.

Having networks of support definitely helps with self-care. There's so much solidarity with Black people everywhere. No one has to go through this alone. Being able to talk about what you're experiencing is so important. And that can be virtually, not physically, because of COVID-19. But that community is important.

More like this
6 Organizations Fighting Police Brutality That You Can Support Right Now
By Syeda Khaula Saad and JR Thorpe
These Artists Are Reimagining Black History Month To Create A Better Future
By Katie Mitchell
25 Inspiring Quotes From Black Women To Celebrate Black History Month
By Kyli Rodriguez-Cayro and JR Thorpe
10 Primal Movement Exercises That'll Improve Your Mobility
By Carolyn Steber
Get Even More From Bustle — Sign Up For The Newsletter
From hair trends to relationship advice, our daily newsletter has everything you need to sound like a person who’s on TikTok, even if you aren’t.