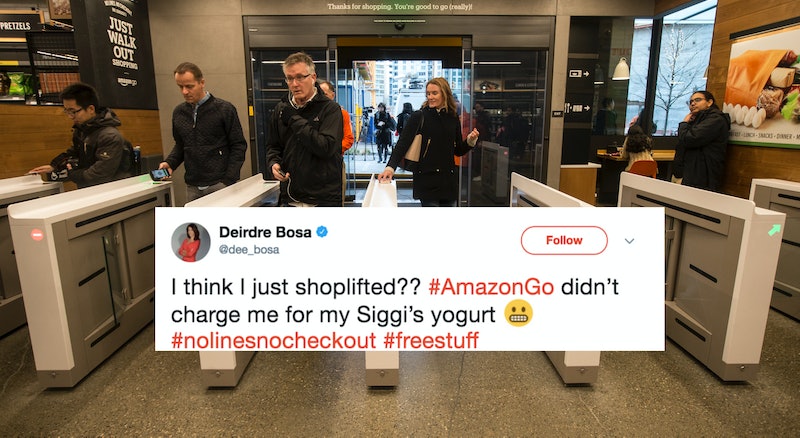 We anxiously waited with bated breath for the opening of Amazon Go — the marketplace titan's new store that allows customers to walk in, take what they want, and leave — no waiting in lines, no cashiers, nada. Obvi, we've all had the same huge question on our minds: how do you get charged, if no one's ringing you up? Still, many of us had faith in Amazon, because it's Amazon. Well, we there might be a few bugs to work out before versions of this store open nationwide, because on the day of its grand opening, a reporter was able to shoplift at Amazon Go without anyone having a clue — unintentionally, of course.

As reported by The Daily Dot, CNBC reporter Deirdre Bosa was minding her own business, picking up some Siggi's yogurt at the sparkling new Amazon Go in downtown Seattle. The concept of the new store is simple: when you enter the store, you tap in with your phone so the Amazon Go app knows you're shopping. When you leave, your receipt for everything you bought is supposed to appear on your phone within minutes, using sensors from the products themselves. Such was not the case with Bosa, who realized she hadn't been charged for her yogurt, making her a full-blown criminal. (Not really.)

She was indeed charged for her other purchases, but not her single-serving cup of Siggi's. It was confirmation that even with a year of testing, Amazon Go bugged on the first day of business. I think a lot of us assume Amazon will always work perfectly, since, well, it typically does. But no technology will ever be 100 percent without fail. And that's OK, because look! You might get free yogurt out of it. Plus, Amazon is pretty dope about 99.9 percent of the time.

So, what happened to Bosa? Did Amazon Go summon the Amazon police to arrest her and throw her behind bars with other people who steal fancy dairy products? Nope. Amazon was actually very chill about it. You probably would be too, if you were netting more than $40 billion a quarter. According to The Daily Dot, Vice President of Amazon Go Gianna Puerini told Bosa, "First and foremost, enjoy the yogurt on us." She then explained this type of scenario is so rare, they didn't even plan for a way to allow customers to report it. In fact, Puerini has been shopping at the store for a year with no issues. (Did she try purchasing Siggi's yogurt? Just asking...)

Speaking of Siggi's, they didn't seem too bothered by it either.

Bosa may have scored a tasty complimentary snack, but if you're planning a trip to Amazon Go in hopes of nabbing free treats, you might want to reconsider. It seems as though her experience really was a rare happening. Nick Wingfield of the New York Times intentionally tried to shoplift by wrapping a shopping bag around a four-pack of soda while it was on the shelf, tucking it under his arm, and leaving. He was still charged for it. But wait a minute — why not just walk in and steal stuff, without using your phone at all? Well, gates guard the front of the store, kind of like a subway; and you can't get in without letting them scan your app.

Amazon remains tight-lipped about how it all works. They did reveal that as soon as you take an item off the shelf, it's put into the shopping cart of your online account. If you put the item back, it's removed from your cart, according to the New York Times. Hundreds of tiny cameras are perched above the store shelves, they can see everything, and Amazon is utilizing machine learning software in the background.

It sounds a little eerie — a cashier-less store? But don't worry. There are still employees around.

While nobody is there to ring you up, there are still employees restocking shelves, helping customers with their needs, and checking IDs in the alcohol section. (Sorry, kids.) There's even a kitchen next door where chefs prepare the ready-to-go meals. So, it's not totally employee-free, which is good — because if you need help, you're not on your own. At the same time, no long lines. Hooray!

Amazon has not yet released what its full plans are for the new store. Will they open other locations? Will they sell the software to other stores? Fingers crossed for the rest of the country. In the meantime, if you're in the Seattle area, be sure to come ready with your grocery list in hand.

More like this
Why TikTok Is Flooded With Controversial Videos About "Pick Me Girls"
By Courtney Young
Why Everyone Is "Soft Tagging" Friends On Instagram Right Now
By Alexis Morillo
On TikTok, Tinned Fish Date Night Is The Latest Viral Food Obsession
By Emma Carey
20 Smart Devices Under $35 That’ll Change The Entire Vibe Of Your Home
By Emma Carey
Get Even More From Bustle — Sign Up For The Newsletter