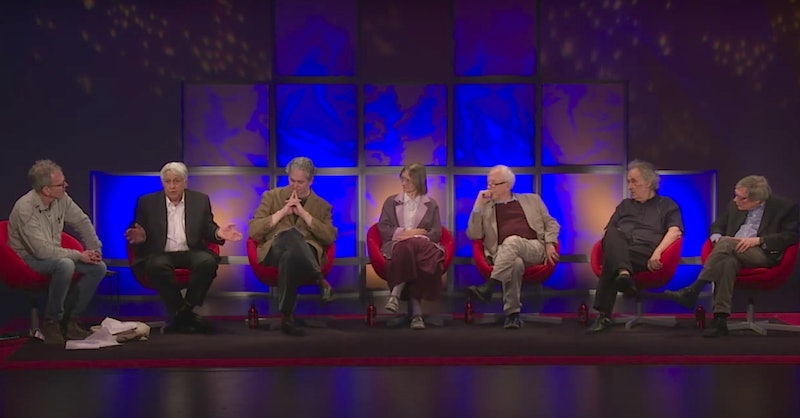 At the World Science Festival in early June, theoretical physicist Veronika Hubeny joined a panel on cosmology with five other physicists. In a cringe inducing exchange, the panel moderator interrupted the physicist to explain physics to her — and, in particular, her own field of expertise. Repeatedly. Oof. Whether you call it “mansplaining” or just “being rude,” the audience was not having it, and one woman in the crowd called out the moderator, demanding, “Let her speak, please!” Her intervention has been met with applause — both from the audience and from thousands of people online.

In a June 4 Facebook post, actor Marilee Talkington recounted her experience at a panel titled, “Pondering the Imponderables: The Biggest Questions of Cosmology.” Hubeny, a professor at UC Davis specializing in string theory and quantum gravity, was the lone woman on the panel of six, which was moderated by philosopher and author Jim Holt.

In her post, Talkington said that the male panelists dominated the discussion for the first hour, after which Holt turned the conversation to Hubeny’s areas of expertise. In video of the panel, you can see the conversation shift to Hubeny around the 1:02 mark. Holt says to Hubeny, “Tell us about the two theories,” referring to her work in string theory. He then proceeds to explain the theories himself, even speaking directly over Hubeny when she attempts to answer his questions.

“So at this point, after seeing very clearly that she was not going to be given space to speak and in fact having her own theories described to the audience by the moderator, I am in full outrage,” Talkington wrote of that moment. “… The sexism is beyond blatant. It is happening onstage and NO ONE, not a single other physicist or panelist is stepping in to say anything about it.” She said that she wasn’t the only one who noticed the problem. “I can hear other audience members around me, both men and women becoming more and more agitated with what is happening,” she recalled.

Talkington wrote, “I finally say from my seat in the 2nd row of the audience, as clearly, directly and loudly as possible; ‘Let. Her. Speak. Please!’” The audience erupted into cheers. You can watch the moment in the video above at around the 1:05 minute mark.

Talkington said that after the panel finished, men and women from the audience came forward to support her. “The first woman, right behind me, reaches over and embraces me and says, ‘Oh my god. what you said was the most important thing that was said all day. Thank you. Thank you,’” she wrote. She added, “WHY IS THIS SEXISM STILL HAPPENING? WHY, does someone like me, with No status in that room, have to be so extraordinarily bold and speak up? And why was it so frightening to do so?”

In a Facebook comment, Hubeny praised Talkington’s action. “I applaud your heroism in standing up for what you believe in!” she wrote. “I know well the shaky feeling and subsequent exhilarated and heartwarmed contentment in the knowledge of having done the right thing, and I think that doing so has become more crucial than ever.”

Hubeny added, however, that in the moment she did not interpret the incident as sexist. “[D]uring this panel session I genuinely did not feel affronted or discriminated by the moderator’s behavior,” she wrote. “It seemed more amusing to see him try posing a question in a way that at the same time tried answering it.” Hubeny added, “Maybe I’m too naive, but I simply gave him the benefit of doubt that he was so excited by the newly-learned idea of the duality that he couldn’t resist, and that the same might have occurred had the panelist been a male instead of me.”

Hubeny also said that Holt had “contritely and humbly” apologized to her. “[H]is explanation was perfectly consistent my earlier interpretation: there was no intended sexism here,” she wrote. Holt also apologized in a statement to Mic, saying, “The reproach from the audience was well-merited. I apologize to Dr. Hubeny and salute her for her stellar contribution to the discussion.”

One could debate ad nauseam whether Holt’s interruptions were based in overt sexism, unconscious bias, or simple enthusiasm, and it’s fair to give him the benefit of the doubt, as Hubeny clearly has. Whatever the root of the incident may have been, Talkington’s interjection and subsequent Facebook post brings necessary attention to a widespread cultural dynamic in which men consistently take up more verbal “space” than women. Study after study has shown that women are more interrupted than men (by both men and women) and that men speak significantly more than women in professional meetings and classrooms. Men also get more printed space in journalism, and more retweets on social media than their female counterparts. This privileging of male voices is based in longstanding cultural biases that are often unconscious, and it occurs even when people have the best of intentions. These deeply ingrained habits will only change if people consciously try to change them — and “Let. Her. Speak. Please!” isn’t a bad place to start.