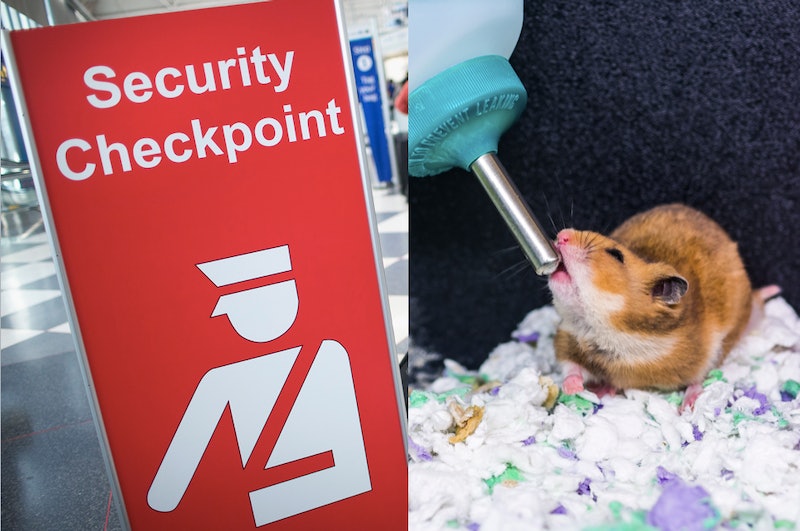 A Florida woman has made headlines this week after claiming she had to flush her emotional support hamster down a toilet at Baltimore-Washington International Airport in November, after being misinformed about being able to take the animal on the plane with her, the Miami Herald reported. The woman, Belen Aldecosea, claims that a Spirit Airlines representative suggested she flush her pet dwarf hamster, Pebbles down a toilet, after informing her that the animal could not accompany her on the flight, and Aldecosea did not have any other options for bringing the hamster with her. Spirit Airlines denied that a representative told Aldecosea to “flush or otherwise injure” the animal in a statement to Bustle, though the airline acknowledged that a representative did mistakenly tell Aldecosea that Pebbles would be allowed to fly on two occasions.

"After researching this incident, we can say confidently that at no point did any of our agents suggest this Guest (or any other for that matter) should flush or otherwise injure an animal," a spokesperson for Spirit tells Bustle via email.

Aldecosea reportedly contacted Spirit twice to ensure she would be allowed to fly home to South Florida with Pebbles, and was inaccurately informed on both occasions that this would be allowed, the Independent reports. “Our reservation representative, unfortunately, did misinform the Guest that a hamster was permitted to fly as an emotional support animal on Spirit Airlines,” the spokesperson tells Bustle. A spokesperson for Spirit told the Independent that "rodents of any kind are not allowed on board for health and safety reasons.”

“She was scared. I was scared. It was horrifying trying to put her in the toilet,” Aldecosea told the Herald. “I was emotional. I was crying. I sat there for a good 10 minutes crying in the stall.”

Aldecosea, 21, claims she had no other options once a Spirit representative correctly told her that the hamster could not fly home with her as originally planned, according to the Herald. She claims that she couldn’t have someone drive to the airport, hours away from her college, to pick Pebbles up without missing her flight, and wasn’t of age to rent a car to drive to south Florida with Pebbles. Additionally, taking a bus would have taken too long to get home, as she also reportedly claims she had to return to Florida “promptly” to deal with a health issue, according to the Herald. (Aldecosea reportedly purchased Pebbles after a cancer scare when she was a freshman at Wilson College in Chambersburg, Pennsylvania, according to HuffPost.) Facing an impossible decision between letting the animal go free outside, where it would likely get hit by a car, or flushing it down the toilet and ending its life in a “humane” way, Aldecosea opted for the latter.

She’s now thinking about filing a lawsuit against Spirit Airlines, per the Herald.

“This wasn’t a giant peacock that could pose a danger to other passengers,” her attorney, Adam Goodman, told the Herald. “This was a tiny cute harmless hamster that could fit in the palm of her hand.” (Goodman is referencing the story that went viral in late January of an emotional support peacock that was denied boarding a United Airlines flight.) Spirit offered Aldecosea a flight voucher for the inconvenience, a spokesperson tells Bustle, but “never heard back” from her.

"It is incredibly disheartening to hear this Guest reportedly decided to end her own pet’s life," the spokesperson says.

The Independent reports that the hamster did have a doctor’s letter certifying it as a comfort animal and that it was within the TSA height and weight regulations for animals that are allowed on planes. However, individual airlines make their own rules about which kinds of animals will be allowed on board. According to Spirit's guidelines on what animals are allowed, "Spirit does not accept snakes, other reptiles, rodents, ferrets, and spiders."