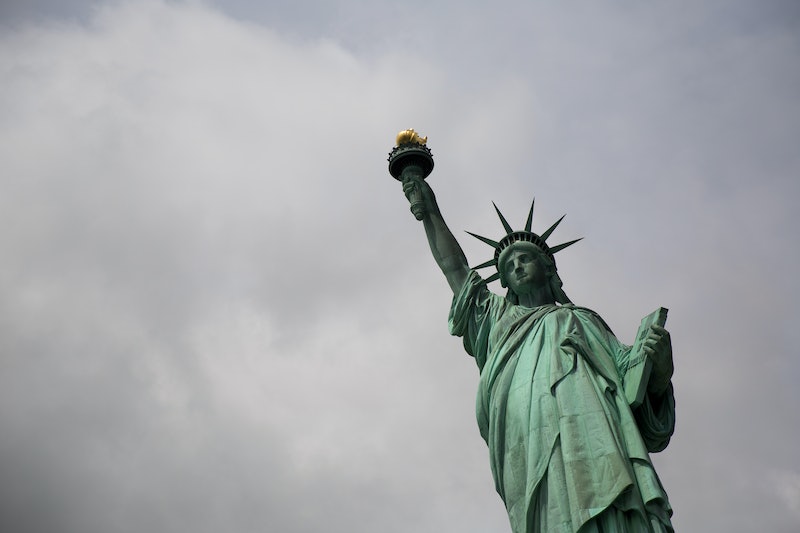 As Americans celebrate July 4th, CNN reports that a woman has climbed the Statue of Liberty, and the island is being evacuated. The woman in question has only scaled the base of the statue, according to CNN, and the New York City Police Department is reportedly attempting to get her down.

"Rise and Resist planned a banner drop today at the Statue of Liberty," the group tweeted after the woman was seen scaling Lady Liberty. "This action did not include the climber on the statue. Our action was completed earlier. While it was not part of our action, our first priority and concern is for the safety of the climber."

CNN and ABC 7 report that the woman was seen at various points walking around underneath Lady Liberty's sandal, waving what appeared to be a T-shirt or small flag, and lying on her stomach with her feet kicked up. Her motives are unknown, and it's unclear if she is protesting anything.

Nevertheless, Jerry Willis of the National Park Service told ABC 7 that Liberty Island is being evacuated while law enforcement attempts to get the woman down from the statue.

"We've had two unusual events occur back-to-back," Willis told ABC 7. "So for the safety and security of our visitors, we decided to evacuate for the day."

"It's our busiest week of the year, historically," Willis added. "The island at this time of the day is mostly near capacity, at 4,000 to 4,500 people. All boats have been tasked will moving people off the island. We have an evacuation plan. Given the heat of the day, the visitors complied with no issues." He also said that hanging banners from the Statue of Liberty is a violation of federal regulations.

Sgt. David Somma of the U.S. Park Police told CBS News that the woman refused to come down after being asked, and that her climbing of the statue was a "threat to public safety." Somma also said that law enforcement has "not been able to communicate with her," and that she hasn't told them why she scaled the base of the statue. CBS New York reports that officers from the NYPD's Emergency Service Unit is on the scene, and may have to rappel down the statue themselves to apprehend her if she doesn't descend on her own.

Rise and Resist was formed after the 2016 presidential election, and its members wrote about their July 4th protest in a press release Wednesday.

"Reflecting the sentiments of Saturday’s nationwide End Family Separation protests, members of Rise and Resist staged a visual protest at the Statue of Liberty on Independence Day," the group wrote. "Dozens of tourists cheered on the activists, and the protest was broadcast via live stream over social media."

The group cited several reasons for calling to dismantle Immigrations and Customs Enforcement, which has come under intense criticism recently for policy of separating undocumented children from their parents. Although that policy has since been repealed, over 2,000 children are still being detained separately from their parents.

“ICE has proved to be a threat to our liberty and way of life, and should be abolished,” Leon Kirschner, a Rise and Resist member, said in the group's press release. “They go after the most vulnerable among us, acting without due process to detain people. For-profit companies are making money off family separation. This has to stop now.”

As of this writing, the woman who climbed the statue is still there.