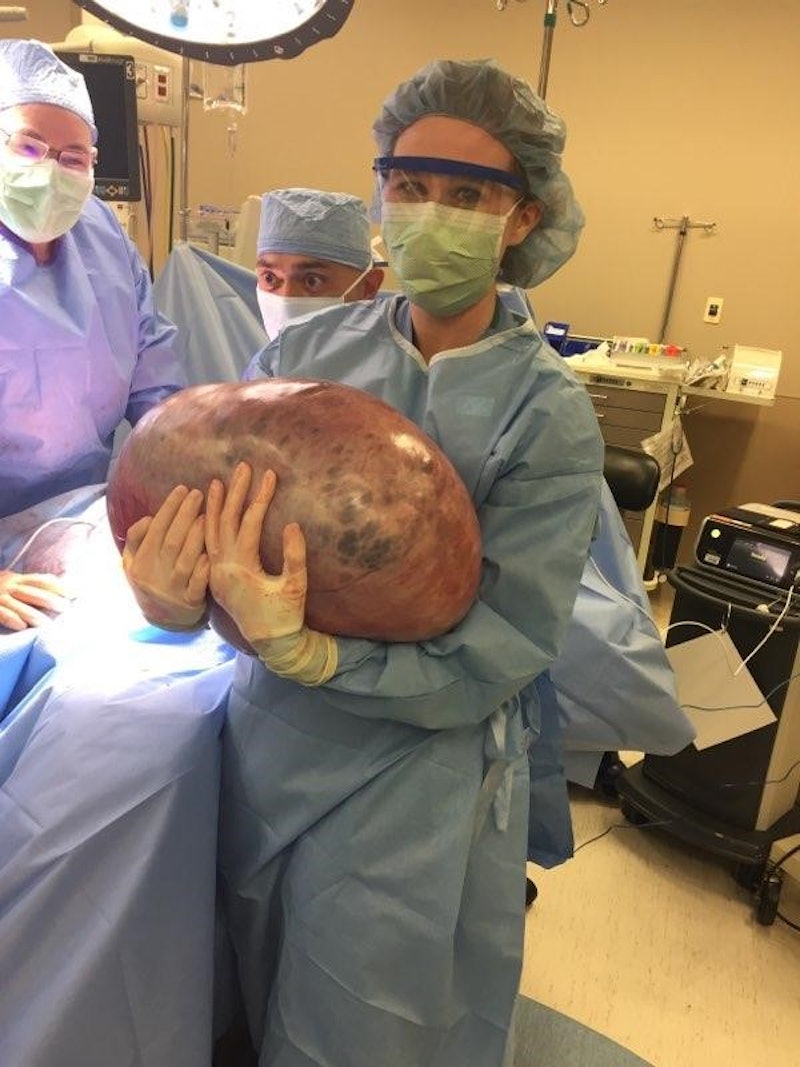 You likely know your body pretty well, and you know that sudden changes are something to pay close attention to because they could signal an underlying problem. Case in point: One Alabama woman went to the doctor for stomach pain, and ended up having a 50-pound ovarian cyst removed. After being told by doctors that weight loss would make her pain go away, the woman, Kayla Rahn, eventually went to the emergency room for "overwhelming" pain, according to NBC news affiliate WSFA 12. There, doctors discovered that the source of her discomfort was a rapidly growing ovarian cyst.

Dr. Gregory Jones, an OB-GYN at Jackson Hospital, where the removal took place, said the size of the cyst was startling. "This is one of the largest I have ever seen or certainly removed," the doctor, who was in the operating room, said. "We are very excited things went well for her." The cyst, know as mucinous cystadenoma, looks like a giant peach-colored watermelon. According to the Modern Medicine Network, mucinous cystadenoma is responsible for up to 15 percent of all ovarian tumors, and it can grow quickly. If medical stuff makes you queasy, you might want to scroll past the picture below.

Though generally benign, this type of cyst can turn malignant if ignored. Symptoms of this type of cyst can be vague, but include unexplained "increasing abdominal girth, abdominal or pelvic pain, emesis [vomiting], fatigue, indigestion, constipation, and urinary incontinence," Modern Medicine Network explained, referring to a case study that detailed a woman who had an 8-pound tumor removed. "Diagnosis is often delayed because women frequently fail to report symptoms or attribute them to other causes," the case study wrote.

Because women who have mucinous cystadenoma are often told the symptoms are being caused by something else, it's important to seek other opinions if something doesn't seem right, Dr. Jones told WSFA 12. Keep going back until someone listens to you. Rahn also told the news affiliate that she hopes her story will inspire others to advocate for themselves when they suspect a diagnosis may be incorrect.

If mucinous cystadenoma goes undiagnosed or untreated, women might experience extreme symptoms like Khan did. If you have lower abdominal pain and a swollen belly along with constipation, it's important to see your doctor. You may also experience feeling full after eating a small amount of food, nausea and vomiting, an abnormal menstrual cycle, an fatigue. Because all of these symptoms can mimic other illnesses, mucinous cystadenoma can be difficult to diagnose.

"There are several aspects involved in the diagnosis of a benign mucinous cystadenoma of ovary," ePain noted. "A thorough physical examination of the patient and medical history can give an idea of the existing problem. Blood tests and radiological scans may be ordered, as appropriate to confirm the diagnosis of benign mucinous cystadenoma of ovary."

While mucinous cystadenoma generally affects middle-aged women, all women can develop it. The Internet Journal of Family Practice reported a case of 19-year-old woman with an 8-pound cyst, which is large enough to cause discomfort. "Mucinous tumors are the [most common] large ovarian tumors, "Dr. Yvonne Dabota Buowari explained in the case study. "They grow into enormous size and are the largest gynecological tumors." If you have any of the aforementioned symptoms, make sure to consult with your doctor ASAP.