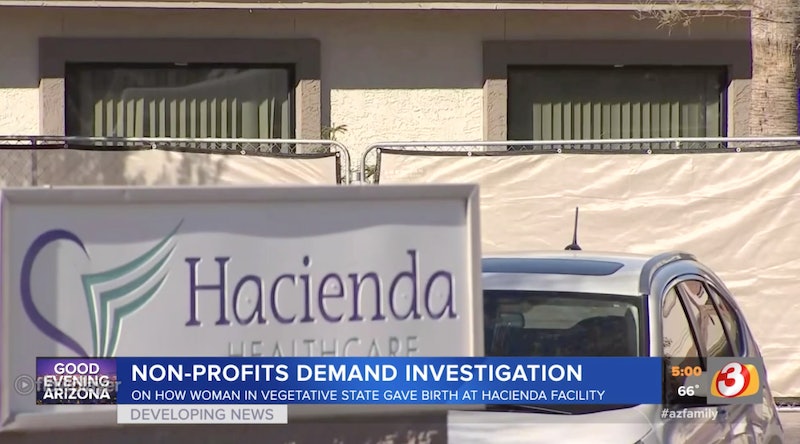 Despite living at a residential care facility for 10 years and being unable to give consent, an Arizona woman in a coma just gave birth. Local CBS channel KPHO reported last week that Phoenix police are investigating possible sexual abuse, while disability and sexual assault advocates say the case is a glaring example of a far-too-common problem.

Patients at residential care facilities who can't communicate can't give consent; others who are immobile also can't defend themselves. NPR obtained unpublished Justice Department data in January 2018 that showed some people with disabilities are between two and four times more likely to experience sexual assault — and that number is even higher for women.

"Opportunistic assailants are common, and we see them show up in all kinds of environments where there are inherent vulnerabilities," Kristen Houser, a spokesperson for the National Sexual Violence Resource Center, told Vox.

The details of the case are largely unreported, but sources told the local TV station that care givers were unaware of the pregnancy until the woman started giving birth. "From what I’ve been told she was moaning. And they didn’t know what was wrong with her," one source told the station. KPHO reported that a nurse at the facility delivered the baby, who is alive and healthy.

The CEO of the residential care provider where the woman has been living resigned. The company also issued a statement in response to the story and the national media attention it has received, noting its 50-year record of having "reliably and safely served thousands of residents," while also acknowledging the issue at hand:

We have recently become aware of a deeply disturbing incident involving the health and safety of a Hacienda resident. While federal and state privacy laws prohibit us from publicly discussing a patient’s health or case, Hacienda has and will continue to cooperate fully with law enforcement and all the relevant regulatory agencies regarding this matter.

Hacienda HealthCare said in the statement that the company is "fully committed to getting to the truth" of "an unprecedented matter." The company's statement also committed to a review of processes and protocols to prevent future abuse.

Arizona Coalition to End Sexual and Domestic Violence spokesperson Tasha Menaker told KPHO that the organization would expect a full investigation and to find the perpetrator, otherwise they might take further steps. She pointed out that the baby's DNA could connect police to the perpetrator.

"Many sexual assault perpetrators are actually looking for situations where people are in isolated or vulnerable positions, and because most perpetrators are not reported to police or their cases don't actually move forward, we always don't know if someone has a history of engaging in sexual harm against people," Menaker said. She went on to stress that preventing the same person from repeating the abuse was key.

The Washington Post reported that the Arizona governor's office would be looking into the matter, too. Patrick Ptak, a spokesperson for Gov. Doug Ducey, said officials are "reevaluating the state’s contract and regulatory authority as it relates to this facility and have been working closely with state agencies to ensure all necessary safety measures are in place."

More will need to be done, though, for reforms to reach across the country.