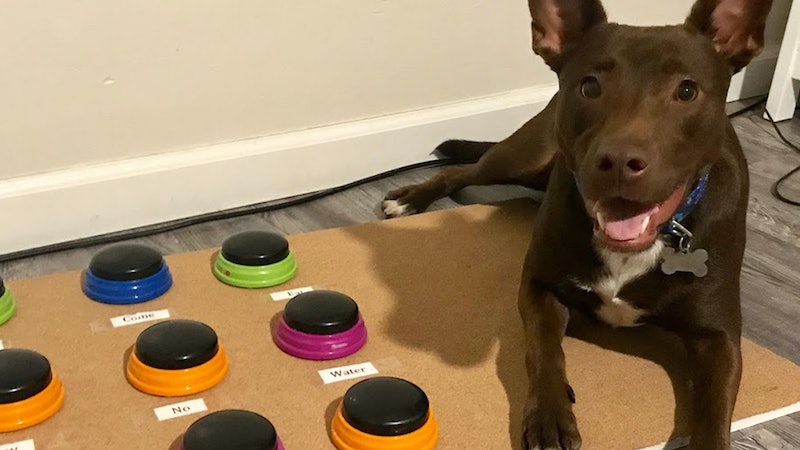 We've all spent hours watching YouTube videos of dogs sounding like they're speaking. But one dog is actually learning to talk like a human, thanks to her patient owner. Stella, an 18-month-old Catahoula/Blue Heeler mix, is learning how to use an adaptive device commonly used by young children.

By day, her owner, Christina Hunger, works as a speech-language pathologist, per People. But by night, she uses her skills to teach Stella how to communicate. According to Hunger, Stella already knows 29 words and can even form five-word phrases or sentences.

The system features a number of buttons that, when pressed, play a particular word out loud. Hunger began teaching Stella how to "talk" using the buttons when she was just eight weeks old. Now, Stella can reportedly express when she wants to go for a walk or to play, when she needs help, and even when she misses a particular family member. “The way she uses words to communicate and the words she’s combining is really similar to a two-year-old child," Hunger told People.

Stella can reportedly not only say what she's feeling, but also respond to questions Hunger asks her. Through her Instagram and Hunger For Words blog, Hunger has also revealed that the dog's language use alters if she feels distressed. For example, when Stella hears a noise outside, she is seen pressing the button for "look" repeatedly before saying "come outside."

"I’m in constant amazement and shock," Hunger continued in an interview with People. “Every day, she says something cooler than she said the day before.” The owner is planning to continue expanding Stella's knowledge and eventually wants to teach other dogs to "speak" in the same way.

Stella's training is based on Augmentative and Alternative Communication, also known as AAC. As Hunger explains on her blog, people have two language abilities: receptive language which is language understanding, and expressive language which is what we say. (The latter isn't always verbal.)

Hunger figured that even though dogs cannot speak in the same way as humans, canines can express themselves in myriad other ways from barking to jumping up in the air. She began by teaching Stella the word "outside". First, Hunger would press the button and say "outside" just before she opened the door. Eventually, Stella became aware of the connection between the word and literally going outside, and started pressing the button independently. As Hunger began introducing more words, Stella began learning more.

Hopefully, Hunger says, an accessible device that doesn't take up all your floor space will be invented. For those who want to start teaching their own dogs, there is a way. All you need is to invest in some recordable buttons and follow Hunger's guidelines. Soon, we could all be more in touch with our furry friends.