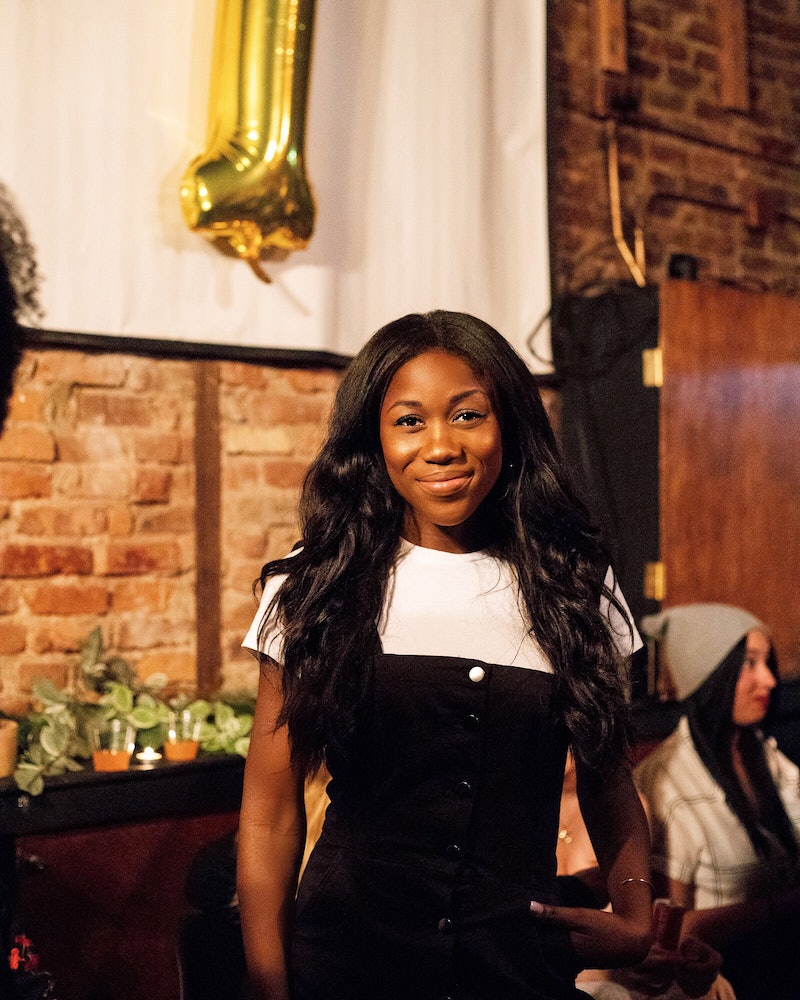 It's a Tuesday night in New York City's East Village, and all around Abby Adesanya, young women are moving in closer. Some sit on the floor of the bar, others perch on tables or crane their necks above the crowd.

Adesanya takes a deep breath, leans into the handheld microphone, and begins to read from her phone. It's a deeply personal essay, one that weaves together her relationship with her Nigerian mother and her American upbringing and hair and identity. Sounds of agreement, of recognition, ripple through the room. Several women wipe away tears.

For at least 10 minutes, Adesanya stands and reads, and the room is silent. This may be the most intimate birthday party I've ever attended — and I'm in a room of 100 strangers.

At 27, Abby Adesanya is the founder and leader of Novella, a modern literary salon based in New York. Oct. 23 was Novella's first birthday. The essay Adesanya read? It was the very first piece she ever wrote for Novella — and at the time, it was the first anything she'd written in years.

For at least 10 minutes, Adesanya stands and reads, and the room is silent. This may be the most intimate birthday party I've ever attended.

In September 2017, Adesanya was working a brand marketer for Conde Nast. Having grown up reading and writing stories, she'd fallen away from creating work on her own time.

"I wrote almost daily until I moved to New York after college, where I got caught up in the pulls of the city — brunches, parties, the like. Which, no shade, are wonderful things!" Adesanya tells Bustle. "But in a very out-of-a-movie way, it took a couple of years until I realized something was missing, and that was writing."

When she stumbled upon a stack of old composition books from her childhood, Adesanya felt a pang of homesickness. Not for her actual hometown, but for the worlds she used to create for herself.

The first Novella meeting was in a corner of Housing Works, a bookstore and cafe in Lower Manhattan. Over 40 women showed up to hear writer Roxanne Fequiere read "First Gold," a personal essay on her Haitian background and fraught relationship with gold jewelry. Then, after drinking wine Abby had bought with money from her day job, the women began sharing their own work.

"The energy in the room that evening was so joyful, it truly was electric," says Adesanya. "I was writing, and reading, about my own life for the very first time. It was not lost on me that I had finally felt like my own world was worth talking about."

Every month begins with a theme, sent around to participants beforehand via email. The very first was, fittingly, "Firsts." The second? "Gifted." October's salon, which ran the day after Novella's party, was centered around "Traditions."

The actual salons, which began selling out within the first 10 minutes several months ago, open the way the best events always do: wine, snacks, and socializing (and then maybe a little more wine). A guest speaker, usually a younger woman, often a woman of color, reads from her work.

Finally, the room splinters into small sharing circles, with women often sitting, literally, in a circle. One by one, each person reads their piece.

Kondomar Herrera, 32, has attended two salons. Her first piece, on "Beauty," was a poem. Her second was a journal entry about "Changes"; she wrote about driving through an old neighborhood and watching her former, personal landmarks evolve without her.

As someone who spends her days managing contracts and legal documents, Herrera rarely gets the opportunity to write creatively.

Neither does Carmen Minsal, 25, who works in grant writing. Minsal found Novella on Instagram after actress Emma Roberts' book club, Belletrist, featured Abby and Novella in their Stories last December. Carmen and her friend, Jessica Mitchell, 23, a tech company recruiter, had been trying to come to a salon for months before attending Novella's party. They both planned on attending the next day's salon.

Minsal and Mitchell say they were drawn to the idea of a creative community built by and for young women, and felt heartened by it being run by a Black woman.

"There's something about the experience of sharing," says Minsal.

"And saying, 'I have something to say,'" adds Mitchell.

"Yes! Yes, exactly," says Minsal excitedly. "'I have something to say.'"

Minsal, for one, plans to incorporate the monthly salon, and the process of thinking, writing and sharing something personal, into her self-care routine.

"Yes! Yes, exactly," says Minsal excitedly. "'I have something to say.'"

Fostering this exact sense of freedom has propelled Adesanya forward over the past year. "We are so often taming ourselves for the comfort of others and it is so important to feel safe in spaces like ours where we can speak freely, openly, and learn from one another," she says.

In a city that never stops working, among a generation the rest of the world writes off as tech-addicted, there was barely a lit iPhone screen visible in the room during Novella's first birthday. No one stood awkwardly in a corner. No one was blocked from a conversation. The din was overwhelming — what you'd expect from what feels like 100 different discussions, all being shouted, joyfully, over one another. Everyone, it seemed, was sharing something of herself — a smile, a story, a willingness to listen. And as the guests slowly filtered out into the chilly night, their conversations, of plans for the future, for new projects, broke through the dark.