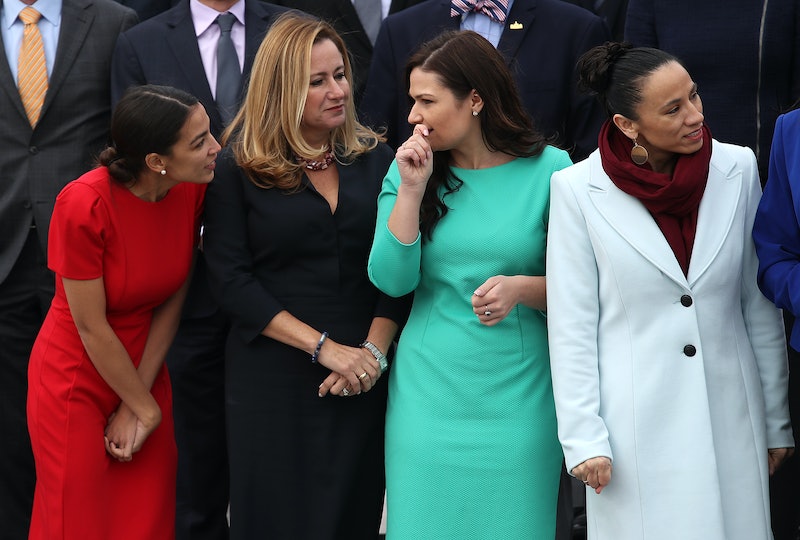 About two months after the midterm elections, incoming representatives and senators are finally moving into their new work digs — and incoming Rep. Abby Finkenauer's photo of her Capitol Hill office showed just how special that moment can be. Finkenauer, a Democrat who won the House race for Iowa's First District, tweeted a picture of her parents visiting her office on Jan. 2. "My first visitors," Finkenauer shared, before giving more detail about what it meant for her parents to be there.

Finkenauer wrote, "I call this one: 'A retired union pipefitter welder and retired public school secretary walk into their youngest daughter’s Congressional office.'"

Finkenauer's election victory isn't just a milestone for her — she is also notably the first congresswoman to be elected to represent Iowa's First District, according to The Gazette. The publication further reports that Finkenauer thanked her parents in her victory speech following the midterms, joking that their investment in a subscription to Newsweek for a 10-year-old Finkenauer "finally paid off."

Tough is my dad on a 16-hour shift. Tough is my mom holding down a job and holding it together back home. Tough is my grandpa rushing into burning buildings to save people’s lives.

But Finkenauer didn't just talk about her own working class roots during the campaign — she also appealed to the working class demographic as the people she wanted to work for from D.C.

Per The Washington Post, Finkenauer said during her campaign that she sought to represent the Iowans who want “enough money at the end of the week to send their kids to baseball and softball practice and buy a case of beer.”

Finkenauer has also shared her experience as a first-generation college student, dealing with the pressure of paying off student loans. At 29 years old, she said to Time magazine in November, “There’s a whole generation of folks that are around my age ... who are not doing as well as our parents did. Everything is getting delayed right now and, and not because of necessarily folks want it to be, but just the economic reality of it."

Finkenauer has also noted in the past how little her parents discussed politics growing up. To The Atlantic in July, she talked about how she understood why so many people in her district voted for Trump, because many people were tired of the standard politician. Finkenauer said, “[When I was growing up], Dad was talking about — when he was home on the weekends — how he would love to get on the river and go fishing. So we were talkin’ about if the walleye were biting and where.”

Finkenauer is now the second-youngest person in Congress, next to Alexandria Ocasio-Cortez. To The Atlantic, she described her version of the Democratic Party in a surprising way. “I am my grandfather’s Democrat,” she said. “He was the former president of the Iowa Firefighters Association. He loved Joe Biden.”