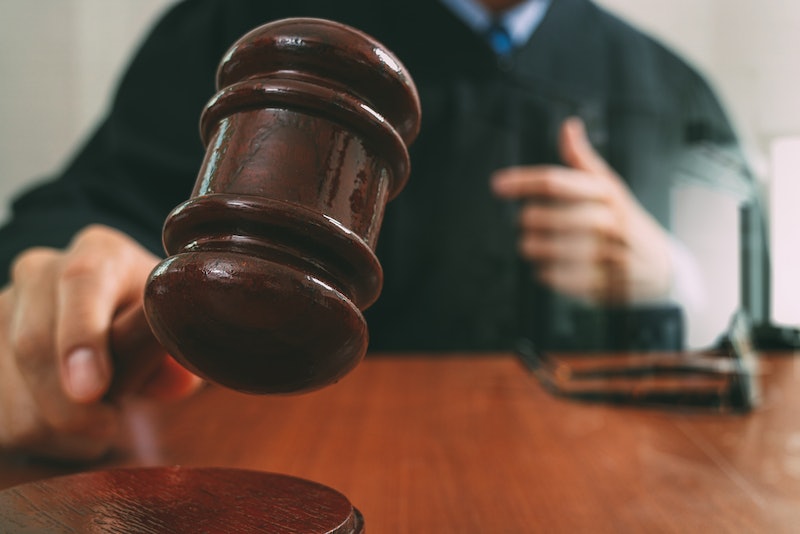 everything possible/Shutterstock
By Danielle Campoamor
November 26, 2018

I was 23 years old when I had my abortion, and, at the time, unaware of the privilege my age provided me. I didn't have to consult with a parent or guardian in order to legally obtain the abortion care I needed, or ask if I could have an abortion without my parents knowing. But not every person seeking abortion services in this country can say the same. Currently, 37 states require parental involvement of some sort in a minor's decision to have an abortion, according to the Guttmacher Institute, a requirement that opponents argue puts an undo burden on those who need the most support. But there is one method by which minors in these states can obtain an abortion without consulting their parents. Known as judicial bypass, it is for countless young people across the country the only way to bypass parental consent requirements in order to have an abortion.

"Judicial bypass only occurs in states that have parental notification or parental consent laws," Blake Rocap, the legal director at Jane's Due Process, a Texas-based legal referral service for pregnant teenagers, tells Bustle. On multiple occasions, the U.S. Supreme Court has addressed the issue of whether requiring parental notification undermines minors' abortion rights and ruled that, "It violates the Constitution for any person to have veto power over another person’s right to access abortion," Rocap summarizes, including people under the age of 18. In Bellotti v. Baird in 1979, the Court decided that states could require parental consent or notification before allowing a minor an abortion if there was a way to bypass the requirement in certain circumstances. While subsequent cases have questioned whether requiring a bypass also violates minors' abortion rights, judicial bypass is currently the most common way to get around parental consent and notification laws.

"Most states want you to show that you are mature enough to make the decision by yourself without involving your parent," he says. "They want to know that you're well informed enough to make the decision, so you've considered your pregnancy options which would include becoming a teen parent or carrying the pregnancy to term and putting the baby up for adoption." In order to make that determination, a minor seeking a judicial bypass appears in front of a judge and, essentially, pleads their case for an abortion.

According to Rocap, the steps a minor needs to take in order to obtain a judicial bypass include:

While step two can sound daunting, Rocap says most health care clinics that provide abortions will point you in the right direction. "The clinic will say, 'Look, you're not 18 so you either have to notify your parents, get your parents' consent, or get a judicial bypass,'" he says. "'Let us refer you to someone else who can help you with that or make sure you schedule your abortion at a time when your parent can come and sign the appropriate paperwork.'" Once you're assigned and/or obtain a lawyer, you'll meet with them, tell them about your decision making, and they will ask you questions about your decision in order to best represent you to the court.

"It was great working with a lawyer," Veronika Granado, from South Texas, who had an abortion after obtaining a judicial bypass when she was 17, tells Bustle. "I was a little nervous because I wasn't entirely sure who I was going to get, but when I met with her everything was OK. I was able to tell her my story, and I felt a little bit more connected to her. I felt like my lawyer might judge me for some reason or have her own opinion about me, but she totally understood me, and she knew that this is what I had to do, and it was the best decision for me. She really supported me the whole way, and she was really understanding."

Once you've met with your lawyer, obtained an ultrasound from a health care provider, and submitted the necessary paperwork, Rocap says, "you go before a judge and tell them about your decision, about the information you’ve received from the counselor or the physician at the clinic, and the relationship you have with your parents." And because discussing a parental relationship can be harrowing and traumatic, ahead of time Rocap gives all of his clients a sense of the questions they can expect, so they can best navigate any triggers or emotional repercussions of re-living any trauma or abuse.

"Mostly, I prepare them like any other client," he says. "I treat them with the respect that their story and their decision deserves. I give them all the facts — I am trying to put the best evidence on to get your bypass granted. I am going to ask you questions, you should tell the truth, you’re going to be sworn in like any other witness in court, and the judge is probably going to ask difficult questions, so answer honestly and with conviction. And, hey, this might be difficult, but I am here to help you, the counselors at the clinic are here to help you, and your case manager is here to help you throughout your decision making process."

HK Gray, 18, from Dallas, Texas, was granted a judicial bypass and had an abortion when she was 17. "I was already a teen mom," she tells Bustle. "I had already had a baby, and she was a couple months old. My dad was homeless, and my mom was on the run from the police, and I was living with my boyfriend and the father of my daughter at the time. There was really no way for me to get any parental consent, so judicial bypass was really the only option for me to get my abortion."

According to Rocap, many of his clients are what he considers de-facto orphans: living with an aunt, grandmother, or member of the community who doesn't have official legal custody of them. "[My clients] may have involved all the appropriate authority figures and parental figures in their life, but that doesn't reach the legal standard that most states have for a parent being informed or give consent," he says. Which is why Rocap considers judicial bypass to be another unnecessary barrier to abortion care. "It’s silly to have people make those justifications to a judge, when all the research shows that young women go through the same thorough decision making process as women over the age of 18, and in consultation with their physician or health care provider they don’t need this extra authority to justify their decision making to," he says. "It’s another way to put obstacles in front of people who want to have an abortion."

The American Academy of Pediatrics (AAP), the American Medical Association, the Society for Adolescent Health and Medicine, the American Public Health Association, and the American College of Obstetricians and Gynecologists all oppose parental involvement laws, according to a 2017 updated policy statement from AAP News. "Adolescents have the right to confidential care when seeking abortion services," the statement reads, citing research that has shown that "younger adolescents are likely to involve a trusted adult when seeking abortion services regardless of whether a state law mandating parental notification is in place." The same parental involvement laws have also increased the number of second-trimester abortions in the states that have enacted them, according to the AAP.

Gray was in her second trimester — 14 weeks — when she was seeking her judicial bypass, so she knew she had to act quickly since abortions in Texas are banned past 20 weeks gestation. She found Jane's Due Process online, and while she believes the process was "annoying," Gray doesn't describe it as horrible. "When I saw that I needed parental consent, Jane’s Due Process just popped up," she says. "I called them two days after I found them online. As soon as I called them, they were super nice, super helpful, and they got me in contact with a lawyer that same day, and I met up with a lawyer a week or two later, and the lady had all the paperwork for me, and basically most of the time I was there she was just trying to figure out my whole situation and trying to make it to where the judge would understand my situation."

Elizabeth*, 20, from Houston, Texas, had an abortion after obtaining a judicial bypass when she was 15. She found out she was pregnant at school, and after a friend suggested they look up their options in the computer lab, they found Jane's Due Process online. She called the Jane's Due Process' hotline and learned that she could get an abortion without her parents knowing if she went to court.

"An attorney called me and asked me some questions about my situation and asked if my parents would physically or mentally abuse me if they found out," she recalls. Elizabeth and her lawyer determined that her parents would, so she scheduled an ultrasound, met with her lawyer, and went before a judge to state her case. "The only thing I had to do was bring what I needed, which was my ultrasound and a guardian — and the guardian was my attorney. And we just sat in a room and just talked about the case, and it was just one day that I had to go talk to the judge."

Elizabeth was granted a judicial bypass the same day and had her abortion procedure two weeks later. "I think judicial bypass is a wonderful thing," she says. "I am so thankful that it exists. I don't know what I would have done if I couldn't have had an abortion without my parents knowing."

The prospect of speaking to a lawyer, going to court, and appearing before a judge can be daunting, but you're not alone in the process. "There are resources out there and lawyers who do this on a pro bono basis to make sure that everyone gets the health care they need and want," Rocap says. If you're in Texas you can visit Jane's Due Process' website or call their hotline at 1-866-999-5263. If you're in another state, Planned Parenthood's website provides a list of states that require parental involvement and can connect you with a judicial bypass resource in your area.

Regardless of your age, you deserve and have the constitutional right to make your own health care decisions about your own body — with or without parental involvement or consent.

More like this
Young People Are Still Experiencing Period Poverty In UK Schools
By Sophie McEvoy
It’s Official: 'The Bachelorette' Is No Longer A Fairy Tale
By Samantha Allen
The 5 Best Underwear For Preventing Wedgies
By Lisa Fogarty
Beyoncé & Madonna’s “Break My Soul” Remix Honors A Group Of Black Icons
By Stephanie Topacio Long
Get Even More From Bustle — Sign Up For The Newsletter