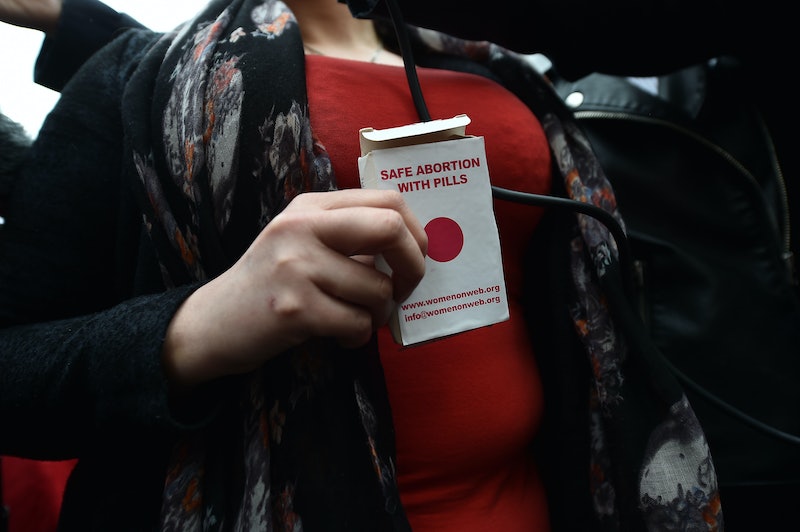 Welcome to Bustle's Abortion AMA column, where reproductive justice advocate and Romper editor Danielle Campoamor speaks to experts and medical professionals to answer people's questions about abortion in a way that is educational, unvarnished, and judgement free. Ask us anything.

If you've been considering getting an abortion, especially a medication abortion, you may have heard of abortion reversals. There's a lot of conversation about them right now, especially because five states — North Dakota, Nebraska, Oklahoma, Kentucky, and Arkansas — passed laws this year requiring physicians to tell their medication abortion patients they can reverse an abortion if they change their mind. Three other states — South Dakota, Utah, and Idaho — already require doctors to say this to patients. Unfortunately, the statement isn't rooted in medicine or science.

To evaluate the claims being made about abortion reversals, it's important to understand how medication abortion works. Medication abortion is administered via two oral pills — mifepristone and misoprostol. The first pill, mifepristone, blocks progesterone, the so-called "pregnancy" hormone that nourishes an early pregnancy and keeps the lining of the uterus thick. The second pill, misoprostol, is taken the same day or up to 72 hours later, and causes the cervix to soften, open up, and for the uterus to contract and expel the pregnancy.

In 2012, Dr. George Delgado, M.D., a family medicine doctor and director of Culture of Life Family Services, a "crisis pregnancy center," published a study claiming that it is possible to reverse a medication abortion after the first pill, mifepristone, is taken. Dr. Delgado publicly opposes abortion and in 2018 was a keynote speaker at the Right To Life Conference, according to his personal page on the Catholic Speakers Organization website.

Dr. Delgado's abortion reversal study, which involved only seven women, claimed that after taking mifepristone, the drug that blocks progesterone, to initiate a medication abortion, a patient could flood their body with progesterone, and the influx in hormones would essentially reverse the effects of the mifepristone. According to The New York Times, when this protocol was followed in the seven pregnancies studied, two still terminated, four went to term, and one participant didn't follow up with the doctors.

Bustle reached Dr. Delgado for comment, but he did not provide one before publication.

"I agree that it's not a totally crazy idea, but there are also a lot of reasons why it might not be such a good idea," says Dr. Daniel Grossman, M.D., professor of obstetrics and gynecology at University of California, San Fransisco (UCSF), and director of Advancing New Standards in Reproductive Health (ANSIRH) at UCSF, a collaborative research group, who has been studying medication abortion since 2008. "First of all, in a normal pregnancy, a patient’s body already has a lot of progesterone in circulation, and it’s unclear that adding a bit more would do much," Dr. Grossman says. "We also just really don’t have data on how safe that is, which is another reason why we don’t recommend people start doing this."

According to a one-sheet distributed by the American Congress of Obstetricians and Gynecologists (ACOG) in response, Dr. Delgado's 2012 study wasn't reviewed by an ethical committee or supervised by an institutional review board (IRB). It also didn't have the presence of a control group or groups, and as such is among "the weakest forms of medical evidence," per the ACOG. ACOG doesn't recommend the use of progesterone to "reverse" a medication abortion, saying it is not supported by science, and Delgado's findings have not been reviewed by the Federal Drug Administration (FDA).

In June of this year, the American Medical Associated (AMA) filed a federal lawsuit against the state of North Dakota, saying the state mandating doctors tell their patients about so-called "abortion reversal" violates the AMA Code of Medical Ethics.

"There is a lot of missing information from the reports," Dr. Grossman says. "So it’s very confusing to try and sift through them. But I can say that when you do sift through them, there’s really no evidence that this treatment, that giving progesterone after a woman takes mifepristone, is any better than just watching and waiting."

According to Dr. Grossman, mifepristone by itself isn't a very good abortion-causing drug. "It needs the second medication as well," he says. "And at least a quarter of the patients who just take mifepristone alone will continue to have a normally developing pregnancy."

One factor that may determine whether more states force doctors to tell patients they can have a reversal is a study forthcoming from the University of California, Davis. In December 2018, Dr. Mitchell Creinen, M.D, an OB-GYN and researcher there, received a grant from the Society of Family Planning, an organization that funds the scientific studies of family planning when they're underfunded by the government and/or scientific community, to study so-called "abortion reversal." According to ClinicalTrials.gov, a site from the National Institute of Health that tracks clinical trials, the study will include 40 pregnant women in the early stages of pregnancy who are seeking surgical abortions. Per a 2019 report from NPR, the women will be offered mifepristone and either a placebo or progesterone. If any of the women remain pregnant, they will then be offered a surgical abortion. The purpose of the study is to either confirm or disprove Dr. Delgado's claims.

Even if the study does find evidence that taking progesterone after mifepristone acts as an early "abortion reversal," very few pregnant people choosing abortion are likely to use it. A number of studies show that most people who have abortions make the decision before they make the appointment and do not regret the decision to end their pregnancies, so Dr. Grossman says he worries that the perceived option to "reverse" an abortion would actually encourage people to rush to a decision they aren't otherwise ready to make. His fear is that they will go through with the beginning of an abortion thinking they can change their minds halfway through, when that's not necessarily the case.

"For patients I see, I would always recommend [treatments] that I have good evidence to support," Dr. Colleen Denny, M.D., a clinical assistant professor in the Department of Obstetrics and Gynecology at NYU Langone Health, tells Bustle. "We have good evidence that this combination of pills is good for ending early pregnancy, and we have good evidence, for people that need more time, that they benefit from counseling and accurate information."

Rather than counting on the idea that people can change their mind 24 hours after taking the first medication abortion pill, Dr. Denny wants her patients to feel sure of their decision before they begin an abortion or, alternatively, pass the legal deadline for having one and keep their pregnancies. "If you don’t feel like you’re ready to make that decision, take a little more time, talk to your support people, come back to us. It’s rarely a time crunch at that point, so we have much better evidence that what happens if you decide to continue the pregnancy, or you if do decide you want the medication abortion and take both sets of pills."

If you do, however, decide to have a medication abortion, take the first pill, then change your mind, Dr. Grossman's clinical recommendation would be to follow the pregnancy and simply see what happens. "If it's within an hour of taking the mifepristone, there may be some benefit to try to induce vomiting," he says, "because the pill wouldn't be fully absorbed yet." Per the ACOG, mifepristone does not cause birth defects, so if you do take the first pill and change your mind and continue to carry your pregnancy to term, the fetus won't be harmed by the early introduction of the first pill.

Otherwise, Dr. Grossman says it's best to avoid flooding the body with progesterone in the hopes you could somehow "reverse" the abortion. If you take both medications and then change your mind, Dr. Grossman says there's nothing you can do. "There’s no evidence that even giving progesterone reverses the mifepristone," he says. "But even Delgado agrees that there’s no treatment that can specifically be done after the patient has taken the misoprostol."

Dr. Denny has never had a patient take the first pill and then change their mind but believes that because abortion is so common, there will be a small number of people who do change their mind, and within that number, there will, indeed, be someone who changes their mind mid-abortion. And that persons deserves factual, science-based information as they make their own decision.

"It’s so hard for medical professionals to find the right outlet to reach patients and counterbalance all the false claims and fear mongering that goes on, especially regarding reproductive health," she says. "Honestly, it's just super disheartening. The misinformation has been out there for years, and it’s just getting louder and louder, and we’re not doing a good job of pushing back. We’re not doing a good job of teaching people to be savvy consumers of medical science, and that makes it really hard."