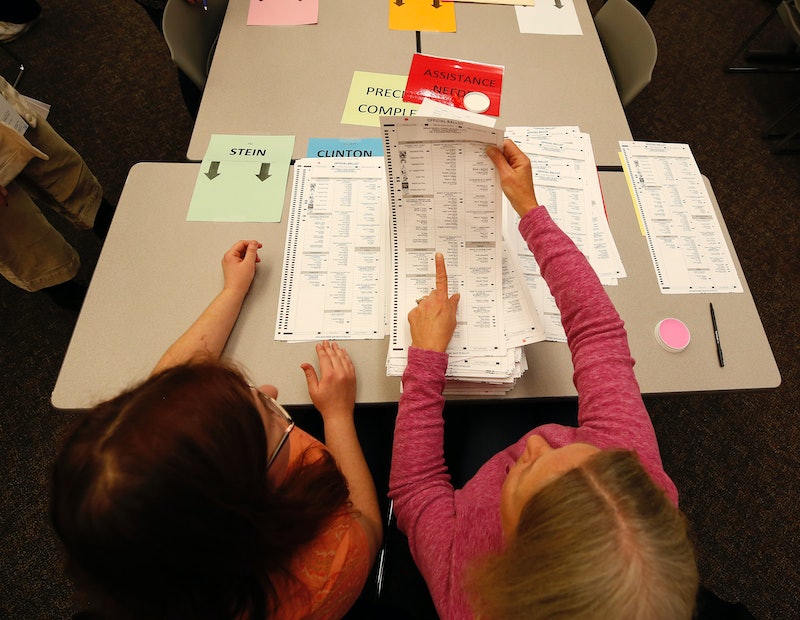 On Thursday, the ACLU accused California of discarding ballots from 45,000 voters during the 2016 general election, and announced that it has sued the state for voter disenfranchisement. The civil rights group said that county election officials threw away tens of thousands of absentee ballots from registered voters because the ballot signatures allegedly didn't match those on their voter registration forms, and added that this may have disproportionately affected Latino and Asian voters. Bustle has reached out to California's Secretary of State for comment on the ACLU's allegations and legal action.

"Signatures may have variations for a number of reasons," the ACLU wrote in a press release. "Signatures can change over time or with a change in the writer’s physical condition. Signatures may vary depending on whether the writer is standing or sitting and what instrument or surface they use to sign. Many voters do not have a consistent signature style and may simply not know that they are supposed to sign their ballot in the same way that they signed their registration."

The group noted that the county election officials tasked with confirming ballot signatures aren't trained in handwriting analysis, nor are they required to inform voters whose ballots are thrown out. The ACLU referred to this as "a recipe for widespread voter disenfranchisement."

In the lawsuit itself, the ACLU notes that, although California law requires voting officials to toss ballots with mismatched signatures, it provides no criteria or guidance for election workers to follow when making this determination. Furthermore, because the state doesn't have to notify voters who cast ballots with allegedly mismatched signatures, Californians whose ballots are discarded for this reason have no chance to rectify their mistake.

As the lawsuit notes, this isn't the case with voters who don't sign their voting envelopes altogether; under state law, such voters have eight days to fix their error through one of several means, and have their ballots counted. Because of this apparent discrepancy in law, the ACLU argues that California law "violates equal protection guarantees."

“People should not be denied their right to vote because a government official doesn’t like their penmanship, but that’s exactly what is happening in California,” said Michael Risher, an attorney with the ACLU of Northern California. “One disenfranchised voter would be too many, and we’re seeing tens of thousands of wrongly rejected ballots every election cycle in California alone.”