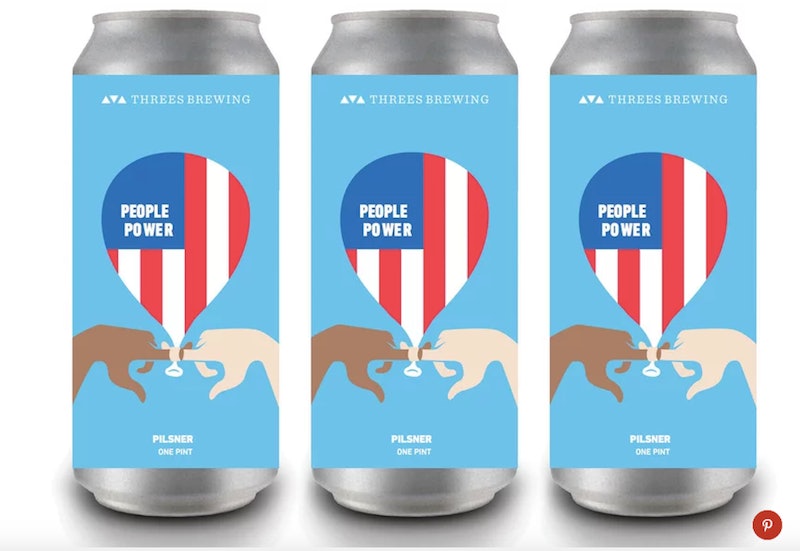 The Fourth of July is all about celebrating the things that actually make America great, like the promise of independence, equality, and justice for all people. So, it only makes sense that one of our country’s foremost organizations fighting for equality, the American Civil Liberties Union, would be a part of our Independence Day celebrations. An ACLU-themed beer is launching July 4 as a partnership between craft breweries across the countries in honor for the civil rights’ organization. Independence never tasted so hoppy.

The beer, dubbed People Power, was inspired by the ACLU’s grass movement of the same name. The ACLU’s People Power is a self-described “grassroots army,” working with volunteers and activists across the country to enact change and enforce equality at every political level. “This idea inspired many of the nation's craft brewers to create their own interpretation of People Power Beer, in support of the ACLU and their essential work,” states the People Power Beer website.

Starting July 4, participating breweries in over a dozen states across the country will sell the ACLU-themed beer. The beer will be available for purchase until November 6, our 2018 midterm election day. 10 percent of the People Power beer proceeds will go to the ACLU.

Josh Stylman, the co-founder of Threes Brewing in Brooklyn, is responsible for the initial idea and getting almost 30 craft breweries across the country on board. In an interview with Food and Wine, Stylman says the project is a shared effort, “co-owned by every brewery that signs on.” Stylman added, “We’ve been so excited to see such enthusiasm from other breweries, and we hope that they’ll each take up the idea and run with it, to create whatever brews (as well as supporting events, activations etc.) they’d like in support of the ACLU.”

Currently, 29 breweries have come on board and taken the pledge. The pledge, as laid out by the People Power Beer website, honors the founding principles of the ACLU and commits to “protecting the most vulnerable in our society.” The pledge also states:

“Why would a brewery focus on civil rights threats in our culture? We brew beer for the moments we celebrate and the way it brings people together. Throughout the nation, breweries are pillars in local communities, creating gathering places in our neighborhoods. As we are uniquely positioned to raise awareness and bolster civic engagement, we feel a moral imperative and a patriotic duty to act.”

The website also invites other breweries to Take the Pledge, bringing both the beer and the ACLU’s tools to a local level.

What does an ACLU-themed beer taste like? Well, a lot of different things. “Part of the idea is that breweries will express themselves in whatever way best represents their own ethos. Like any ground up movement, People Power beer will come in many styles (and, flavors!),” Stylman told Food and Wine.

For Stylman’s Threes Brewing, the People Power beer will be a Pilsner. The can will feature limited-edition art as well as a description about the project and where the proceeds will go. Like in government and life in general, diversity and inclusivity is key in the People Power beer project. “We don't have hard goals on the sheer numbers of breweries,” Styleman said to Food and Wine, “but we're thrilled with the result.”

And if you’re super concerned about taste, your palate will be pleased. Paste Magazine ranked the Threes Brewing’s Pilsner number 14 out of 134 beers. Plus, when else can you drink a beer that actually tastes like freedom?

You can check out the full list of participating breweries at PeoplePowerBeer.com. If you’re looking to roadtrip for the fourth and haven’t picked a place, there are 29 different contenders.