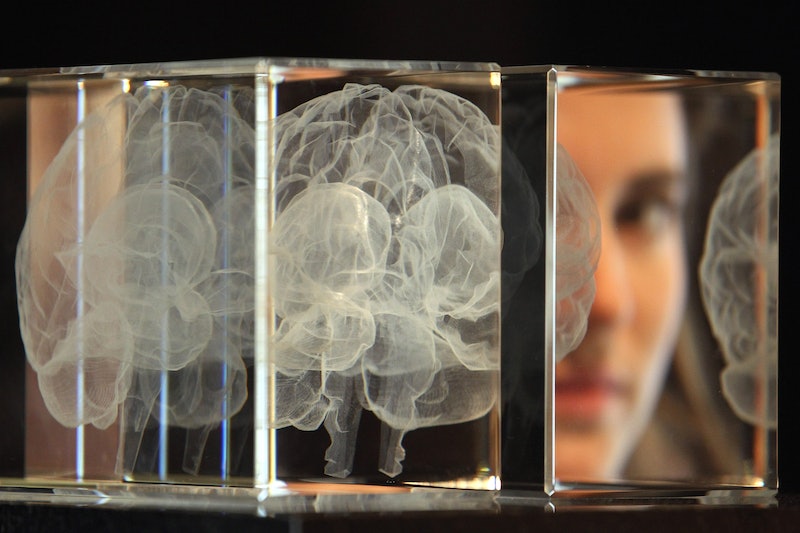 Many of us have, at some point or other, pretended to be somebody else — whether it's in an acting class or in a pretend conversation with a talk show host in the shower. That role-playing, it turns out, isn't just a passing thing; it can alter the way we think. A new study published in Royal Society Open Science has discovered that when acting students take on different roles, the activity in their brains changes fundamentally — and that could have big implications for how acting as a different person could help people beyond the theater.

The study recruited university-trained actors and asked them to answer questions either as themselves or in character (Shakespeare's Romeo or Juliet, depending on their gender). While they were answering, they were given an MRI, or magnetic resonance imaging scan, which measures blood flow in different regions of the brain. It turns out that when they were answering in character, complete with different accents — the actors were Canadian and gave their characters British accents — their brains responded very differently.

In the actors' brains, the scientists wrote, acting "modulated processes related to attention, perspective taking and embodiment." Surprisingly, acting "produced global reductions in brain activity and, particularly, deactivations in the cortical midline network of the frontal lobe, including the dorsomedial and ventromedial prefrontal cortices." This reduction in activity didn't mean the answers were slower or in some way delayed, though; it meant that the actors were suppressing their natural responses and replacing them with their character's ideas.

This is one of the first studies of the neuroscience of acting, and it's interesting for a lot of reasons. When we're pretending to be somebody else, the scientists wrote, we're devoting a lot of our mental resources — our sense of "embodied self", which has "only one voice, one face and one body" — to being another character, which means that the resources devoted to our own personality are reduced.

If you're not an actor, though, these findings can still be interesting. For some, the studies findings may be reminiscent of a kind of therapy that uses acting to help a patient dissect their issues from different perspectives. Family systems therapy, for example, asks families to take on different roles during sessions to help them tackle their issues as a unit. Even on your own, acting in therapy can be useful; a model called internal family systems therapy asks people to take on the roles of their own internal "family" of sub-personalities and trait, to voice how they interact with each other inside one person. (You might find this system familiar if you saw the Pixar film Inside Out.) Often, Psychology Today explains, "these sub-personalities consist of wounded parts and painful emotions such as anger and shame, and parts that try to control and protect the person from the pain of the wounded parts."

A study in 2013 found that internal family systems therapy was helpful for novice therapists to come to terms with their own emotions, while other studies have found it's good for teenagers battling feelings of shame, survivors of childhood sexual abuse and even people with the chronic condition rheumatoid arthritis. The idea of taking on the personality and 'character' of your own feelings — whether they're shame, anger, sadness or something else — is very Inside Out, and it can help people with conflicting emotions start tough conversations with themselves and others.

So how does this new study fit in? It sheds light on what happens in the brain when people take on new roles, whether in therapy or onstage. The brain radically shifts the ways in which it handles things like attention and focus. "Changes in embodiment," the scientists wrote, "can lead to neural changes in networks associated with perspective taking and role change." That may not change the brain long-term, but it shows that playing roles opens new neurological doors.

The people in this study were trained actors, so it's possible that when non-actors take on another character, whether it's a person in an anecdote or their own feeling of sadness or shame, the neural changes aren't as extreme. However, it's worth remembering that if your therapist asks you to take on a new role in a session, it's doing something very interesting to your brain — and that may result in breakthroughs in the future.