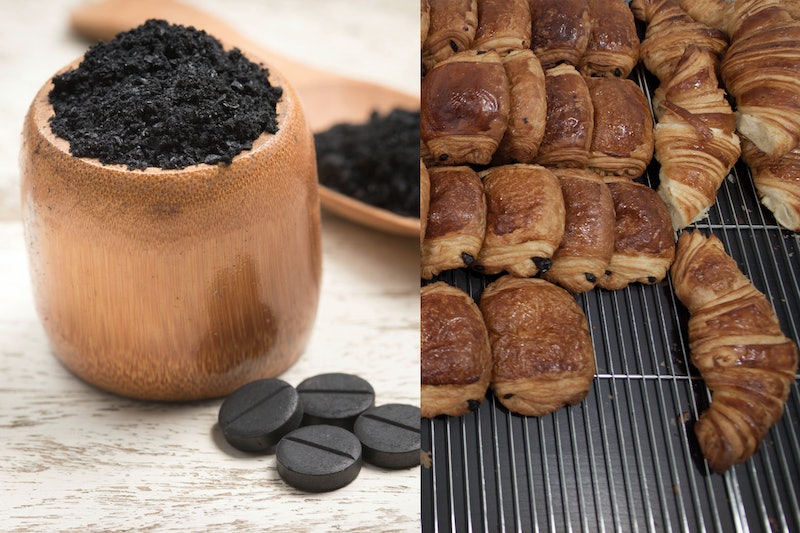 Activated charcoal is hailed as a buzzy “superfood” in various alternative wellness circles, and is currently found in everything from toothpaste, beauty products, and cleanse formulas, to ice creams, lemonades, and juices surely flooding your Instagram feed. But now, Yahoo Lifestyle reports that activated charcoal croissants are a thing, and, let’s face it —it's no wonder why they're so controversial.

Originally spotted at Italian snack bar Coco di Mama, the inky looking confections apparently “taste better than they look,” according to Coco di Mama’s website, which is reassuring, right? Twitter user Amy Charlotte Kean decided to snap a pic of the culinary curiosity, and her post has since gone viral — who knew that a pastry could cause such a stir in the Twitter-sphere?

A popular London cafe recently put vegan black-hued croissants on their menu, and lots of folks are up in arms. Many have deemed the croissants too much, "even for east London,” Mashable reports. A spokesperson for Coco di Mama told Mashable that the main ingredients for the vegan croissant are “sunflower margarine, flour, activated charcoal, sugar, and lemon.” And that the alkaline properties of the charcoal “help to detoxify any poisons in in the body by neutralizing excess stomach acids.”

According to WebMd, activated charcoal (also known as coconut ash or activated carbon) is used in hospitals to treat poisoning or a drug overdose, and that drugs and toxins bind to charcoal when it’s activated — helping rid the body of toxic stuff. Less-studied uses of activated charcoal include treating treating certain pregnancy complications (cholestasis), reducing high cholesterol, and preventing a hangover, but further studies are needed to prove its safety and effectiveness — according to WebMD.

Charcoal is made from wood, coal, and various other substances, and becomes “activated” when exposed to high temperatures combined with an activating agent, expanding its total surface area. This makes for a super porous substance adept at absorbing toxins.

While activated charcoal is showing up in anything from face masks to pancakes these days, does it really live up to all the supposedly health-promoting hype? And is it safe to consume on the regular? According to Eater, food grade activated charcoal is usually made from coconut shells, and we know that it’s super efficient at soaking up all the little molecules that lie in its wake. But the substance doesn’t really discern between what’s toxic and what isn’t; so while it will absorb certain toxic substances in the body, it can also slurp up your medications or nutrients from the foods you eat, which is less than ideal. In extreme cases, this could cause malnutrition — but you’d have to be noshing on a lot of charcoal-infused pastry to get to that point.

That said, if you do take prescription medications, activated charcoal can cause some problems. Gastroenterologist Patricia Raymond told Women’s Health that if you’re regularly consuming activated charcoal, “And you are also on any meds, even birth control pills, the charcoal is likely to absorb the drugs.”

So it may very well be that the charcoal in your lemonade is actually blocking your body's absorption of the juice's nutrients. While scientists tend to remain skeptical of activated charcoal's use as a dietary supplement, proponents of using the ashy stuff for detoxification purposes recommend taking it away from other foods and medications, according to LIVESTRONG. Otherwise, the only real reason to put charcoal in your ice cream and pizza crust is because pitch-black food sometimes looks cool on Instagram. In the case of the vegan charcoal activated croissant from across the pond, however, the internet seems to have decided it's missed the mark.