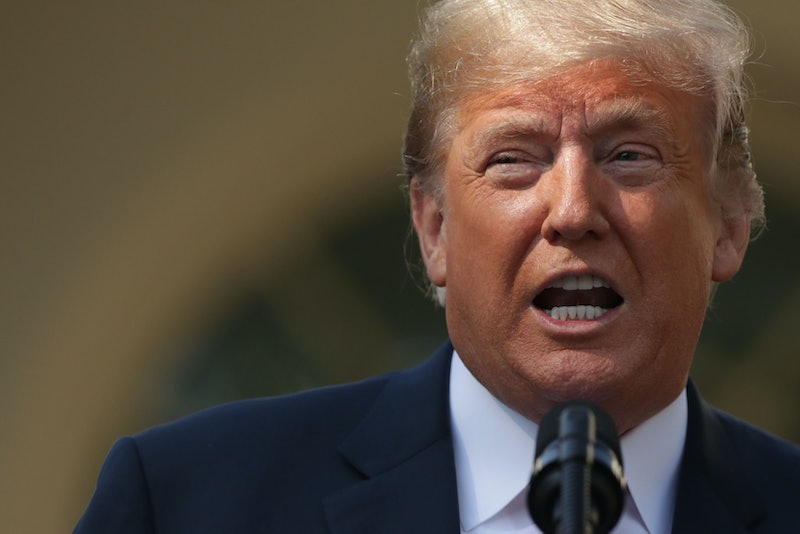 It was two years ago that the Washington Post released the infamous Access Hollywood tape, in which then-candidate Donald Trump bragged about being able to "grab [women] by the p*ssy" without their consent because he's "a star." On Thursday, two different groups of protesters played Trump's Access Hollywood tape on a loop in Washington, D.C., all day long to ensure that Trump's words aren't forgotten any time soon.

The group UltraViolet parked a truck with a TV screen and speakers outside the U.S. Capitol and played the Access Hollywood tape on a loop all day, video and audio both. The Bridge Project, meanwhile, set up loudspeakers outside the Trump International Hotel in D.C. where a group called Women for Trump was meeting, and played audio from the tape.

In the 2005 recording, which surfaced in the last weeks of the presidential election and compelled Trump to make a rare public apology, Trump tells Billy Bush, then the host of Access Hollywood, about his unsuccessful attempts to sleep with a married woman, then says that he kisses and touches women without their consent.

Both of the protest groups tied Trump's comments on the tape to his nomination of Brett Kavanaugh to the Supreme Court. Like Trump, Kavanaugh has been accused of sexual misconduct by multiple women (both men deny all of the accusations). The Senate is set to vote on Kavanaugh's nomination over the weekend.

"On its two-year anniversary, we’re playing the Access Hollywood tape outside Trump’s DC hotel as 'Women for Trump' kick-off their summit inside, reminding them that an admitted sexual abuser is trying to put an accused sexual abuser on the Supreme Court," Bridge Project wrote in a tweet. Meanwhile, the screen tape that UltraViolet had the text "Trump is trying to put another man with a history of sexual assault on the court" displayed next to the video.

It's unclear whether Kavanaugh has the votes to be confirmed. Four crucial senators — Republicans Jeff Flake, Lisa Murkowski, and Susan Collins, and Democrat Joe Manchin — remain publicly undecided on his nomination, and any or all of them could be crucial in deciding the outcome of the vote. Additionally, Republican Sen. Steve Daines announced Thursday that he will be in Montana for his daughter's wedding over the weekend, leaving Kavanaugh with one less vote if his nomination is put to the floor over the weekend.

In a recent interview with the Daily Caller, Trump claimed that NBC leaked the Access Hollywood tape to the Washington Post, and said that it "was illegal, what they did." He didn't elaborate on what specifically he believes was illegal, nor did he offer evidence that NBC leaked the tape. Trump also say that he prepared a lawsuit against NBC over the incident, though no such lawsuit was ever filed.