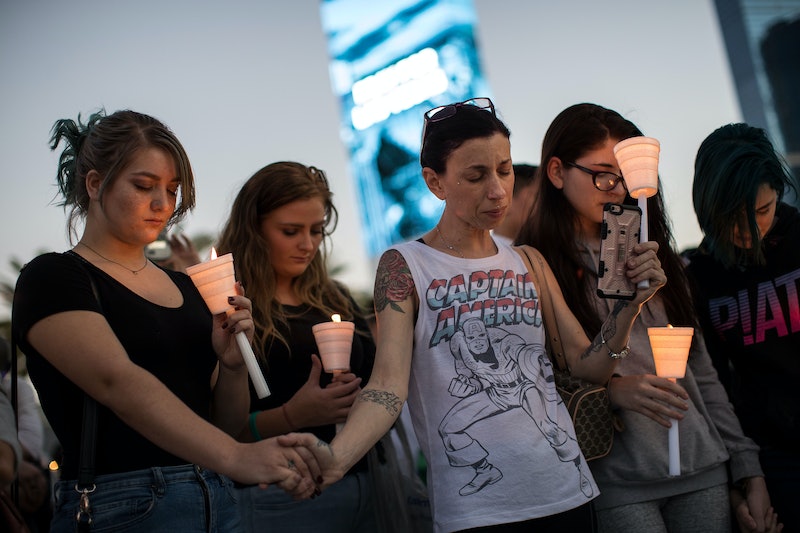 This past Sunday evening, I hosted a game night with some old friends. It was a great time, we played “Celebrity” and laughed so hard we were all exhausted by the end of it. After everyone left, I brushed my teeth and got ready for bed. I know you’re not supposed to look at your phone at night because the light affects your sleep, but I always do anyway, and that’s when I read that at least two people had died in a shooting incident in Las Vegas.

This news always affects me deeply, I take gun violence very seriously. I am a member of the Creative Council for Everytown for Gun Safety and I work hard to make it a thing of the past. However, the world is really bad nowadays. It’s the beginning of October and there have been more mass shootings than days this year, Puerto Rico and the Virgin islands are suffering, a massive earthquake has left Mexico city in shambles, the Rohingyas are being murdered in a major ethnic genocide, and, well, I’m tired. It’s all too much. And I have to get up for work really early in the morning. So, I sigh and say to myself, “at least it was only two people,” and go to bed.

Only two people would have been two too many, but now we know at least 59 people were killed and over 500 more were injured. It was a music festival, where people were hanging out with their friends just like I was that Sunday, and what should have been an epic night of fun and music quickly — in the span of only 20 minutes — turned into the largest and deadliest mass shooting in modern American history.

I’m writing this because it’s gotten to the point where even someone like me, who works hard to create awareness about the gun violence problem in America, is so fatigued about everything going on in the world that I can sigh about about “yet another shooting” and go to bed. “Only two people” is not something any of us should ever say, yet we say and think things like that because gun violence has become so incredibly normal. This should not be normal.

This nightmare is uniquely an American problem.

It wasn’t so long ago that if two people had been shot and killed at that festival we would have all been appalled and incensed. When Columbine happened, we thought, “never again, what a tragedy.” But as a nation, we have a lot more tragedies under our belt. Sandy Hook, Aurora, Lafayette, San Bernadino, Orlando — these names are no longer just a list of places, they’re events that are etched in our hearts, moments that have torn families apart and traumatized us and our children in ways we aren’t yet able to fully grasp. We have cried, prayed, and marched for sensible solutions only to end up being told that this is simply how things are in America.

I’m pleading with you, let this time be different. Please. It has to be.

We can no longer allow ourselves to be the only nation on earth where “yet another mass shooting” is part of the daily vocabulary. We should all find it completely unacceptable that our country’s gun-related homicide rate is 25 times higher than the average of other developed nations. This nightmare is uniquely an American problem. We must do better. Our children deserve better than to inherit a country where this is the norm.

Please, make Nevada our defining moment in this battle against gun violence. We cannot wait for another shooting to have yet another circular argument about gun violence prevention. In the coming days and weeks, pessimism, fatigue, and doubt will take over the national conversation on gun violence, and many will expect us to shrug off any hope we hold for change. And many of us will. We cannot afford to let these feelings take hold. We have to take action now. The movement to change our country for the better is here, it is strong, and it needs you.

I ask you to be strong for your children, for your neighbors, for your friends, and for your country. I invite you to push past the feeling of helplessness and dive into action. Because you can do something. We don’t have to accept our current reality as the new normal. If we wake up and take action now, we can help ensure we never have to wake up to news of a "yet another mass shooting," ever again.

Natalie Morales is an actor, writer, director, and she doesn’t care that you think she should stick to her day job. She cares about her country and the people in it and their right to not get shot.

Visit everytown.org or text “ACT” to 64433 to learn how you can help fight for gun sense legislation supported by a majority of Americans, including gun owners and gun violence survivors alike.

More like this
For These Abortion Clinic Volunteers, Going TikTok Viral Is A Risk Worth Taking
By Audra Heinrichs
Every Single Big & Small Way You Can Fight For Abortion Rights
By Tess Garcia
Windrush Victims Are Still Waiting For Compensation
By Sam Ramsden
Your July 2022 Monthly Tarot Reading
By Jezmina Von Thiele
Get Even More From Bustle — Sign Up For The Newsletter