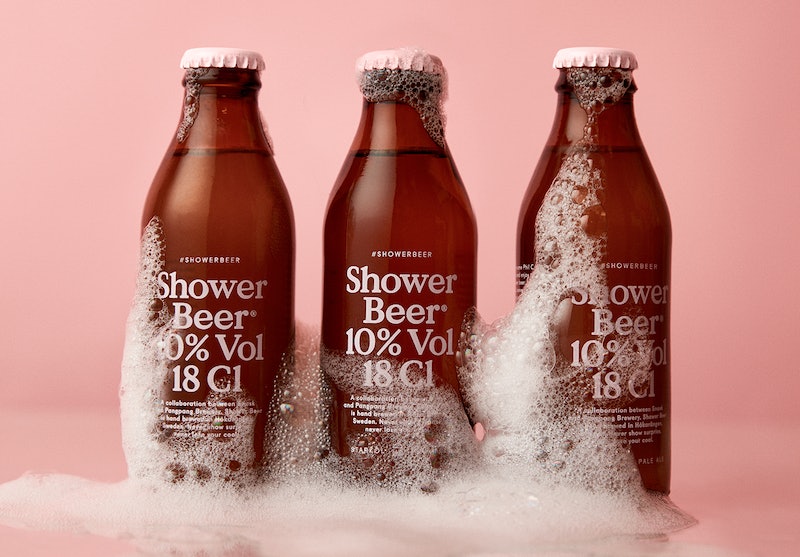 It’s hard to imagine something more refreshing than enjoying an icy brew in a hot shower. Of course, depending on the length of said shower, you may find yourself sipping something far less pleasant towards the end of your rinse — and one design firm wants to fix that. Introducing Shower Beer, the first and only beer meticulously devised to be enjoyed in the (you guessed it!) shower. The Swedish design firm Snask has teamed up with PangPang Brewery to improve on this mundane pleasure, and together they have created a strong but sweet pale ale that pairs well with soap suds and rubber duckies alike.

Whether you are unwinding after a tough day, primping for a night on the town, or need a little hair of the dog the next morning, a shower beer will help you chill. Like a glass of red wine in the tub, it feels luxurious to sip on a hoppy ale in the shower (because let’s face it: This will probably be the closest we’re getting to a swim-up bar for quite some time).

That's where Snask and PangPang's Shower Beer comes in. The pale ale, which is hand-brewed in Southern Stockholm, comes in an 18 cl bottle (approximately 6 ounces), half the size of a regular can of beer — an intentionally small serving size that ensures the beer will be downed before it has a chance to get warm. "We always loved the thought of creating a new type of beer. One that would kickstart the night," Snask's Fredrik Öst tells Bustle. "So we decided to mix these two ideas and create a shower beer that is meant to be sipped in three to four mouthfuls while listening to Dressed for Success." (For those unfamiliar with song, it's a fun, pump-up jam by the Swedish pop-rock '80s duo Roxette.)

With 10 percent ABV, the pale ale packs a wallop for its petite size. It's sleek, lableless design (the pink lettering is screen printed directly on the bottle) keeps your hands clean while rinsing off. Despite the beer's high alcohol-content, the brew is surprisingly easy to drink. "It's a sweet tasting and well-balanced pale ale with notes of citrus," Öst tells Bustle. "It will give the drinker a thought of fruit as well as putting on [your] dancing shoes." Sounds pretty good to me!

Shower beer fans looking to get their hands on this tasty new brew may have to wait quite a while, though. The beer is initially only being offered in Sweden, and demand is high while supply is low . “The first batch sold out instantly and the second one is on it's way," Öst says.

High taxes on alcohol drive up the price of the beer in Sweden, and it remains unclear how much the beer will retail for outside the country. "Right now it retails for $12 a bottle but we are not sure how it will be priced outside Sweden," adds Öst. "We have received incredible amounts of interest from all over the world so we are currently looking for distributors outside Scandinavia in order to be able to shower this whole planet with this brew."

So until Shower Beer comes to a store near you, the next best thing is keeping your beers frosty in a cooler on your bathmat. Cheers!