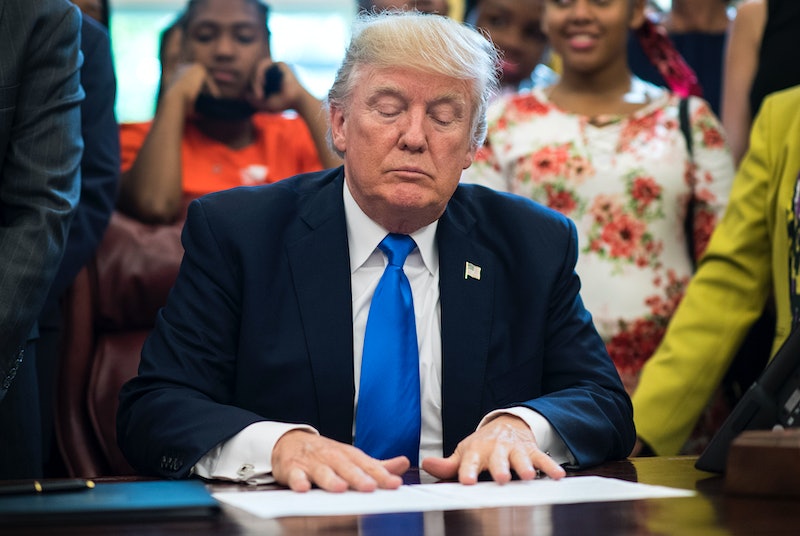 On Tuesday, various conservative media outlets began attacking a new college course called "Trump: Impeachment, Removal or Conviction" as though it's solely dedicated to removing the 45th president from office. Sure, the course name involves the words "Trump" and "impeachment," but right-wing outlets' characterization of it is pretty misleading. Thankfully, the San Diego State University (SDSU) class' course description, as well as a statement from the university, has set the record straight. But the trolls won't give up.

In reality, the course will focus on the notion of presidential power and examine past federal impeachments and removals from office. The one-credit course will be taught in March by Professor John Joseph Cleary and is offered through SDSU's Criminal Justice program.

According to the course description, students will examine the presidential impeachment and removal from a broad standpoint — not just in the Trump era. As the description notes:

Focus will be on the two constitutional grounds: impeachment and removal (25th Amendment), and the possible charges of the independent counsel[.]

Students will also look at the historic role of impeachment and removal in past U.S. presidencies and examine the role of the presidency in great detail. The course description put it:

[The course will focus on] the powers of the president, a history of the creation of that office and the comparison of divine right and rule of law leadership, presidential impeachments, including Nixon's de facto impeachment, practically limitless grounds for impeachment, presidential immunity from indictment, and grounds for impeachment, removal, or indictment covering: conflict of interests, foreign emoluments, climate change, racism, religious bias, improper influence, nepotism, and a host of crimes, including conspiracy, false statements, and obstruction of justice.

According to the description, required reading for the class is The Case for Impeachment by Allan J. Lichtman. The book examines presidential impeachment throughout U.S. history and also "lays out the reasons Congress could remove Trump from the Oval Office."

However, as KUSI, a local San Diego news station, described, the university's statement on the course does not line up with these characterizations. The outlet reported that a spokeswoman from the university described the course as follows:

The course presents an overall framework of impeachment, removal, or criminal investigation of a president and rather than focusing on President Trump, reviews all 19 impeachments in U.S. history.

KUSI further noted that the spokeswoman indicated that the class, which is one-credit unit and takes places on the weekend, is not a requirement for graduation and is not paid for with state funds.

The outlet also reported that one of the authors of the aforementioned Campus Reform article, Brandon Jones, disputed the university's characterization of its course: "The bottom line is they're offering a course with a clear agenda. As far as not being funded by the taxpayers I'm not going to take their word for it."

Overall, while the title of SDSU's course may be misleading — and, perhaps, designed to draw students' attention to the course — it seems that, according to both the course description and the university's own statement, it's by no means solely focused on President Trump. If anything, it goes to show the importance of doing your own research before believing the trolls.

More like this
'The Spy Who Died Twice' Is Based On A Major British Scandal
By El Hunt
The 20 Best Audiobooks To Fall Asleep To
By Aoife Hanna and K.W. Colyard
Watch The Emotional Trailer For Dolly Alderton’s 'Everything I Know About Love'
By Bustle UK
Everything We Know About 'Love Island' 2022 So Far
By Sam Ramsden
Get Even More From Bustle — Sign Up For The Newsletter