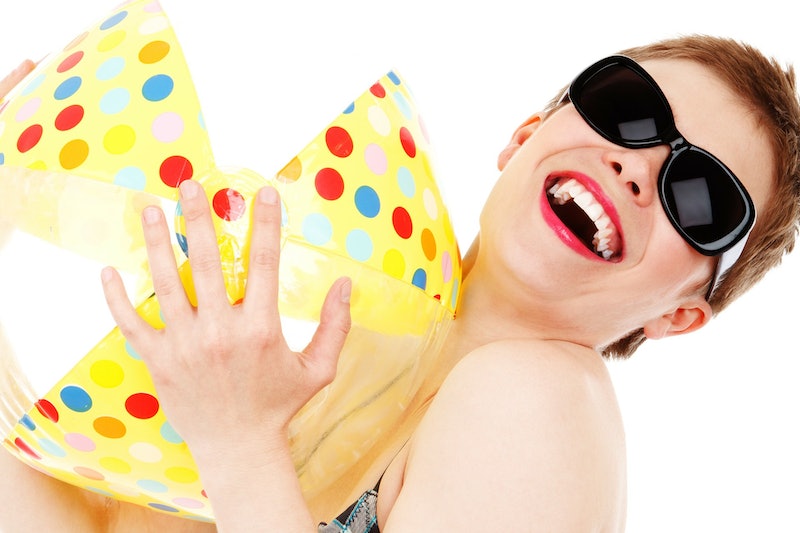 You know how it goes: One minute you’re a human woman, the next you’re an inflatable pool toy. In Saudi Arabia, advertisers photoshopped a woman into a beach ball in an ad for swimming pools. Though images of the bizarre switch have gone viral on social media, this type of censorship — especially of images of women in ads — isn’t particularly unusual in Saudi Arabia.

On Sunday, a Twitter user who goes by “@SilentRuins” tweeted two images of an ad for Intex swimming pools. The original shows a family of five — mom, dad, and three kids — relaxing in a pool. The other image, an ad from SACO, a Saudi Arabian hardware retailer, shows the exact same scene, which a few minor alterations: The father and children have all had dark shirts photoshopped onto them, and the mother… has been replaced by a Winnie the Pooh beach ball. Yes, really. The person who did the photoshop even went to the effort of adding a reflection in the water (which, admittedly, doesn’t quite line up).

In the last two days, @SilentRuins’s tweet has gone hugely viral, racking up 89,000 shares and almost 150,000 likes. Some Twitter users seem bewildered by the change, with one commenting, “My eyes just popped out. What on earth is this monstrosity?”

Some users pointed out that this type of censorship is very common in Saudi Arabia, where images of women are tightly controlled. For example, a similar story previously made headlines in 2012, when furniture retailer IKEA came under fire for releasing a version of its catalog in Saudi Arabia in which images of women had been carefully removed. (IKEA ultimately apologized for the incident.) Some Twitter users explained that, in many cases in Saudi Arabia, images of women on packaging and in magazines are altered simply with the use of a black marker or tape.

My favorite tweets to come out of this are those that delve into the emotional and philosophical complexities of having your mom replaced by a plastic ball.

As Indy100 points out, the image of the mom-turned-beach-ball isn’t a one off: It’s from a larger SACO catalog that features other similar images, including this one:

Guess what that Simba ball used to be? If you’re answer is “a human woman,” you are correct. (You can see the unaltered image here.) Let’s hope this “My mother turned into a beach ball!” disease isn’t catching.